Three Bangladesh Players, Towhid Hridoy, Shamim Hossain And Rakibul Hasan Have Been Sanctioned By The ICC While Akash Singh And Ravi Bishnoi Are The Indian Players To Have Received Big Fines Following The 'ugly' Fight At The End Of The Under-19 World Cup Final.

Bangladesh created history in the Under-19 World Cup as they won their first major ICC tournament by beating India by three wickets in a tense and emotional final at Senwes Park, Potchefstroom. However, following the end of the match, there were unruly scenes which witnessed an altercation between India and Bangladesh players. India Under-19 Cricket Team coach Paras Mhambarey was seen restraining the Indian players. Following the fight which was described as 'ugly' by Indian cricket team skipper Priyam Garg, the International Cricket Council (ICC) has come down hard on the players involved in the fight.

Three Bangladesh players were fined while two Indian players received heavy fines. The Bangladesh players who were punished were Towhid Hridoy, Shamim Hossain and Rakibul Hasan. Rakibul had struck the winning runs as Bangladesh chased down a revised target of 170 in 46 overs after India were bowled out for 177 to win the Under-19 World Cup title. All three were handed six demerit points and found guilty of a level three breach of the ICC code of conduct. 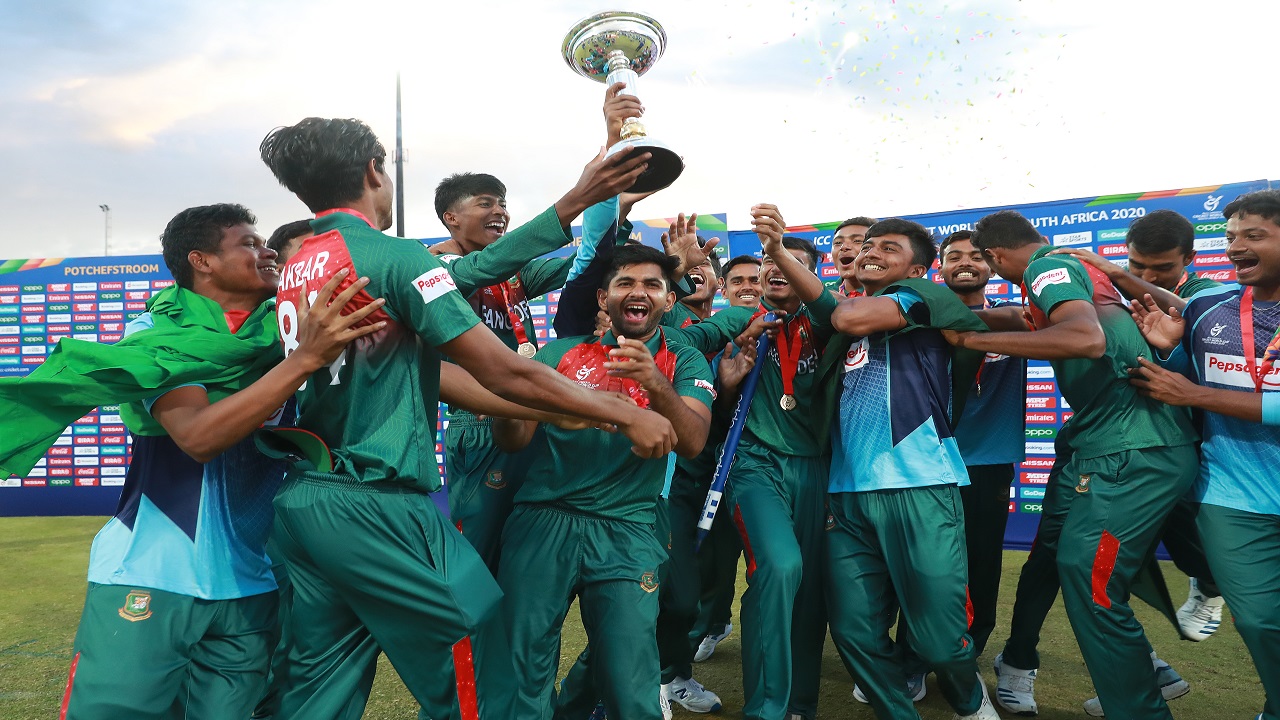 Some Bangladesh and Indian players were involved in an 'ugly' fight after the end of the final. (Image credit: Getty Images)

Akash Singh, the left-arm pacer and Ravi Bishnoi, the legspinner were the Indian players to be sanctioned. Bishnoi, the leading wicket-taker in the 2020 ICC Under-19 World Cup, was handed two demerit points for using "language, actions or gestures which disparage or which could provoke an aggressive reaction from a batter" after dismissing Avishek Das. In addition, he was also given five demerit points for the post-match incidents along with Akash. The suspension points will be applied to the forthcoming international matches the players are most likely to participate in at either senior or Under-19 level.

Following the end of the final, players from both sides got physical as soon as Bangladesh hit the winning runs. One India player apparently rushed to confront and pushed a Bangladeshi player who had allegedly said some disparaging words. More players got involved and the pushing shoving continued for about 40-50 seconds. Following the end of the match, Akbar Ali, the Bangladesh skipper said the incident should not have taken place and he apologised.

Shameful end to a wonderful game of cricket. #U19CWCFinal pic.twitter.com/b9fQcmpqbJ

"Cricket is known for being a gentleman's game. So I'll say, I’ll be sorry for my team. I don’t know what exactly happened. I didn't ask what was going on. But, you know, in the final, emotion can come out, and sometimes the boys were getting pumped, and emotions were coming through. As a youngster, it shouldn't happen. In any position, in any manner, we have to show the respect to the opponent, we should have respect for the game," Akbar Ali said.

Speaking to ESPNCricinfo after the match, India skipper Priyam Garg summed up the Bangladesh reaction. "We were easy. We think it's part and parcel of the game - you win some and you lose some. But their reaction was dirty. I think it shouldn't have happened. But it's okay," Garg said.