Under 19 World Cup: Bangladesh Have Golden Chance To Erase Years Of False Dawns

Bangladesh Entered The Final Of The Under-19 World Cup For The First Time And They Have A Golden Chance To Erase Plenty Of False Dawns That Have Plagued Their Senior National Team Ever Since 2000.

Bangladesh have entered the final of a major ICC event for the first time in their cricketing history. (Photo Credit: Getty Images)

When Akbar Ali slogged Beckham Wheeler-Greenall straight down the ground for a boundary, the jubilation of the Bangladesh cricket team at Potchefstroom was a sight to behold. The boys danced, chants of 'Bangladesh, Bangladesh, Bangladesh'reverberated around Senwes Park. A promise 35 years in the making and 49 years ever since they became an independent nation was now one step closer to fruitition. For the first time in history, Bangladesh had entered the final of the Under-19 World Cup. From the time they started playing cricket in 1985, in their very first game against Pakistan in Moratuwa, their journey has encapsulated plenty of downs and some highs.

From Tyronne Fernando to Senwes Park, the Bangladesh Under-19 boys have a chance to create history and erase so many of the false dawns that has plagued the cricketing side. When Bangladesh first played in 1985, it took them close to 12 years to win their first cricket game and it was against Kenya at the Lal Bahadur Shastri stadium. They would only win overseas in 2003 and that too against a Zimbabwe side that were on their way to losing key players during the Robert Mugabe regime.

Their first win against a major team would come against India when they won by 15 runs on December 26, 2004. They had been promoted the elite list of Test playing nations four years earlier at the start of the new millennium. They won a match against Australia in Cardiff and the cricketing reaction was like an Earthquake measuring 10 on the Richter scale. Despite all this, Bangladesh did not set the world alight. For many years, Bangladesh consistently lost against top teams. Statistics would often refer to achievements by them only as a footnote.

The exploits against Bangladesh would inflate a player's record and thus for geting the right picture of number, the stats against Bangladesh and Zimbabwe would be excluded. Although they won their first Test series in 2004 against Zimbabwe, they struggled against top teams. At the end of the first decade, they managed to beat the West Indies in the Caribbean but that was against a Windies team who were missing their top players due to a contract dispute. In the broader picture, there was nothing to show for Bangladesh in the cricketing world.

With Bangladesh continuing to be the patricians of world cricket, the talk was taking Bangladesh into the cricketing elite circle was a big mistake. They had been defeating top opponents, but consistently, they were underperforming at the Test level and in ICC tournaments. In 2012, Bangladesh went a long way in dispelling the notion that they were minnows. They spoiled Sachin Tendulkar's 100th international century and defeated a strong Sri Lanka side to enter the final of the Asia Cup where they tragically lost by two runs to Pakistan. The tears that flowed in Mirpur was indicative of how badly Bangladesh wanted to make a mark. 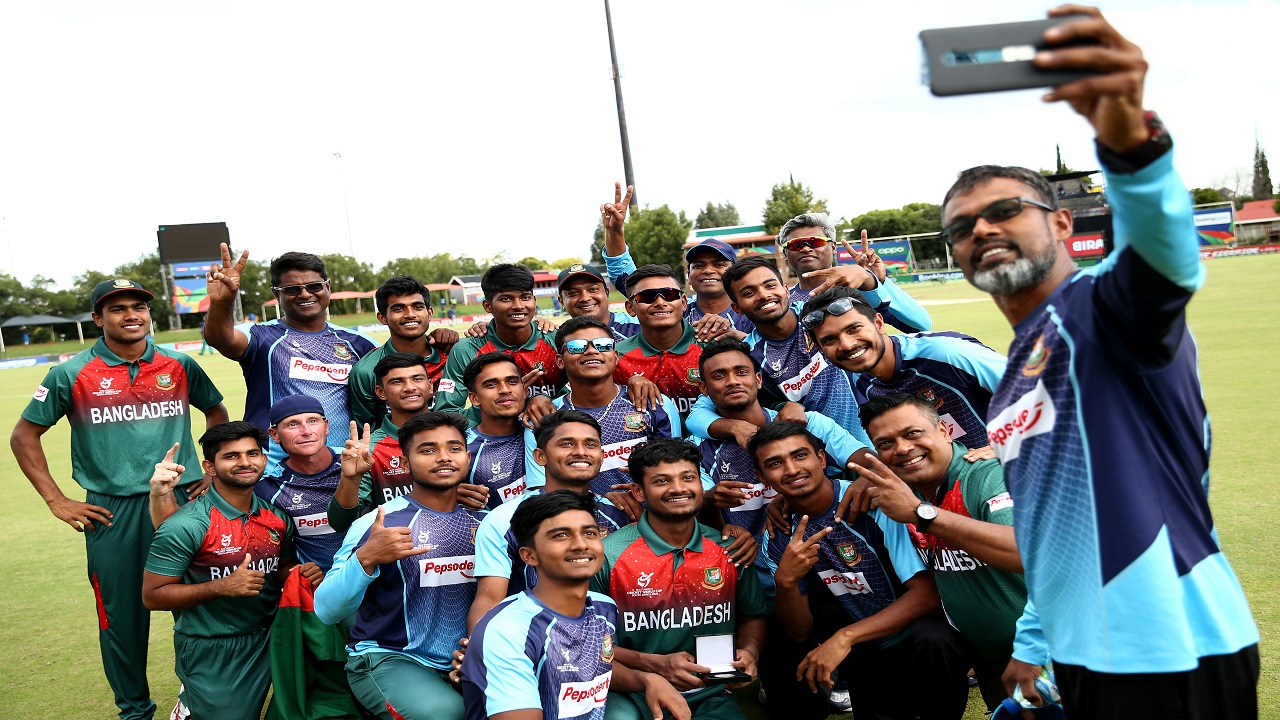 Bangladesh have lost in two finals heading into the Under-19 World Cup while the senior team has suffered plenty of heartbreaks. (Image credit: Getty Images)

In the 2015 ICC Cricket World Cup, Bangladesh finally stepped up into the league of top nations when they knocked England out of the tournament in Adelaide to enter the quarterfinal of the World Cup for the first time. In the last eight, they were undone by a contentious no-ball and Rohit Sharma's century as they were eliminated but the passion from the Bangladesh fans showed that now had the will to do well everytime.

Bangladesh went on to create history by winning a bilateral ODI series against India in 2015 and it was in the midst of a glorious streak where they won series against Pakistan, South Africa, Zimbabwe and Afghanistan. They also reached the final of the Asia Cup and in the Nidahas Trophy Twenty20 tournaments but each time, they would suffer heartbreak against India. Even in the 2018 Asia Cup, India denied them a chance to secure the trophy as they lost on the last ball.

In the tri-nation Under-19 tournament, Bangladesh were beaten in the final by India. In the Under-19 Asia Cup, they could not chase 107 as they lost by five runs with Atharva Ankolekar taking five wickets. Bangladesh have been hurt by India in many tournaments since 2016. Each time when Bangladesh think they have a chance of a golden title, the dream was brutally shattered by India. On February 9, Bangladesh have a golden chance to undo years of pain.

Defeating this current Indian cricket team under Priyam Garg will be a monumental task. They have players like Yashasvi Jaiswal, Kartik Tyagi, Sushant Mishra, Ravi Bishnoi and Divyansh Saxena who display a level of confidence and maturity that belies their years. The bowling and batting in the ongoing tournament has been sublime from India while Bangladesh have also shown spark of brilliance.

If Bangladesh do upset India, then February 9 will join a list of golden dates for Bangladesh which will include March 26, 1971, March 31, 1986, November 10, 2000 as definitive turning points in the history of the country. For all the players strikes of the previous year, the finals losses, the lack of infrastructure in their cricket, for all the brickbats received in two decades for not competing consistently with the top teams, a win on February 9 will erase all the pains the senior national team underwent. The boys of Bangladesh have the potential to help the cricket in their country traverse a different course should they secure glory in Potchefstroom.