India's World Cup Selection May Have Faded Away With Each Passing Day But The Selection Encircling Vijay Shankar Ahead Of India's 'preffered Number Four' Seems To Be An Inescapable Sight Of The Social Media Users.

India's World Cup selection may have faded away with each passing day but the selection encircling Vijay Shankar ahead of India's 'preferred number four' seems to be an inescapable sight of the social media users. One of which surrounds Ambati Rayudu and Vijay Shankar. Every time we see these two cricketers performing and working regressively on the cricketing field, it is believed that two have different set on skills which shouldn't have been kept on the same page at first sight.

However, when the Board of Control for Cricket in India (BCCI) selection committee had announced a 15-member squad for the premier 50-over tournament on April 15, MSK Prasad said, "After the Champions Trophy, we have tried quite a few middle-order batsmen, which also included Karthik, Shreyas Iyer, Manish Pandey. We did give a few more chances to Rayudu but Vijay Shankar gives three dimensions. He can bat, if the conditions are overcast he can bowl, plus he is a fielder. We are looking at Vijay Shankar as a No. 4. Now we have plenty of options for that slot."

Post this, three dimensions took a toll as almost everybody including the likes of Ambati Rayudu, Virat Kohli, and others started to use this term on every other ocassion which is known to the cricketing fraternity around the globe.

Here, just for a moment, we rewind the clock back to October 2018, when the team management along with the skipper first thought of introducing Ambati Rayudu into the setup, Virat said, "Rayudu has taken his chance with both hands. We need to back him till the 2019 WC (World Cup). He reads the game well, so we are happy that someone intelligent is batting at number four."

Everything was going well for Ambati Rayudu. Runs were flowing, the team was backing, selectors were on his side, and he was performing decently. But then, all of a sudden, Hardik Pandya and KL Rahul were suspended from the tour and were asked to come back from Australia tour with immediate effect. Vijay Shankar and Shubman Gill were the replacement announced by the BCCI for the series. 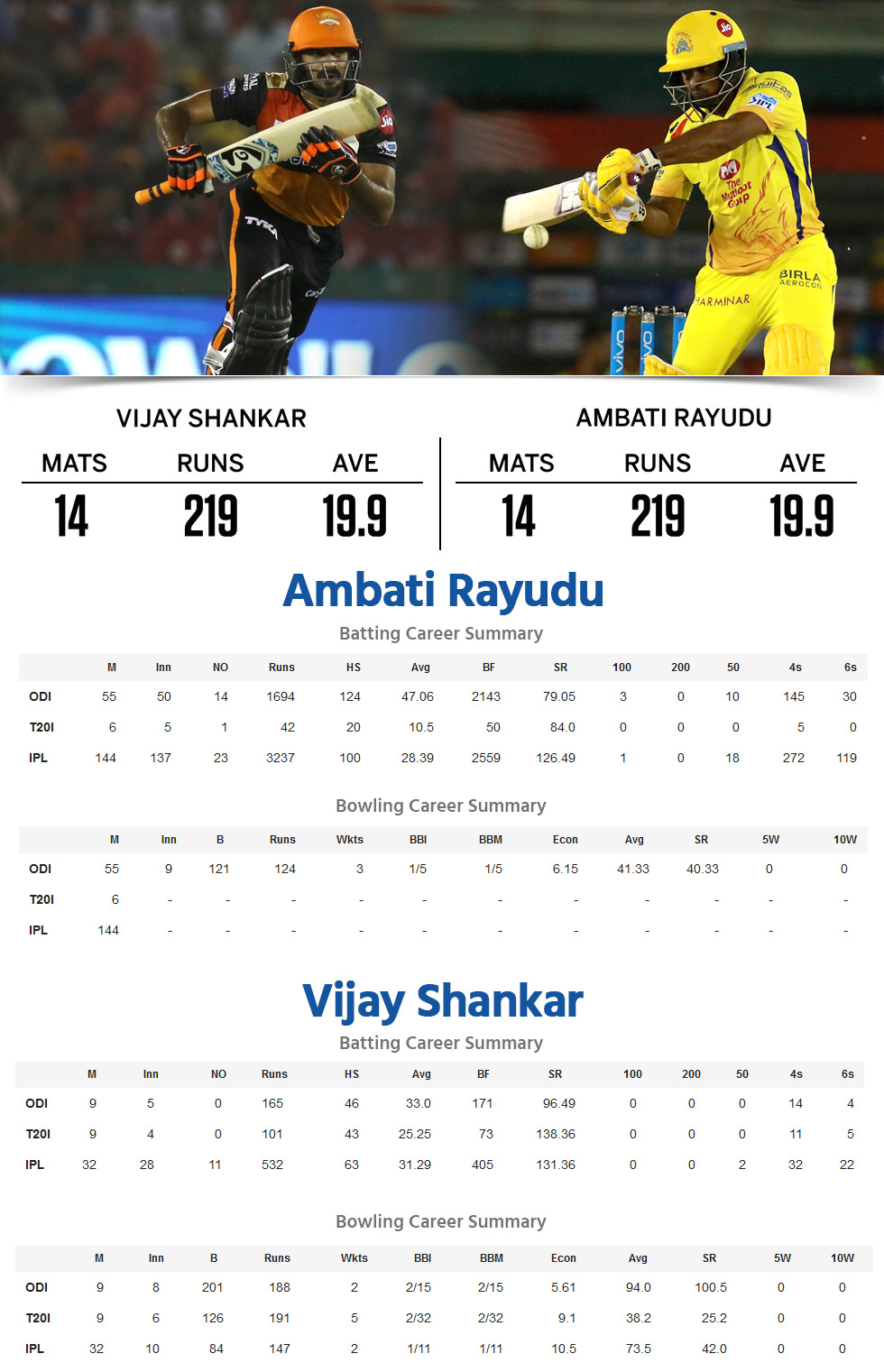 In Hardik Pandya's absence, the team tried Vijay Shankar for that position and he was able to grab it with both hands. His consistent performance led him to feature in the squad even in the presence of Hardik Pandya. With two seaming all-rounders in the squad, team India's squad started to look more balanced.

Ambati Rayudu, on the other hand, continued to feature in India's playing XI in the series against Australia and New Zealand. During his overseas stint, he managed to play a superlative knock against New Zealand when he smashed 90 runs in the final ODI. On that tour, almost everybody else struggled to get runs under their belt and Rayudu stood strong to play one heck of an innings.

He ended the New Zealand series on high, which made him feature in India's last home series before the World Cup against Australia, where he managed to score just 33 runs in the three games he played. And all of a sudden, his selection for the World Cup surrounded more questions than one thought at that stage.

India dropped him from the playing XI and tried Vijay Shankar at number four, who once again grabbed his opportunity and scored some important runs and bowled well.

At the end of the series, on March 13, Virat Kohli was asked whether the performances in Indian Premier League affect the selection chances for the World Cup, he said, "No, I don't see the IPL having any influence on World Cup selection. I think that will be a very, very radical sort of analysis."

But seeing it from a realistic point of view, one has to accept, that it did. In the case of Vijay Shankar and Ambati Rayudu, what made the selectors go with former over latter?

Yes, Either option stands strong each time he scores big or the other fails. And now that IPL 2019 league stage is over, who has nudged ahead of the other in this little competition? Well, both Shankar and Rayudu finished with identical batting numbers at the end of their respective 14 matches in the league stage.

Both Rayudu and Shankar have finished with a tally of 219 innings with a similar average of 19.90. However, Shankar played an innings less, while holding a stronger strike rate of 120.32. And on the other hand, Rayudu scored a half-century - a match-winning 57 against Rajasthan Royals in Jaipur on April 11.

Interestingly, the squad for the World Cup was announced on April 15, and before that Chennai Super Kings and Sunrisers Hyderabad had played 8 and 7 games respectively. The two players have an identical number with Rayudu managing to score 138 runs, and Shankar scoring six runs less than him.

However, Shankar doesn't bowl often in international cricket. Remove Kedar Jadhav from the playing XI and he will be the sixth bowling option for India. But when CSK were up against SRH just an evening after the huge announcement, the match was presented on social media and on television as Shankar vs Rayudu. Little later, Shankar was dragged into the attack when Rayudu took the crease. He almost got better of the batsman when Rayudu had nearly dragged the outside-off length ball onto the stumps. The duel lasted for only five deliveries with Rayudu managing only fours runs.

CSK and SRH have both qualified for the playoffs and hence their batting numbers are bound to change. But will they come face-to-face against one another one last time in IPL 2019 before World Cup? - Well, time will tell.

To sum it up, Vijay Shankar didn't do much good to his selection but Ambati Rayudu surely did all bad in the last days before selection to miss out from the World Cup squad.

Disclaimer: The opinions and facts expressed within this article are the personal opinions of the author. They do not reflect the views of News Nation. The NNPL does not assume any responsibility or liability for the same.