Virat Kohli, Most Expensive Drop Of The Century And The Nightmare Of The Basin

Virat Kohli Returns To The Venue Where In The 2014 Test, He Dropped A Simple Catch Of Brendon McCullum Which Went On To Cost India The Series As The-then New Zealand Skipper Went On To Script History.

Brendon McCullum became the first New Zealand player to hit a triple century in Tests during the 2014 match against India at the Basin Reserve. (Photo Credit: Getty Images)

The Basin Reserve in Wellington has not been kind to the Indians. They have won only once which was 52 years ago. Virat Kohli's Indian cricket team return back to the venue ahead of the first Test beginning on Friday. To call the Basin Reserve the ultimate nightmare for India will not be far from the truth. The venue has broken the hearts of Indian cricket fans a lot of times, none more so than the 2014 Test which saw the most expensive dropped catch ever. It witnessed Virat Kohli, Brendon McCullum and a New Zealand revival which was unbelievable.

The Indian cricket team's 2014 tour of New Zealand was becoming a nightmare. MS Dhoni's team were crushed 4-0 in the five-match ODI series with the Indian cricket team narrowly avoiding a 5-0 whitewash thanks to the exploits of Ravindra Jadeja in Auckland that saw the game being tied. In the Test match at Eden Park, Brendon McCullum smashed a double century and superb bowling from Neil Wagner gave New Zealand a 40-run win as they took a 1-0 lead in the two-match series. India headed into the second Test at the Basin Reserve in Wellington, with India not having won a Test at the venue since 1968.

India were well on course to level the series. Ishant Sharma took 6/51 to bowl New Zealand out for 192 and India managed a lead of 246 runs with Shikhar Dhawan hitting 98 and Ajinkya Rahane chiping in with a suprb 118. New Zealand were in tatters in the second innings and looked set for a big innings defeat. India were on course to break the rut at the Basin Reserve. Brendon McCullum held the key. In the first ball of the 29th over before the lunch break, the defining moment of the game was registered.

Mohammed Shami bowled a full ball on middle stump, McCullum drove uppishly to silly mid on. MS Dhoni, the master strategist, had realised that McCullum could fall for the trap and he did. However, Virat Kohli, the fielder positioned at silly mid on, leapt and decided to take the catch one-handed. Kohli ended up spilling the catch. McCullum was on 9. New Zealand lost Latham before the lunch break and at 94/5, it seemed the game was up for New Zealand. However, little did Dhoni, Kohli and India realise that the dropped catch of McCullum would turn out to be one of the costliest drops in the modern era.

Brick by brick, New Zealand staged a remarkable rebuilding exercise. McCullum, aided by Watling and debutant James Neesham, put in an exhibition of Test match batting which punished India for over 175 overs. India toiled for 210 overs as the Basin witnessed a turnaround for the ages. McCullum, who had taken a long time to get off the mark and had survived a dropped chance, decided to rewrite the history books. He went the Virender Sehwag way, notching up milestones either by hitting a four and a six. He survived another dropped chance of Ishant Sharma. It looked like the force was with New Zealand and McCullum.

He notched up his four with a drive off Ravindra Jadeja. After going past 5000 runs, McCullum blasted a six off Ishant to notch up his ninth century. New Zealand managed to take the lead and he went past 150 by cracking Zaheer Khan to the deep extra cover fence. At the other end, Watling was grinding down the Indian bowlers and he capitalised on the scoring opportunities as well. Watling notched up his hundred, McCullum reached his double century with a four off Zaheer and the partnership went past 300. New Zealand were nearing safety but the job was not yet done. 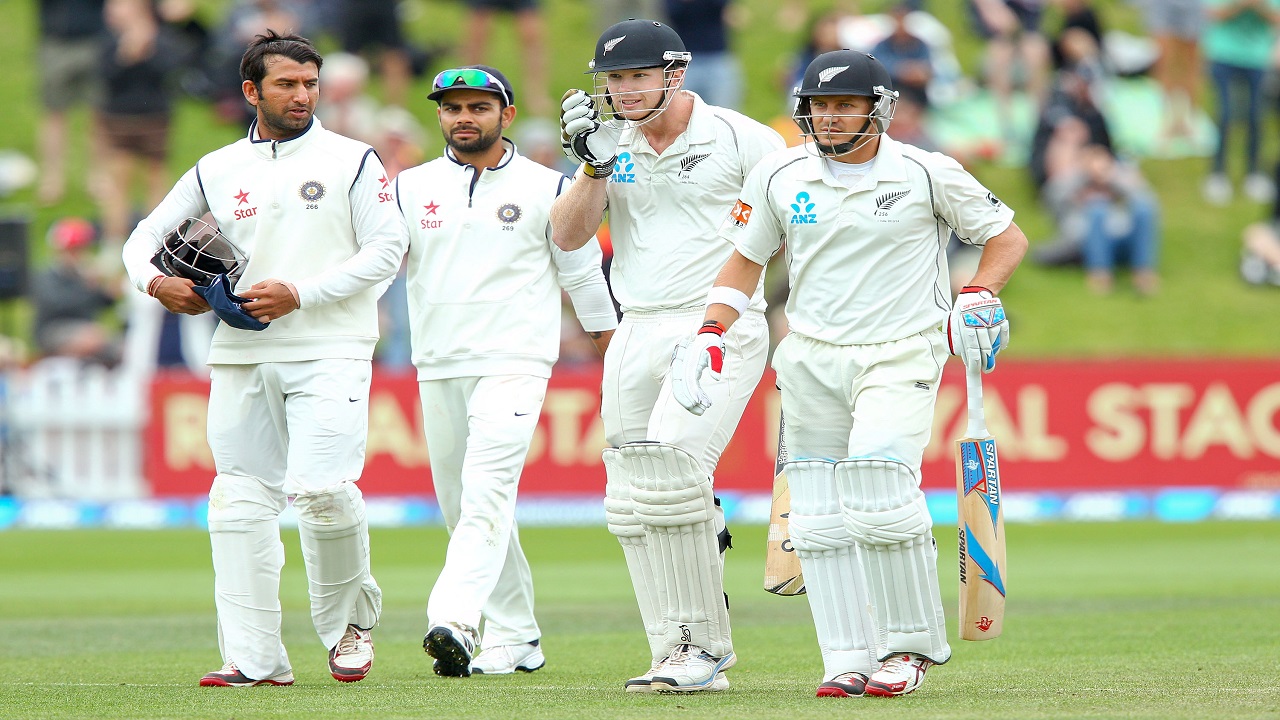 The partnership went past 350 but Watling fell for 124 as the 352-run stand became the highest-ever for the sixth wicket. But, New Zealand were still not out of the woods. McCullum blasted a six off Shami to go past 250 while James Neesham started aggressively. After going past Stephen Fleming's mark of 274, McCullum neared a milestone where no New Zealand player had ever reached while Neesham stroked an aggressive fifty. With the match now safely in New Zealand's grasp, the records poured in. Neesham reached a 100 on debut but McCullum created history as he cut Zaheer to the square third man fence to become the first New Zealand player to hit a triple ton in Tests.

For years, Martin Crowe's 299 against Sri Lanka was the highest by a Kiwi player in Tests. Now, New Zealand finally had a triple centurion in Tests. McCullum fell for 302 but Neesham ensured New Zealand had registered their highest score in Tests with 680/8 declared. Kohli, in order to make up for that dropped catch, scored a century but New Zealand had managed to draw the Test and win the series. For Kohli, the phrase 'catches win matches' caught up with him at the Basin. Only in this case, it was 'catches level series' and he botched it. The drop by Kohli resulted in 293 runs for McCullum while New Zealand benefited to the excess of 576 runs. Indeed, it was a costly miss.