Virender Sehwag Became The First Indian Cricketer To Hit A Test Triple Century When He Smashed 309 In The Multan Test Against Pakistan To Help India Get Their First Win Against Their Arch-rivals In Their Home Turf..

Before 2004, there was no Indian batsmen who had hit a triple century. From the land that gave Sunil Gavaskar, Sachin Tendulkar, Vijay Hazare and other great batsmen, it was surprising that no one had scored a triple century in Tests. In 2001, VVS Laxman had come close when he smashed a world-changing 281 against Australia at the Eden Gardens in Kolkata to halt Australia's 16-match winning streak. However, from 2002 to 2004, the Indian cricket team was starting to shatter their tag of 'Tigers at Home and Lambs Abroad' by winning a Test match after 16 years in England and 22 years in Australia.

After drawing in both the countries, India headed to Pakistan for the first time in 15 years and it was historic in everyway. After winning the ODI series 3-2, India headed into the Multan Test high on confidence. However, this Test match saw a certain player step up and change the way Test cricket is being played. When Virender Sehwag smashed a century on Test debut in tough conditions and smashed a century off 75 balls in an ODI, it made him a special talent. His exploits earned him the title 'The Nawab of Najafgarh'. However, in the first two days of the Test in Multan, he would transform from the 'Nawab of Najafgarh' into 'The Sultan of Multan' as he created history.

India chose to bat on a flat track at the Multan Cricket Stadium and immediately, Sehwag tore into the Pakistan attack. He smashed boundaries at will while his opening partner Aakash Chopra made slow progress to grind the bowlers down. Sehwag notched up his fifty quickly and he proceeded to reach his century off just 107 balls in grand style by smashing Shoaib Akhtar for a four and a six.

India lost Chopra and skipper Rahul Dravid cheaply but Sehwag was joined by his idol Sachin Tendulkar and they proceeded to ensure Pakistan could not come back in the contest. Sehwag continued to notch up his milestones in grand style by hammering a four off Akhtar to notch up his 150. Sehwag continued to score at better than a run-a-ball as he hit three boundaries in one over off Abdul Razzaq. Sehwag neared his 200 with a four off Saqlain Mushtaq and reached his double century with a couple. Tendulkar also started making good progress and he notched up his fifty with a boundary off Shabbir Ahmed. 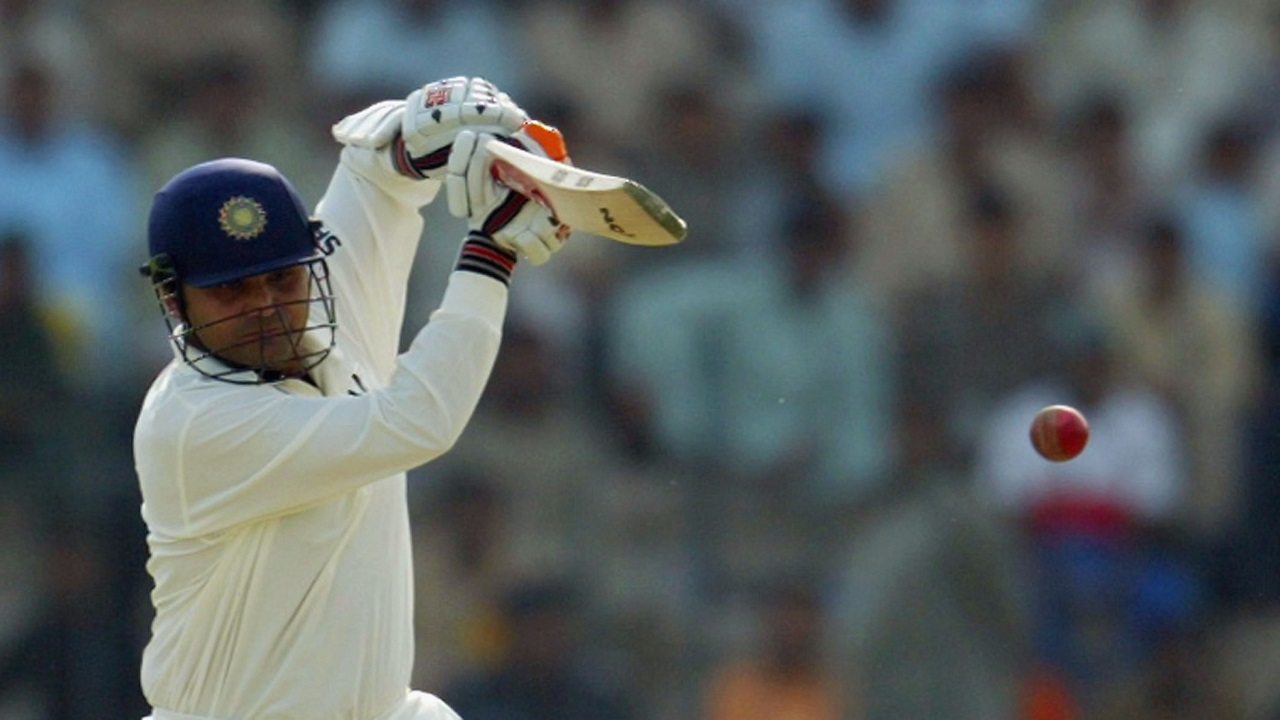 Sehwag ended day 1 on 228 and he admitted that heading into the second day that having the chance to become the first Indian to score a triple century in Tests was playing on his mind. At the start of the second day, Sehwag started with two fours off Mohammad Sami and he notched up his 250 off 299 balls. Tendulkar notched up his century with three runs off Razzaq while Sehwag went past VVS Laxman's individual mark of the highest Test score by an Indian when he hit three boundaries off Shabbir Ahmed.

Sehwag went to 295 with a couple of Akhtar and at 1 PM, Sehwag launched Saqlain over deep midwicket for a massive six and he became the first Indian player in history to hit a triple century. Sehwag fell for 309 and his third-wicket partnership of 336 with Tendulkar beat the previous best of 316 made in Chennai in the 1991-92 series against England.

The eventual Indian total, 675 for 5 declared, was the highest ever against Pakistan, beating the 531 for 9 at Chennai in 1961. Spurred by that performance, India were boosted by magnificent bowling from Anil Kumble and Irfan Pathan as India won the match by an innings to secure their first-ever win in Pakistan after playing each other for 52 years.

India lost the second Test in Lahore but boosted by Rahul Dravid's brilliant 270 in the third and final Test in Rawalpindi, India won the match and registered their first-ever series win in Pakistan. It was a historic tour in every sense of the way and Sehwag laid the foundation for his brilliance in Multan. He went on to become one of the few players in Test history to hit two triple tons in Tests and he almost had a third against Sri Lanka in Mumbai but he fell for 293. Sehwag's game-changing approach in Tests started in Multan and the world was never the same again.