Borussia Dortmund Beat Top-of-the-table Borussia Moenchengladbach 1-0 To Jump To Fourth In The Bundesliga, Level With Bayern Munich Who Earlier Dropped Points In A 2-2 Draw At Augsburg.

Borussia Dortmund beat top-of-the-table Borussia Moenchengladbach 1-0 to jump to fourth in the Bundesliga, level with Bayern Munich who earlier dropped points in a 2-2 draw at Augsburg.  The top of the Bundesliga grew even more congested with the top nine separated by just two points. Of the eight who have played so far this weekend, only Eintracht Frankfurt and Dortmund have won. Gladbach remained top, ahead of Wolfsburg, who drew 1-1 at RB Leipzig, on goal difference. Both have 16 points from eight games. Bayern, Dortmund and Leipzig are all one point behind. Then come four teams on 14 points, including Freiburg, who could have gone top but lost 2-0 at Union Berlin, and Bayer Leverkusen, who could also have taken over first, but lost at Frankfurt on Friday. Schalke have a chance to seize top spot when they visit Hoffenheim on Sunday.

In Dortmund, Thorgan Hazard's first-half strike for the home team against his former club was ruled out by VAR for a tight offside call.  Hazard then found a sprinting Marco Reus with a perfect through ball in the 58th minute. Reus slotted home for the only goal of the game. Even though another Dortmund strike was erased by VAR in the 85th minute, the home team finished the game hanging on, adopting a back-five and even a back-six in added time to end a run of three successive draws.

"We are very, very happy that our efforts were rewarded with victory today. You could see that the game could have turned in the other direction," said Reus.  Coach Lucien Favre didn't hide his annoyance with the two tight VAR decisions that went against his side. "That the two goals were not given is not good for football," lamented the Swiss coach. Dortmund started without 19-year-old attacker Jadon Sancho who was dropped for "disciplinary reasons". "Jadon is a great kid, but he is still very young," Dortmund director of football Michael Zorc told German television before kick-off. "The decision was not easy, but there was no other choice. The suspension is only active for today." German media reported Sancho had returned late from England duty.

Reigning champions Bayern, meanwhile, slipped up for the second league match in succession, having lost 2-1 at home to Hoffenheim before the international break. Augsburg grabbed a rapid lead -- just as they had in the corresponding fixture last year -- when Marco Richter found the net with a sweetly-struck volley just 30 seconds after kick-off, the fastest goal of the season so far. 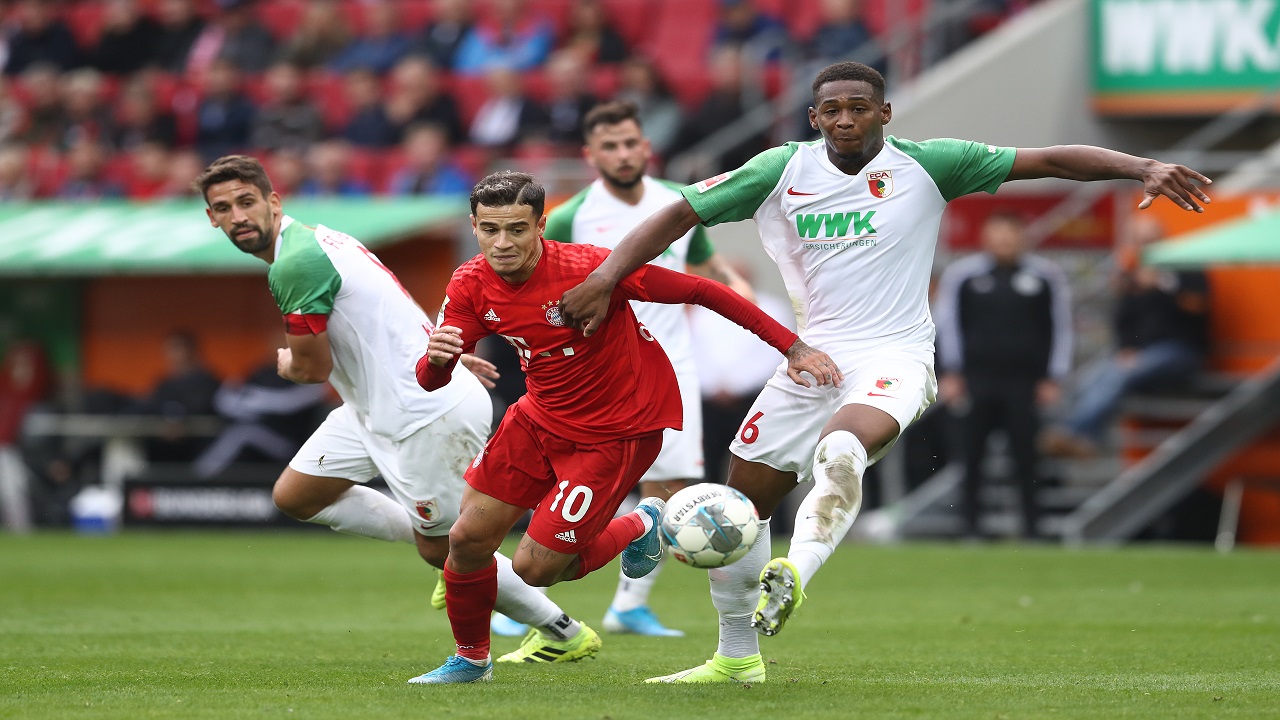 Bayern Munich slipped up for the second league match in succession, having lost 2-1 at home to Hoffenheim before the international break. (Image credit: Getty Images)

Bayern replied as Robert Lewandowski stretched his scoring streak to eight games in the 14th minute from a Serge Gnabry cross. After a host of missed chances, former Arsenal winger Gnabry then put Bayern 2-1 ahead after 49 minutes. But a strong run in injury time by Sergio Cordova set up Alfred Finnbogason, who finished past Manuel Neuer to earn a point for Augsburg, and put another early dent in Bayern's title defence. Thomas Mueller missed two chances after coming on as a late substitute after a week of controversy over the fact he has not started a game since September.

Timo Werner scored his first goal in five games for Leipzig in a tight tussle against Wolfsburg at the Red Bull Arena. It was not enough. Wolfsburg scored a late equaliser when Dutch striker Wout Weghorst finished a William cross to keep the race at the top close. Wolfsburg are the only unbeaten team in the division. At the Weserstadion, Werder Bremen opened the scoring at home against Hertha Berlin as Josh Sargent's strike took a deflection on its way into the net in the seventh minute.

Dodi Lukebakio hit back in the 70th minute for Hertha to secure a 1-1 draw. He beat three defenders, including Theodor Gebre Selassie twice, in a mazy run from the wing. Union Berlin claimed just the second win of their debut top-flight season by beating Freiburg at a bouncing Stadion an der Alten Foersterei.