Mowing The Lawn, Watching TV, Playing With Dogs - How Footballers Are Coping With Coronavirus Lockdown

At Barcelona, Players Are Following A "specific And Personalised" Programme Set By The Club Which Is Monitoring Their Efforts Remotely Using Biometric Tags As Many Sportsmen Are Writing About The Unfamiliar Experience On Social Media Due To The Coronavirus Pandemic

Sergio Ramos posted a video on Instagram showing him sprinting on a treadmill as footballers cope with the coronavirus pandemic. (Photo Credit: Getty Images)

Mowing the lawn, playing football with your dog, turning on the TV... footballers around Europe are struggling to fill the "big void" created by the coronavirus shutdown. Many are writing about the unfamiliar experience on social media. Some have already come to the conclusion that "there is nothing to do". Real Madrid players, forced into quarantine by a case of coronavirus in the club's basketball squad, have been training at home, where most of them already had facilities and equipment. Captain Sergio Ramos posted a video on Instagram showing him sprinting on a treadmill. Marco Asensio, who suffered a knee injury last summer, posted a video showing that he was continuing his recovery programme in his garden. But even for sportsmen used to working out, there is a limit.

"I'm here, in my garden, there's nothing to do," French striker Karim Benzema said in a video on social media where he appeared alongside his dog, earning him a comparison with Will Smith in the post-apocalyptic film "I am legend".

Fabien Causeur, a Real Madrid basketball guard, has launched a live video channel to show his quarantine challenge. He has been taking on athletes and celebrities in three-minute simultaneous excercise including Thibaut Courtois, the Real Madrid goalkeeper, and NBA star and former Real Madrid teammate Luka Doncic.

At Barcelona, players are following a "specific and personalised" programme set by the club which is monitoring their efforts remotely using biometric tags. Luis Suarez had been a step ahead of Ramos, posting a video of himself trudging on a treadmill last week. In Italy, Juventus midfielder Douglas Costa filmed himself practising his dribbling in his back garden with his dog struggling to fill the role of defender.

Alexis Sanchez, on loan to Inter Milan, has two golden retrievers and a much bigger garden but he comfortably outplayed them in a video he put up online. He also posted photos of himself topless, gathering chopped wood. Jessica Melena, the wife of Ciro Immobile posted a cookery video on Instagram, showing the Lazio striker waving a spatula and mixing a cake while she coached him. Immobile posted his own video in which he juggled furry toys with his feet. Napoli's Belgian forward Dries Mertens posted pictures of a work out with a huge bottle of red wine. 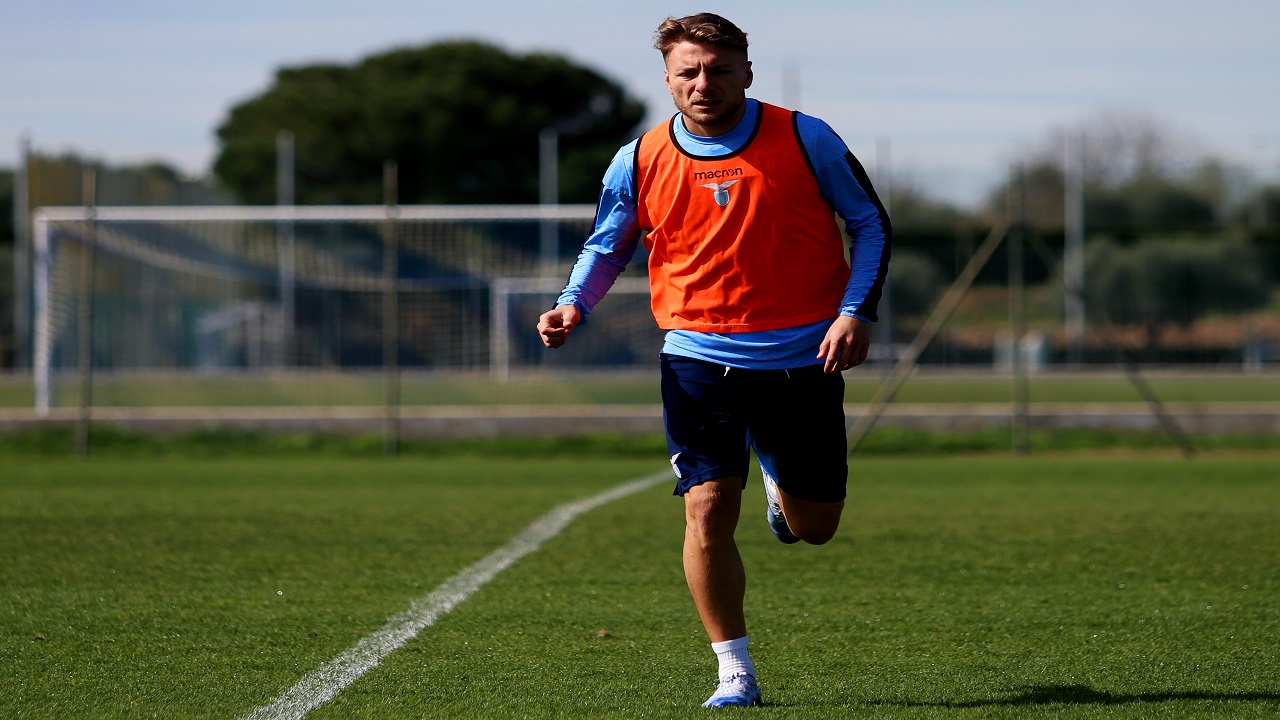 Ciro Immobile has also posted a video where he is baking a cake as football goes into lockdown in Italy due to coronavirus. (Image credit: Getty Images)

In France, Strasbourg midfielder Adrien Thomasson, was looking ahead to another empty week. "We'll have nothing to do, in the middle of the season, it's never happened before. Our habits have been turned upside down," he said. Thomasson is a ski fan but as other sports are also at a standstill that leaves a "big void" for this ski lover. "I'm going to watch series, movies, it's going to be really limited." Television is also the refuge for James Lea Siliki, a Rennes midfielder, who tweeted the times of a couple of French quiz shows. Later he admitted a passion for a French TV karaoke show adding "I'll spare you my voice".

Romain Thomas, a defender at Angers, said his daily routine involved jogging, gardening and watching French reality TV. He said he has talked to team-mates. "We said to each other: 'Look, it's a beautiful day, it's time to mow'. So I mowed the lawn in the garden, it gives me time to think about something else."