Juventus Move Two Points Ahead Of Inter Milan, Who Were Held 1-1 By Atalanta At The San Siro On Saturday, After Going Two Goals Up In Just 10 Minutes In Rome Thanks To Cristiano Ronaldo.

Cristiano Ronaldo stretched his goal-scoring streak to six consecutive league games as Juventus took top spot in Serie A on Sunday with a 2-1 win at Roma, whose defeat was made worse by the cruciate ligament injury of rising star Nicolo Zaniolo. Juventus move two points ahead of Inter Milan, who were held 1-1 by Atalanta at the San Siro on Saturday, after going two goals up in just 10 minutes in Rome. "We were very good for 60 minutes. Then, if you play against Roma, it is almost inevitable to suffer in the end," said Juventus coach Maurizio Sarri. Turkish defender Merih Demiral found a way through after three minutes when he connected with a Paulo Dybala free-kick. Minutes later Argentine Dybala was hauled down in the box, and Ronaldo stepped up to convert from the spot to make it nine goals in six league games.

"It's tough playing against a team like Juventus and we gave away two early goals," said Roma coach Paulo Fonseca. "We put in a good performance after that, against a great side. But once you go two goals down, it's difficult." Both sides had casualties in the first half with Demiral limping off with a knee injury not long after scoring his first Juventus goal.

And Zaniolo was stretchered off in tears eight minutes before the break after falling victim to what Roma later confirmed was a ruptured anterior cruciate ligament in his right knee while trying to dribble past Matthijs De Ligt and Adrien Rabiot. Zaniolo, who is considered one of Italy's most exciting young talents and was a rare bright point for Roma in a torrid first half, will undergo surgery on Monday. "I swear to you ... I'll be stronger than before," the 20-year-old later wrote on Instagram.

Roma had their chances with Edin Dzeko hitting the post and Wojciech Szczesny denying Cengiz Under from point-blank range. Diego Perotti pulled a goal back for the hosts from the penalty spot on 68 minutes after an Alex Sandro handball. However, the capital side drop to fifth, outside the Champions League places, level on 35 points with fourth-placed Atalanta and seven behind local rivals Lazio after their 1-0 win over Napoli on Saturday. Earlier, Alejandro Berenguer struck the only goal as Torino beat Bologna to climb to seventh. Spaniard Berenguer finished off a cross from captain Andrea Belotti on 11 minutes as Torino move two points off sixth-placed Cagliari, who are in the last Europa League place.

Hellas Verona are two points behind Torino in eighth after snatching a 2-1 win over Genoa in a game which was delayed for 15 minutes in order to redo the uneven lines of the two penalty areas. A pitch inspection at Verona's Stadio Bentegodi before the the home side's win -- which also left Genoa in the relegation zone -- found that the lines marking the penalty box were visibly not straight. Genoa's local rivals Sampdoria moved five points clear of the drop zone with veteran striker Fabio Quagliarella scoring a brace in their thumping 5-1 win over Brescia. 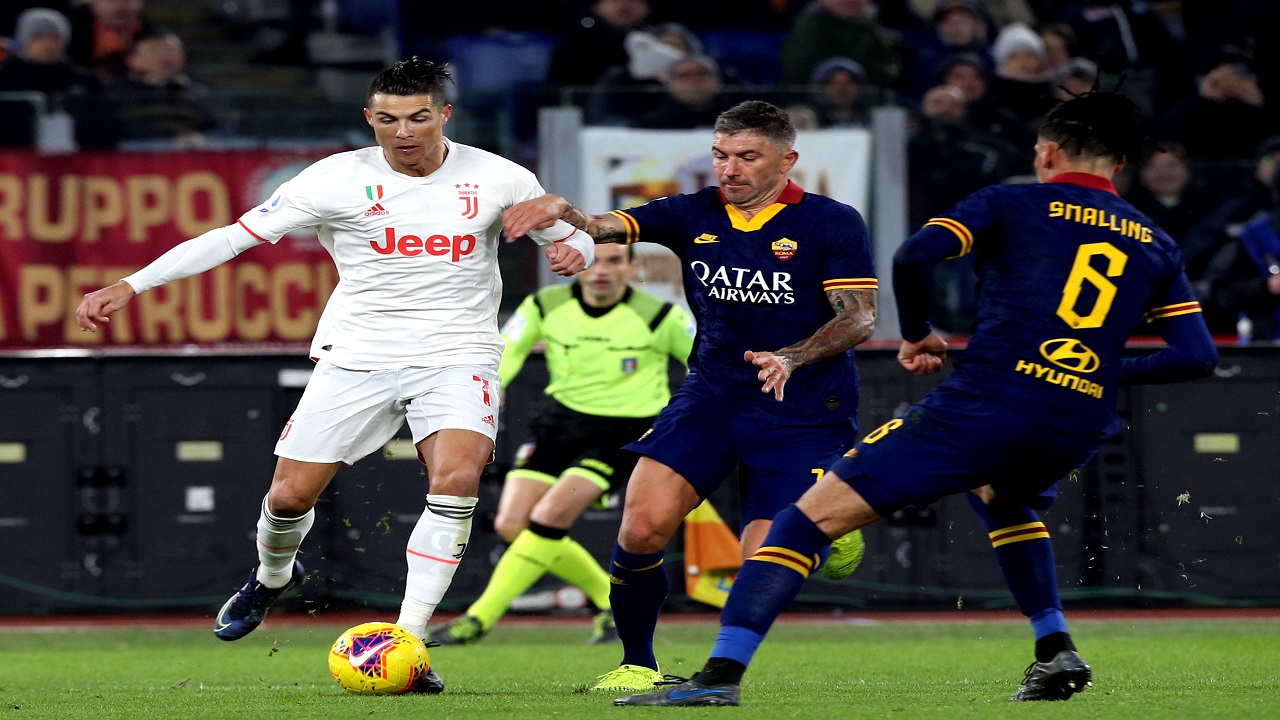 Roma had their chances with Edin Dzeko hitting the post and Wojciech Szczesny denying Cengiz Under from point-blank range. (Image credit: Getty Images)

"We are starting to break away from the quicksand of the relegation zone, but it's still there and we have to keep going," said coach Claudio Ranieri, who next play title-chasing Lazio. Jhon Chancellor nodded in after 12 minutes for Brescia. But Karol Linetty volleyed in the equaliser on 34 minutes and provided the cross for Jakub Jankto to put the hosts ahead just before the break.

Last season's top scorer Quagliarella gave Sampdoria a third from the spot for his first home goal this season, and added a second in injury time. In Florence, Patrick Cutrone got his first start for Fiorentina since his move from Wolverhampton Wanderers this week, playing the final 15 minutes in the tight win over rock-bottom SPAL.

German Pezzella struck eight minutes from time to give new coach Giuseppe Iachini his first win for 14th-placed Fiorentina who are now seven points above the drop zone. Udinese beat Sassuolo 3-0 for their third consecutive victory to move level on points with last season's runners-up Napoli who are in 11th position.