The Netherlands, Germany And World Cup Finalists Croatia Expanded A List Of Big Hitters To Qualify For Euro 2020 On Saturday As The Trio Booked Their Places At Next Summer's Finals.

The Netherlands, Germany and World Cup finalists Croatia expanded a list of big hitters to qualify for Euro 2020 on Saturday as the trio booked their places at next summer's finals. Austria also made it through to the multi-host tournament, which kicks off in Rome on June 12, with 16 sides now ensured of a spot at the 24-team event and only four places remaining from the main qualifying route. They join other big names such like world champions France, Spain, Italy and England, with European champions Portugal one win away from qualification. Ronald Koeman's resurgent Dutch needed a point to qualify for their first major tournament since coming third at the 2014 World Cup and got what they needed in a scrappy goalless draw with Northern Ireland in Belfast.

"It means a lot for us as players. Hopefully it means so much to the Dutch people," Liverpool defender Van Dijk said. However they were far from the flamboyant outfit that has so often thrilled in Group C, and survived a huge scare when Steven Davis smashed a first-half penalty high over the bar. The Dutch dominated possession and stopped the hosts from having a single shot on target but failed to create much themselves. Davis' spot-kick blunder left Michael O'Neill's side third and hoping for a way into the tournament via the playoffs.

The draw allowed fierce rivals Germany to move top in the group as Toni Kroos hit a brace in a simple 4-0 win over Belarus in Moenchengladbach which saw them qualify for the Euros for the 13th time in a row. A deft back-heeled goal from defender Matthias Ginter just before the break and impressive finishing by Leon Goretzka and Kroos gave the Germans a comfortable three-goal lead early in the second half. Captain Manuel Neuer produced a superb save to keep out Belarus striker Igor Stasevich's penalty before Kroos dribbled through the defence to claim his second goal seven minutes from time and make sure of a routine win.

"Overall we did well, but at the moment I don't include us among the favourites for the European title," said Kroos, echoing coach Joachim Loew's comments from earlier in the week. A win over Northern Ireland in Frankfurt on Tuesday will guarantee Loew's new-look side first place. Croatia survived a scare to secure their place in the Euros after coming from behind beat Slovakia 3-1 in Rijeka. The World Cup runners up needed just a point to ensure qualification from Group E but Robert Bozenik stunned the home crowd when he tapped the away side ahead in the 32nd minute. However it was one-way traffic in the second half and Croatia's qualification was never in doubt once Nikola Vlasic drilled home the leveller. 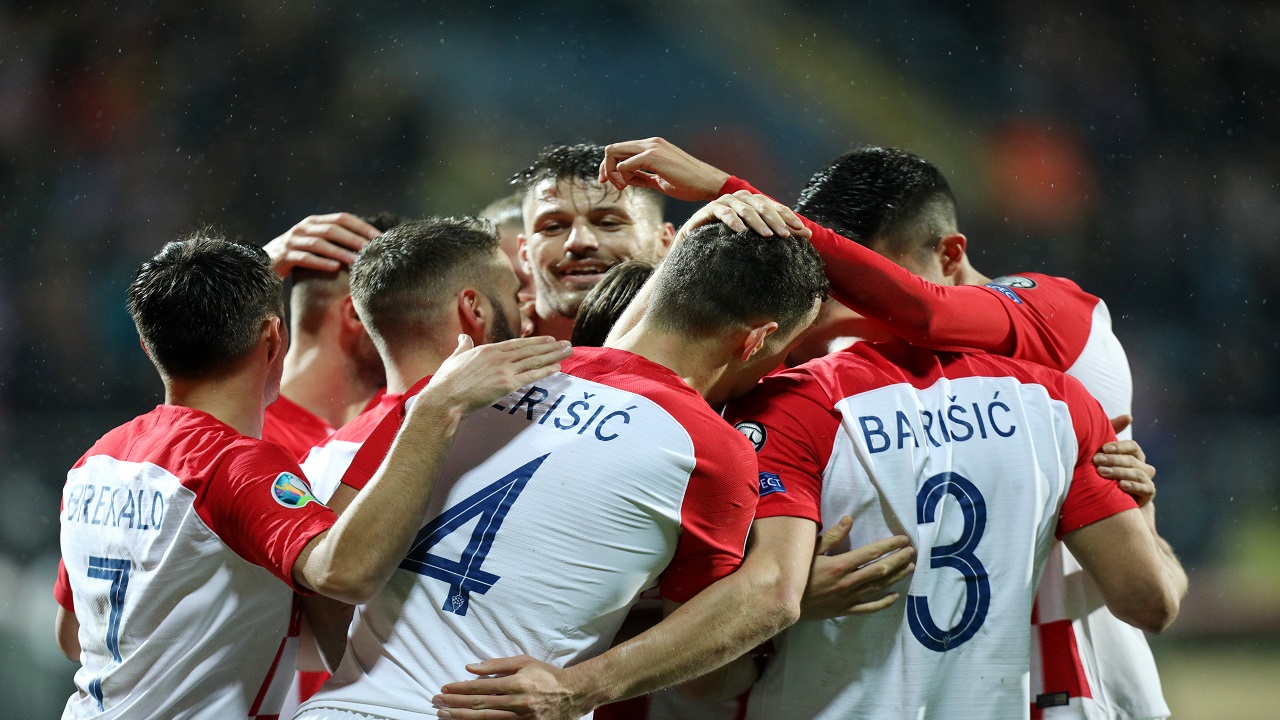 Croatia survived a scare to secure their place in the Euros after coming from behind beat Slovakia 3-1 in Rijeka with the World Cup runners up needed just a point to ensure qualification from Group E (Image credit: Getty Images)

Bruno Petkovic headed the hosts in front and Ivan Perisic sealed the three points with a thumping finish with 16 minutes left. "We were trying to stay calm in the dressing room at half-time, we were sure that our quality would prevail. We kept attacking, creating chances, and the goals came," said Petkovic.

That win gives Wales a fighting chance of qualifying after their 2-0 victory over Azerbaijan earlier on Saturday. Ryan Giggs' side stay third thanks to first-half headed goals from Kieffer Moore and Harry Wilson and Slovakia losing against the Croats.

They are just one point behind second-placed Hungary, who travel to Cardiff on the final day for a winner-takes-all clash. "It's massive for us to get the three points and now we go again Tuesday," said Moore. "We came here for the three points and we got them -- now it's all guns blazing towards Tuesday." Austria booked their place with a 2-1 win over North Macedonia that kept third-placed Slovenia at bay despite their 1-0 triumph over Latvia. They are second in Group G behind Poland, who had already qualified going into this round of games but maintained a three-point lead at the top of the group thanks to a 2-1 win at Israel.

In Saint Petersburg, the Hazard brothers made short work of Russia as already-qualified Belgium maintained their 100 percent record with a 4-1 win that secured them top spot in Group I. Eden and Thorgan Hazard put Roberto Martinez's side three goals ahead at the break before in-form Inter Milan striker Romelu Lukaku crashed home the fourth in the 72nd minute to make absolutely sure of the result.