Lionel Messi Scored Four Goals And Barcelona's 5-0 Rout, Coupled With Real Madrid's Defeat, Means They Move Back To The Summit Of La Liga Two Points Ahead Of Zinedine Zidane's Side Ahead Of Next Saturday's Showdown At The Santiago Bernabeu.

Lionel Messi, meanwhile, ridiculed talk of a drought by scoring four goals against Eibar after four games without one. (Photo Credit: Getty Images)

Lionel Messi scored four goals and Barcelona reclaimed top spot in La Liga as Real Madrid suffered a surprise defeat by Levante on Saturday, a week before the Clasico. Real Madrid's nightmare afternoon was made worse by another injury to Eden Hazard, who was forced off in the second half of their 1-0 defeat in Valencia and is now doubtful to face Manchester City on Wednesday in the Champions League. "It doesn't look good," said Real coach Zinedine Zidane afterwards. Lionel Messi, meanwhile, ridiculed talk of a drought by scoring four goals against Eibar after four games without one, while emergency signing Martin Braithwaite made two assists off the bench, teeing up Messi and then Arthur Melo in injury-time.

Their 5-0 rout, coupled with Madrid's defeat, means Barca move back to the summit of La Liga, two points ahead of Zidane's side ahead of next Saturday's showdown at the Santiago Bernabeu. "We've had good times this season and now this is a bad time," said Zidane. "Now we have a week where everything is at stake." It amounts to a considerable shift in momentum, with Barcelona away at Napoli in the first leg of the Champions League last 16 on Tuesday.

Madrid host City a day later and the plan had been for Hazard to regain form and fitness in what was only his second start since returning from three months out with a broken right foot. But the Belgian sat in the dug-out with an ice pack around the same foot after going off and Zidane suggested it was a repeat injury after the match. "It can be weak where you've had an injury," he said. "It's sore now but we will see tomorrow after more tests."

Madrid were shaken by Hazard's departure and Levante capitalised as Jose Luis Morales banged a shot into the top corner from the angle, even if Thibaut Courtois pulled out of a save he should have made. For Madrid, playing catch-up again next weekend will be a particularly heavy psychological blow, especially given the series of off-field problems engulfing Barcelona in recent weeks. Yet on the pitch, Messi showed no sign of distraction as the 32-year-old completed the second fastest of his now 36 league hat-tricks, after less than 40 minutes at Camp Nou. "There's nothing left to do but stand up and applaud," Eibar wrote on Twitter afterwards. "I won't wash my kit after hugging Messi," said Braithwaite.

Braithwaite's arrival from Leganes drew criticism after Barcelona capitalised on a curious La Liga rule that allows clubs to sign outside of the transfer window if they have lost a player to serious injury. Leganes, without their top scorer, were beaten earlier by fellow strugglers Celta Vigo but Braithwaite made the perfect start with his new team.

Messi quickly got to work, scoring a brilliant first goal in the 14th minute after collecting the ball centrally, around 30 yards out. He had three Eibar defenders in front of him but found a way through, nutmegging Anaitz Arbilla before chipping delicately into the corner. The second came in the 37th minute as Sergio Busquets found Arturo Vidal, who feathered a flick into Messi's path. Messi surged forward, past his stumbling opponents, and fired in. His third, three minutes later, was the simplest of the trio and arrived only after he tried to play in Antoine Griezmann. 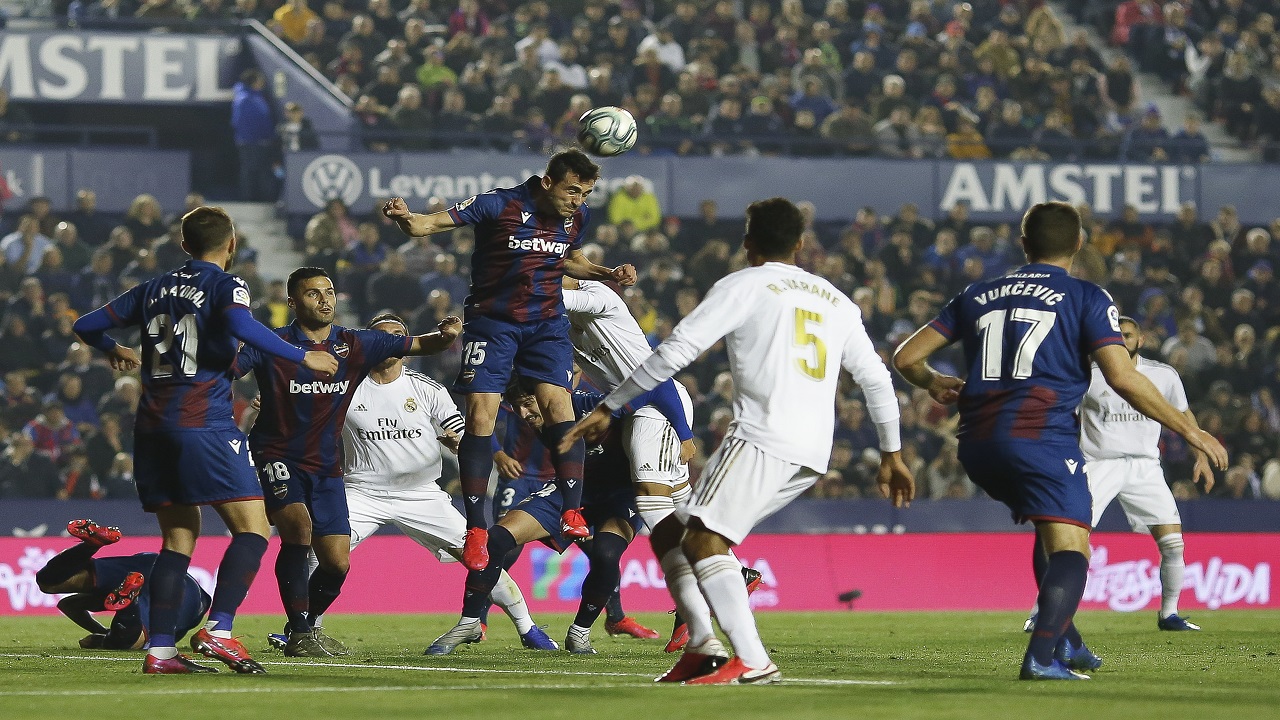 Real Madrid were hampered by the loss of Eden Hazard as they lost to Levante. (Image credit: Getty Images)

His generosity was rewarded as a sloppy Griezmann touch meant the ball cannoned back to Messi, who apologetically poked in. Coach Quique Setien was able to take Griezmann off with 18 minutes left and introduce Braithwaite for his debut. Braithwaite's first contribution was a skewed cross but things improved immeasurably from there, as two passes across goal gave Messi his fourth and Arthur his first.

Madrid were never in control of a chaotic contest against Levante but might have taken the lead if Hazard had done better with a long ball over the top from Marcelo, which he failed to control and then scuffed into the hands of Aitor Fernandez. He limped off and Madrid lost their way, finally punished with 11 minutes left by a straight ball through to Morales.

Luka Modric, exposed on the right side of Madrid's defence, was unable to recover and Morales caught Courtois by surprise by firing early past the goalkeeper and into the top corner. Real Sociedad moved into fourth and above Atletico Madrid with a 3-0 victory over Valencia, whose miserable form continued following their 4-1 Champions League loss at Atalanta in midweek.