Liverpool's Setbacks Of Late Have Come Away From Anfield And They Set An English Top-flight Record For 22 Consecutive Home League Wins As Two Quickfire Goals From Mohamed Salah And Sadio Mane Turned The Game Around.

Liverpool had suffered three defeats in four games in all competitions, including their first in the Premier League for 45 matches at Watford last weekend. (Photo Credit: Getty Images)

Liverpool moved to within nine points of claiming the Premier League title by coming from behind to beat Bournemouth 2-1 as Tottenham and Wolves missed the chance to put pressure on Chelsea for a top-four finish. Sheffield United were the big winners in the race for a place in the Champions League next season with a 1-0 win over Norwich to move up to sixth, while Arsenal moved to within five points of the top four by beating West Ham 1-0. Liverpool had suffered three defeats in four games in all competitions, including their first in the Premier League for 45 matches at Watford last weekend.

Callum Wilson's controversial early opener threatened another major upset. But all of Liverpool's setbacks of late have come away from Anfield and they set an English top-flight record for 22 consecutive home league wins as two quickfire goals from Mohamed Salah and Sadio Mane turned the game around. The runaway league leaders still needed a miraculous goal-line clearance from James Milner to deny Ryan Fraser an equaliser, but defeat keeps Bournemouth marooned in the bottom three. "There's nothing good in losing football games but it makes you aware of how special it is to win football games. That's what we had in the last 10 days or two weeks when we lost games," said Liverpool manager Jurgen Klopp. "I was absolutely happy about the result, the three points and the performance because I knew it would be tricky for different reasons."

The spread of the coronavirus could have a big impact on the Reds' title celebrations in the weeks to come with the possibility of games being played behind closed doors. But the abandonment of the normal pre-match ritual of handshakes was the only disruption to the Premier League calendar this weekend. Despite the coronavirus risk there was no halt to players celebrating wildly with each other and Arsenal players piled on top of Alexandre Lacazette after a long VAR review of the Frenchman's winner at the Emirates. Mesut Ozil was originally flagged offside as he latched onto Pierre-Emerick Aubameyang's deflected shot and headed down for Lacazette to sweep home. 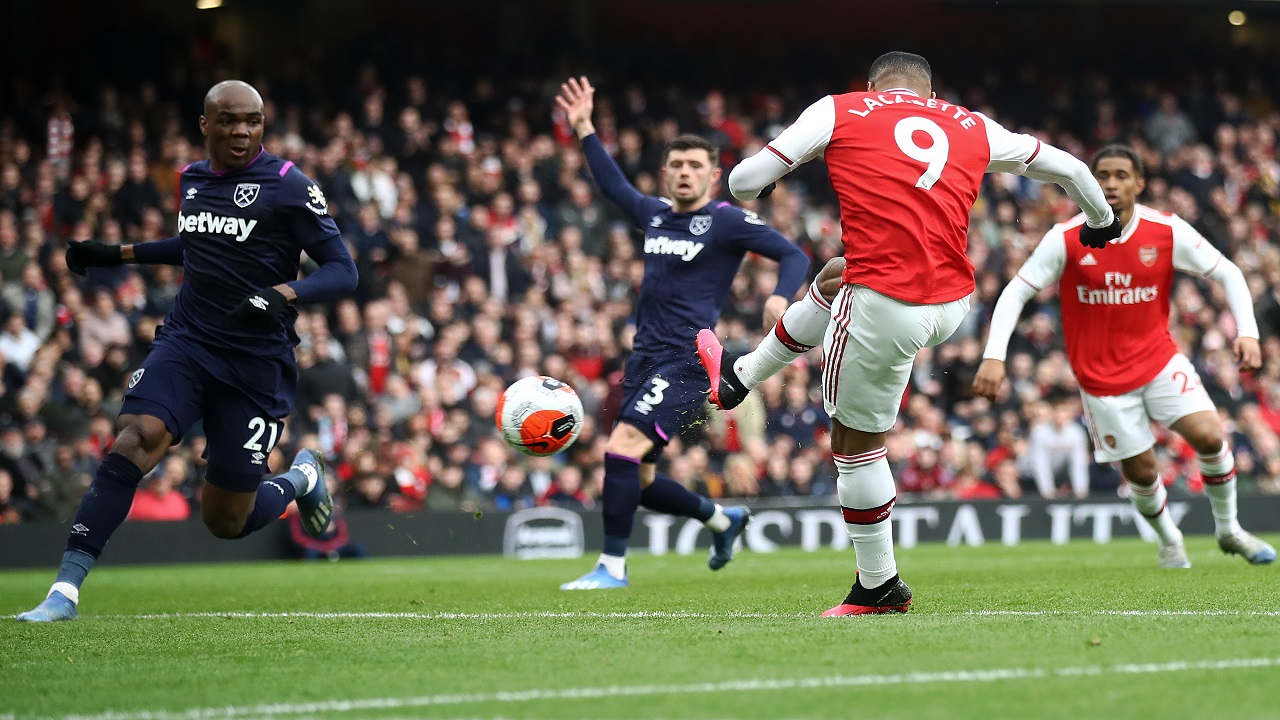 But the goal was finally given after a delay of several minutes to move Arsenal to within five points of the top four. "They deserved more because of the chances they created. This is football, sometimes you don't get what you deserve," said Lacazette. Spurs halted a run of four straight defeats in all competitions with a 1-1 draw at Burnley to stay a point ahead of their north London rivals despite Jose Mourinho following through on his threat to rest players ahead of Tuesday's trip to Leipzig in the Champions League.

Tottenham got off to the worst possible start at Turf Moor when Chris Wood bundled home after Hugo Lloris spilled Jay Rodriguez's shot. However, Mourinho introduced Giovani lo Celso and Lucas Moura at the break with club record Tanguy Ndombele hooked. The visitors got an immediate reward when Dele Alli stroked home from the penalty spot after Ben Mee chopped down Erik Lamela and Mourinho was scathing of Ndombele's contribution.

"He is a player with a great talent and he has to know that he has to do much better," said Mourinho. "I cannot keep giving him opportunities to play." Wolves missed the chance to move into the top four as a disappointing 0-0 draw at home to Brighton left them still two points adrift of Chelsea in fifth. Sheffield United moved above Manchester United and Tottenham to further their dreams of Champions League football next season thanks to captain Billy Sharp's winner to beat bottom-of-the-table Norwich 1-0.

"The wheels haven't fallen off again today," said Blades boss Chris Wilder. "They show no signs of (doing so) at the moment." Roy Hodgson celebrated his new contract as Crystal Palace boss with a 1-0 win over Watford as the Eagles moved into the top half of the table. Newcastle also secured the win that should guarantee their survival courtesy of Allan Saint-Maximin's strike to beat 10-man Southampton 1-0.