Kevin De Bruyne Kept His Cool To Beat Belgium Team Mate Thibaut Courtois From The Penalty Spot In The 82nd Minute To Give City The Lead After Gabriel Jesus Had Headed Home A Cross To Help Manchester City To A Crucial Win.

Manchester City finally produced a Champions League performance worthy of their status as one of European football's elite clubs by beating Real Madrid 2-1 away in Wednesday's last-16 first leg after pulling off a stunning late fightback. Kevin De Bruyne kept his cool to beat Belgium team mate Thibaut Courtois from the penalty spot in the 82nd minute to give Manchester City the lead after Gabriel Jesus had headed home a cross from De Bruyne to pull Manchester City level in the 78th minute. Isco had given Real the lead on the hour mark following a sweeping counterattack but the 13-times European champions' night soon unravelled, culminating in captain Sergio Ramos being sent off for hauling down Jesus in a bid to prevent a third City goal.

Manchester City coach Pep Guardiola, who has not gone past the quarter-final in his three previous seasons with the club, was delighted with how his side turned the match around but also said the tie was still wide open. "Winning in the Bernabeu gives us great satisfaction, it's incredible for us and not something this club is used to. I'm very pleased with the result and the performance, we showed great personality," he said before sounding a note of caution. If there is one club who was capable of turning a tie around it is Real Madrid, they have the history and experience in this competition to do it."

Ramos will be suspended for the second leg at the Etihad Stadium on March 17 while City's influential defender Aymeric Laporte was forced off injured in the first half, another setback in a season marked by fitness troubles. City went into the match with a two-year ban from European competition hanging around their necks for defying UEFA's rules on financial fair play although the club submitted an appeal against the sanction earlier this week.

The visiting supporters chanted against Europe's organising body throughout the game and after they had completed their comeback the sanction had become a badge of pride for the gleeful fans. Guardiola opted to leave his top scorers Raheem Sterling and Sergio Aguero out of the starting lineup despite them getting a combined 40 goals in all competitions this season. Yet he turned to Sterling in the second half and the England forward earned the penalty from which De Bruyne snatched the winner, drawing a foul from Real's Dani Carvajal. Brazil striker Jesus led City's line from the start and had their two best chances in the first half, first drawing a save from Madrid keeper Courtois then seeing a shot hurriedly scuffed off the line by three Real players right before halftime. 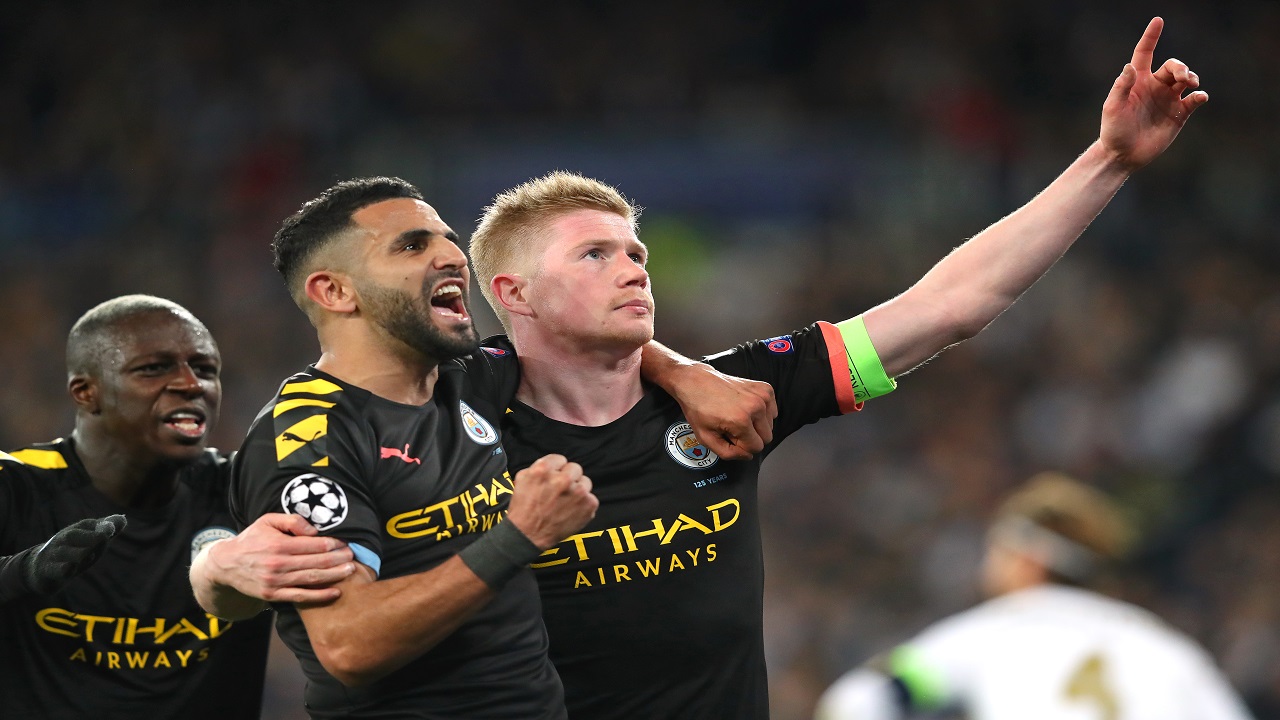 Manchester City, whose only European trophy came in the 1970 Cup Winners' Cup, who had the last laugh vs Real Madrid. (Image credit: Getty Images)

Real's best chance of the first half came when Karim Benzema had a header saved by Ederson and the ball fell to Vinicius Jr. but the teenager fell over just as he was shaping to shoot into the unguarded net. The Brazilian was not fazed by the miss, though, and played a crucial part in breaking the deadlock by chasing down Fernandinho and laying on the pass for Isco to score.

Real's fans felt they were on the familiar path to victory in their favourite competition and began to sing 'We are the Kings of Europe', but it was City, whose only European trophy came in the 1970 Cup Winners' Cup, who had the last laugh. "There's no explanation for what happened, we had 75 spectacular minutes and in the last 15 minutes we didn't do what we needed to do, we lacked intensity and control and they had two attacks and scored twice," said Real's Casemiro. "But the tie is not over, if there is a team that is capable of a comeback it is Real Madrid."