Despite Failing To Add To Their Tally, Manchester City Maintained Hopes Of A Cup Treble After Lifting A Third Consecutive League Cup On Sunday And Beating Real Madrid 2-1 In The First Leg Of Their Champions League Last 16 Tie.

Manchester City won their 20th consecutive domestic cup tie to move into the quarterfinal of the FA Cup with a 1-0 win against Sheffield Wednesday. (Photo Credit: Getty Images)

Manchester City won a 20th consecutive domestic cup tie to move into the quarter-finals of the FA Cup with a 1-0 win at Sheffield Wednesday as Tottenham crashed out on penalties to Norwich. Sergio Aguero scored the only goal for the holders eight minutes into the second half as Wednesday goalkeeper Joe Wildsmith failed to get a strong enough hand to the Argentine's low strike. A solitary goal was scant reward for the dominance of Pep Guardiola's Manchester City as the Catalan was rewarded for naming a strong line-up against the Championship side. Riyad Mahrez and Gabriel Jesus missed glorious first half chances, while Nicolas Otamendi and Benjamin Mendy hit the woodwork before Aguero finally made the breakthrough.

Despite failing to add to their tally, Manchester City maintained hopes of a cup treble after lifting a third consecutive League Cup on Sunday and beating Real Madrid 2-1 in the first leg of their Champions League last 16 tie. "He is a good manager and crazy," said Aguero of Guardiola's relentless demand to keep winning. City will travel to Newcastle in the quarter-finals. Norwich will host Derby or Manchester United in their first quarter-final since 1992 after seeing off Spurs 3-2 on penalties after a 1-1 draw.

A bad night for Tottenham, who have now lost their last four games in all competitions, was compounded when midfielder Eric Dier climbed into the stands to confront supporters who had allegedly insulted members of his family. "I think Eric did what we as professionals cannot do but when someone insults you and your family is involved, especially your younger brother," said Spurs boss Jose Mourinho. "This person insulted Eric, the younger brother was not happy with the situation and Eric was not happy. But we as professionals cannot do what he did."

Jan Vertonghen headed Tottenham into an early lead, but Mourinho's decision to hand 36-year-old goalkeeper Michel Vorm his first appearance of the season backfired. The Dutchman spilled a long-range effort from Kenny McLean and Josip Drmic bundled home the rebound to level. Both sides then tired badly in extra-time, but neither could find a winner and saves from Tim Krul to deny Troy Parrott and Gedson Fernandes allied to Erik Lamela's wild attempt that flew over the bar saw another shot at a trophy for Spurs slip by. Mourinho again blamed the absence of key personnel such as Harry Kane and Son Heung-min to injury for defeat. 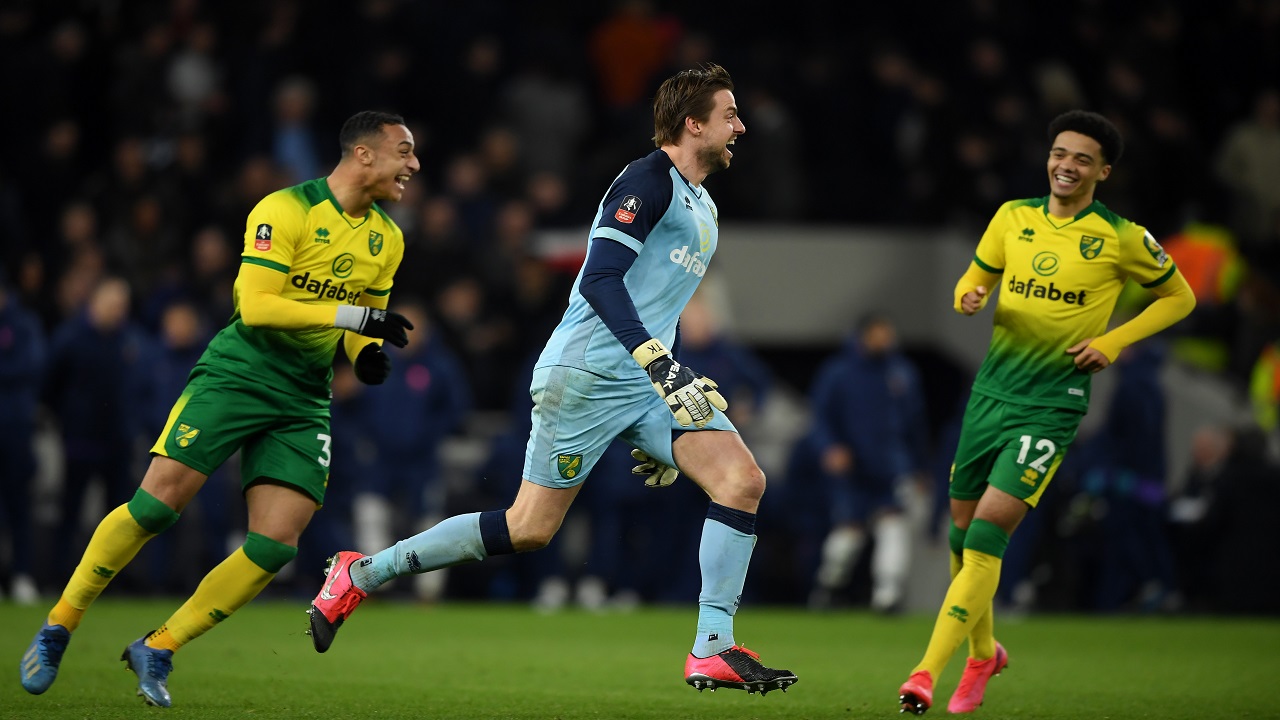 Tottenham Hotspur lost 3-2 on penalties after a 1-1 draw against Norwich and could face Manchester United. (Image credit: Getty Images)

"Some of my players were really in trouble and they made an incredible effort to try," said Mourinho. "I don't have one single negative feeling towards my players. I can cope with negative moments in football, but I feel really sorry for my players." Leicester also booked their place in the last eight with a much-needed 1-0 win over Birmingham thanks to Ricardo Pereira's late header. The Foxes have won just one of their last seven Premier League games to stall their charge towards the Champions League next season.

Brendan Rodgers' men were again without Jamie Vardy through injury and needed right-back Ricardo to get the only goal when he headed home Marc Albrighton's cross eight minutes from time. "I thought it was just a matter of time," said Rodgers, whose side will host Chelsea in the quarter-finals. "In the second half we dominated -- lots of quick combos and the goal was coming. It was an excellent display." Sheffield United will host Arsenal in the other quarter-final tie.