Pep Guardiola Has Led Manchester City To Two Premier League Titles, Three League Cups, An FA Cup And Two Community Shields While The Only Blemish During His Reign Has Been Manchester City's Lack Of Success In Europe.

Pep Guardiola said his Manchester City players were hungry for silverware before Sunday's League Cup final and they duly gobbled up an eighth trophy of his reign to prove themselves the insatiable gluttons of English football. Manchester City secured a third straight League Cup and fifth in the last seven seasons with a 2-1 victory over Aston Villa at Wembley when they did enough to suppress battling opponents who did well to stay in the contest in a one-sided first half. The result, however, had an air of inevitability about it as soon as Manchester City took a 2-0 lead, with goals from Sergio Aguero and Spaniard Rodri after half an hour, and not just because they were bossing the encounter. Manchester City rarely lose cup finals and have never done so with Guardiola at the helm.

In fact, they have a remarkable record of success in almost every domestic competition over the last three seasons. Following a barren first season in charge, Guardiola has led City to two Premier League titles, three League Cups, an FA Cup and two Community Shields. The only blemish during Guardiola's reign has been City's lack of success in Europe.

"We won eight titles since we played our first final here against Arsenal (in the 2017-2018 League Cup). We were in 11 competitions and we won eight. Every game we try to win and give the best we can give to our club. Eight out of 11 is quite remarkable."

City Still On Course For Treble

This season City could win the treble, with the FA Cup and Champions League still available, but Guardiola's absurdly high standards mean that it will not be considered a success in his mind because they will almost certainly miss out on the Premier League title. They trail league leaders Liverpool by 22 points heading into the final stretch. 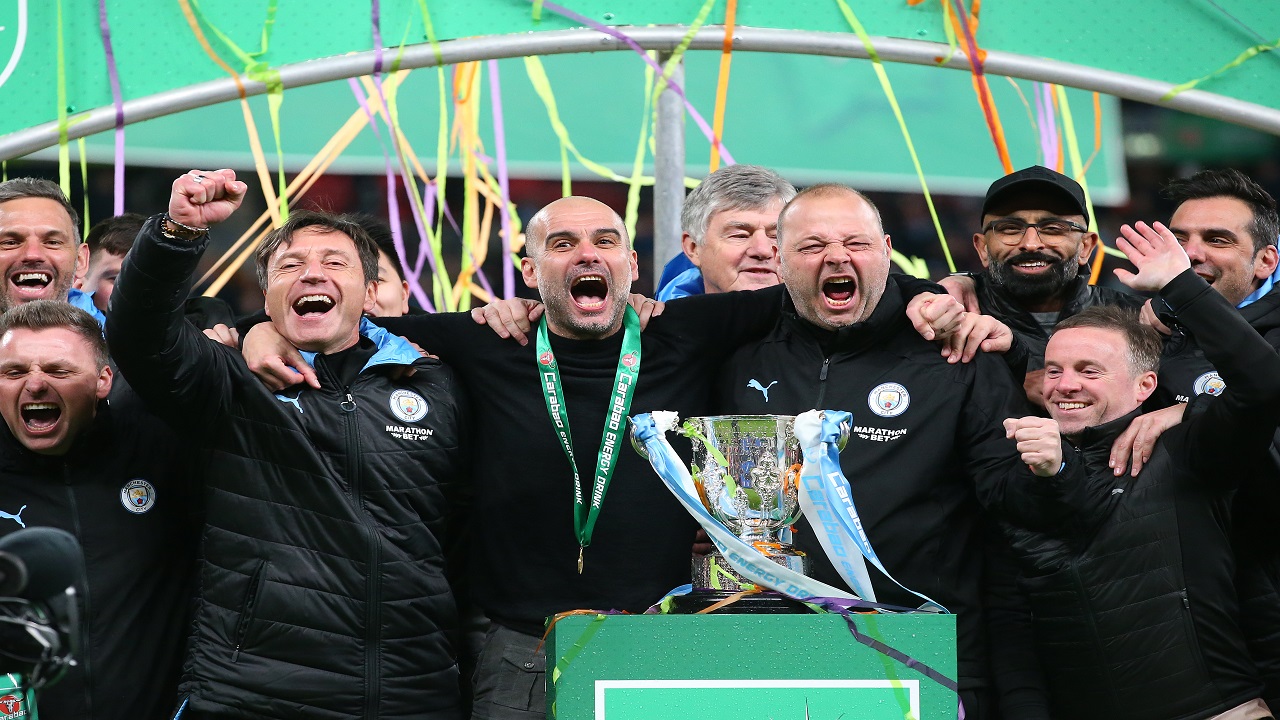 "The most beautiful trophy is the Premier League and that is not going to happen, because we weren't consistent enough," he told reporters at Wembley. He did, however, have words of praise for two of his players in midfielder Phil Foden and keeper Claudio Bravo. Foden was a dynamic presence in midfield and set up the first goal for Aguero while Bravo pulled off a superb save at the death to avoid extra time.

"Every time in training he is incredible, always ready, I knew we could count on him," said Guardiola. "I think with Phil every game he plays, he is winning experience for his mind and his body and be clear. I never doubted he can do it." He was equally effusive in his praise of Bravo. "He is one of most incredible payers I have seen. Hopefully other players can learn from him. What he is going to do in his life as manager or sports director, will have success."