Manchester City Booked Their Place In A Third Successive League Cup Final, But Made Hard Work Of Disposing Of Manchester United 3-2 On Aggregate After Losing The Second Leg Of Their Semi-final 1-0 At Home.

Manchester United won 1-0 but they fell short against Manchester City as they lost 3-2 on aggregate. (Photo Credit: Getty Images)

Manchester City booked their place in a third successive League Cup final, but made hard work of disposing of Manchester United 3-2 on aggregate after losing the second leg of their semi-final 1-0 at home. City enjoyed the vast majority of the chances on Wednesday but could not find a way past the inspired David de Gea and went behind to United's first attempt on goal 10 minutes before half-time when Nemanja Matic fired home. However, United's hopes of completing a miraculous comeback were extinguished when Matic was then sent-off 15 minutes from time and City held on to face Aston Villa at Wembley on March 1.

United had a mountain to climb after losing the first leg 3-1 at home three weeks ago and were without top scorer Marcus Rashford, who played a big part in the Red Devils' victory when they last visited the Etihad in December. City started like they did in racing into a 3-0 lead within 38 minutes at Old Trafford as they swarmed all over the visitors, who had De Gea to thank for keeping them in the tie. Sergio Aguero was first to threaten with a diving header that the Spaniard parried to safety before using his legs to repel Riyad Mahrez's effort. Bernardo Silva flashed a shot across goal before more De Gea acrobatics denied Aguero again at his near post. 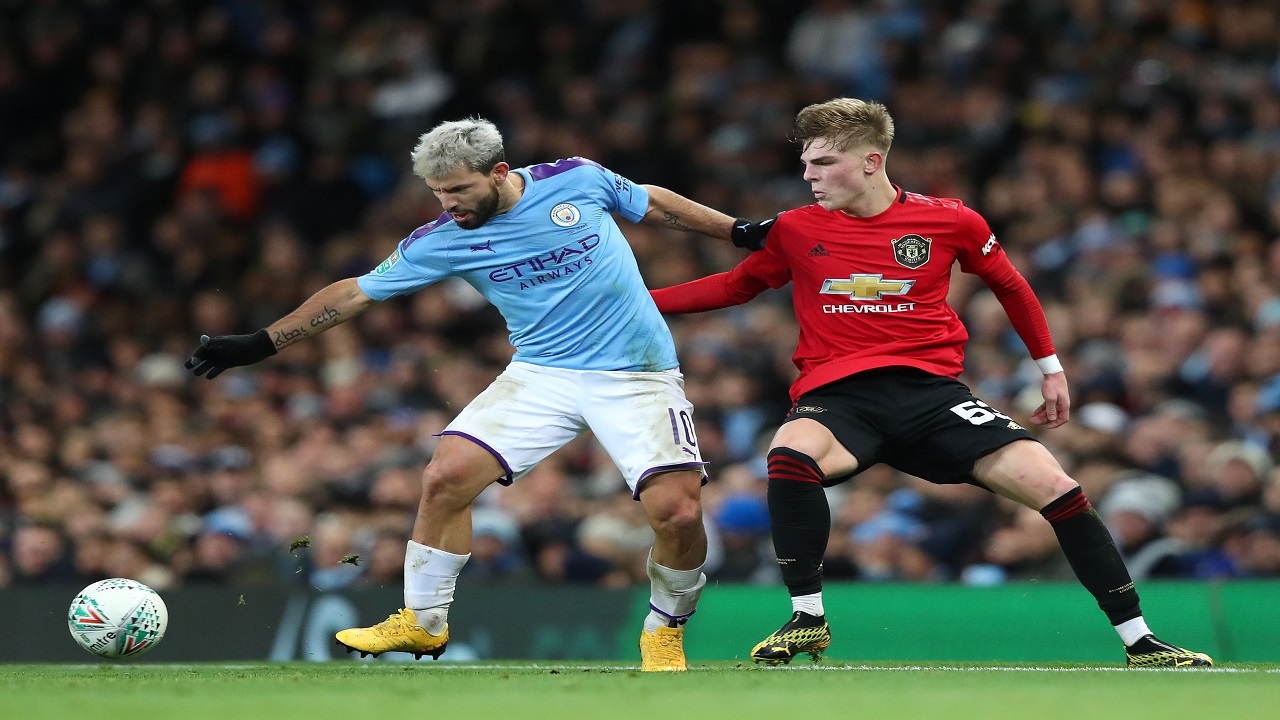 The tension among the home support was eased when Matic finally paid for persistent fouling. (Image credit: Getty Images)

United had not even mustered a shot in anger for the first 35 minutes, but suddenly the tie was back in the balance when Matic connected sweetly from the edge of the box after City failed to clear a free-kick into the box. The hosts did have the ball in the net before half-time when Raheem Sterling finished off a flowing team move, but the England international was denied his first ever goal against United by an offside flag.

Sterling contrived to miss another glorious chance to kill the tie off just before the hour mark as he rounded De Gea but blasted over with just defenders on the line to beat. Guardiola then could not believe his eyes when David Silva tried to tee up Ilkay Gundogan rather than shoot with just De Gea to beat after Harry Maguire was caught in possession. The tension among the home support was eased when Matic finally paid for persistent fouling when he chopped down Bernardo Silva to cut short a City counter-attack.

Aguero finally beat De Gea with a deft finish only to also be flagged offside as United salvaged some pride, if not their chances of a first trophy since 2017. United executive vice-chairman Ed Woodward has not been present at recent games as animosity towards his part in the club's declining fortunes on the field has grown. However, Woodward was in attendance at the Etihad just a day after a hooded mob attacked his home with flares and graffiti.