Poland And Russia Secured Their Places At Euro 2020 On Sunday With Victories Over North Macedonia And Cyprus Respectively, While Germany And The Netherlands Boosted Their Hopes Of Reaching The Finals.

Stanislav Cherchesov's Russia, who reached the World Cup quarter-finals on home soil last year, only had to avoid defeat in Nicosia to follow Belgium in qualifying from Group I. (Photo Credit: Getty Images)

Poland and Russia secured their places at Euro 2020 on Sunday with victories over North Macedonia and Cyprus respectively, while Germany and the Netherlands boosted their hopes of reaching the finals. Russia eased to a 5-0 thrashing of 10-man Cyprus, with Poland joining them, Belgium and Italy in qualifying this week by seeing off North Macedonia 2-0. Stanislav Cherchesov's Russia, who reached the World Cup quarter-finals on home soil last year, only had to avoid defeat in Nicosia to follow Belgium in qualifying from Group I. Valencia winger Denis Cheryshev fired in a ninth-minute opener for the visitors, before Magomed Ozdoev, who scored a fabulous long-range strike on Thursday against Scotland, made it two midway through the first half.

Any thoughts of a Cyprus comeback were ended in just the 28th minute when Kostas Laifis was dismissed for a nasty lunge on Russian full-back Sergei Petrov. Striker Artem Dzyuba scored his third goal in two games in the 79th minute, before Aleksandr Golovin and Cheryshev's second completed the rout late on. Russia will attempt to overtake Belgium, who beat Kazakhstan 2-0 earlier on Sunday, at the summit when they host the world's number one side on November 16.

The European Championship finals, which start on June 12 next year, are being held at 12 different venues across the continent, including Saint Petersburg in Russia. Poland went into their game against North Macedonia knowing victory would punch their ticket for the Euros. They were forced to be patient by the visitors, who could qualify through the playoffs after winning their Nations League group if they fail to do so automatically.

But Przemyslaw Frankowski prodded home less than 60 seconds after coming on as a substitute in the 74th minute, before Akardiusz Milik made the points safe. Poland remain three points clear of Austria, who won 1-0 in Slovenia, at the top of Group G, with North Macedonia and Slovenia five points further adrift. 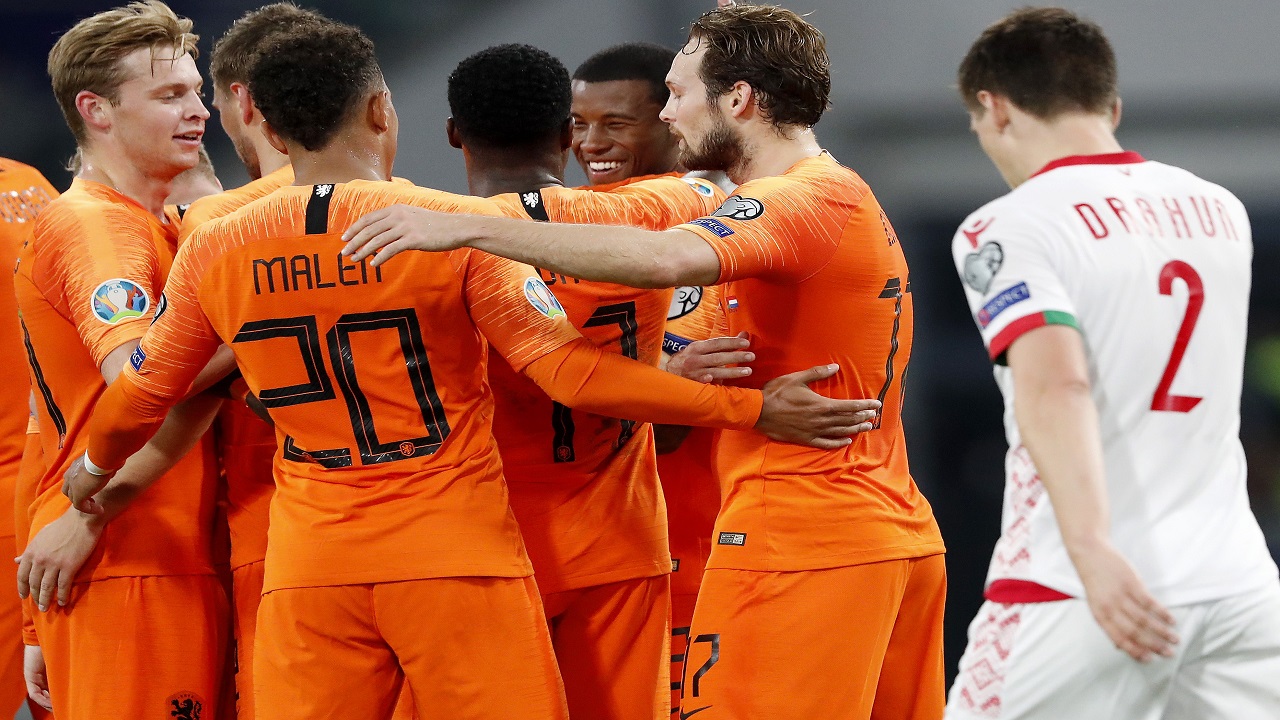 Netherlands defeated Belarus and remained at the top of Group C ahead of Germany on head-to-head record. (Image credit: Getty Images)

Ronald Koeman's Netherlands remained at the top of Group C ahead of Germany on head-to-head record with a nervy 2-1 win over Belarus in Minsk. The Dutch lead third-placed Northern Ireland by three points after beating Michael O'Neill's side 3-1 on Thursday. Georginio Wijnaldum headed the away team in front in the 32nd minute, shortly after Denis Laptev had spurned a golden chance to give Belarus a shock lead. The Liverpool midfielder doubled the advantage before the break with a wonderful 25-yard strike into the top corner, and although Stanislav Dragun gave Belarus hope early in the second half, the Netherlands held on with relative comfort. "We have to do better than we did in the second half, although in the end we had things under control," Dutch captain Virgil van Dijk told television channel NOS.

"We are now very close to qualifying for the finals, and ultimately that's what counts." Victory in Belfast over the Northern Irish next month would secure the Oranje a first appearance at a major tournament since finishing third at the 2014 World Cup. Germany eased to a 3-0 victory in Estonia despite seeing Emre Can sent off in the 14th minute. Ilkay Gundogan, who along with Can before kickoff 'unliked' a controversial Instagram post by Turkey forward Cenk Tosun, scored twice, with Timo Werner also finding the net. Joachim Loew's side host Northern Ireland in their final game, which could decide second place.

"We had to regroup after the red card, the team did well after the break, we did not concede and scored three goals," said Loew.

Croatia were made to wait to qualify, as Gareth Bale's strike in first-half injury time proved enough to grab a 1-1 draw for Wales in Cardiff. Nikola Vlasic fired a low ninth-minute shot in off the post to put Croatia on course for qualification, before Bale's fine goal secured Wales a point in a bad-tempered affair. Last year's World Cup runners-up Croatia will qualify if they avoid defeat against Slovakia in their final match on November 16, while Euro 2016 semi-finalists Wales could join them with two closing wins, as long as Slovakia do not beat the Croatians. "We've got to win both games and rely on others. But we're in it. I wanted to be in it after these games," Wales manager Ryan Giggs told Sky Sports.