Vinicius Junior's Deflected Finish And A Stoppage-time Goal From Mariano Diaz Decided A Frenzied Contest Against Barcelona At The Santiago Bernabeu, Where Madrid Found New Life After A Champions League Defeat By Manchester City Had Left Them On The Brink Of Crisis

Real Madrid found new life after a Champions League defeat by Manchester City had left them on the brink of crisis. (Photo Credit: Getty Images)

Real Madrid won the Clasico and might have saved their season as they ended their slump in the best way possible on Sunday by beating FC Barcelona 2-0 and returning to the top of La Liga. Vinicius Junior's deflected finish and a stoppage-time goal from Mariano Diaz decided a frenzied contest at the Santiago Bernabeu, where Real Madrid found new life after a Champions League defeat by Manchester City had left them on the brink of crisis. "It's been a tough week," said Real Madrid manager Zinedine Zidane. "We talked about how we had an opportunity this weekend and we took it."

Victory put them one point clear at the top of the table and shifts focus back to Quique Setien's Barcelona, who were outfought and, at times, outplayed. "The reality is we lost a lot of confidence with the ball," said Setien. "We entered a nervous spell and that's when the goal came." Lionel Messi's rasping shot was saved by Real goalkeeper Thibaut Courtois in the first half but it was the Argentine's opposing captain, Sergio Ramos, who was thrashing his arms in celebration after the final whistle. His reaction was an indication of the importance of this victory, not only for the effect it has on the standings but on the dynamic of the title race, which had seemed to be switching firmly in favour of Barca.

Cristiano Ronaldo, now of Juventus, was watching from an executive box and Madrid could have done with him during a period in which they had won only one of their last five games. Zidane said on Saturday this match would not decide who lifted the trophy in May but a Barca win and a five-point gap might well have been difficult to close. Yet from the start Barcelona seemed keener to kill the game than win it, playing for time in the hope of keeping the contest tight, when they might have been better off attacking their opponents' fragility.

"The Madrid we faced in the first half was one of the worst Madrids I have faced at the Bernabeu," said Gerard Pique. "I don't say it as a criticism, we also have our problems, but we've missed an opportunity." There was more tension than creativity in the early stages as Fede Valverde crashed into Arthur Melo before fellow Spain full-backs Dani Carvajal and Jordi Alba were both booked after a disagreement. Madrid had the better of the play and regularly broke at speed through Vinicius down the left but constantly they failed to make the final pass, with Isco once left with his head in his hands after Marcelo opted not to pull the ball back.

Barcelona's passing was slow and their lack of urgency obvious. At one point Messi bent to tie his bootlaces and re-spotted the ball before taking a corner. But the visitors also created chances as Antoine Griezmann drove over from Alba's cutback and then Madrid had Courtois to thank for two excellent saves. First, Arthur held off Toni Kroos to go clear but his finish was blocked by the foot of Courtois and then the Belgian palmed away Messi's shot after he had skipped in behind Madrid's defence. 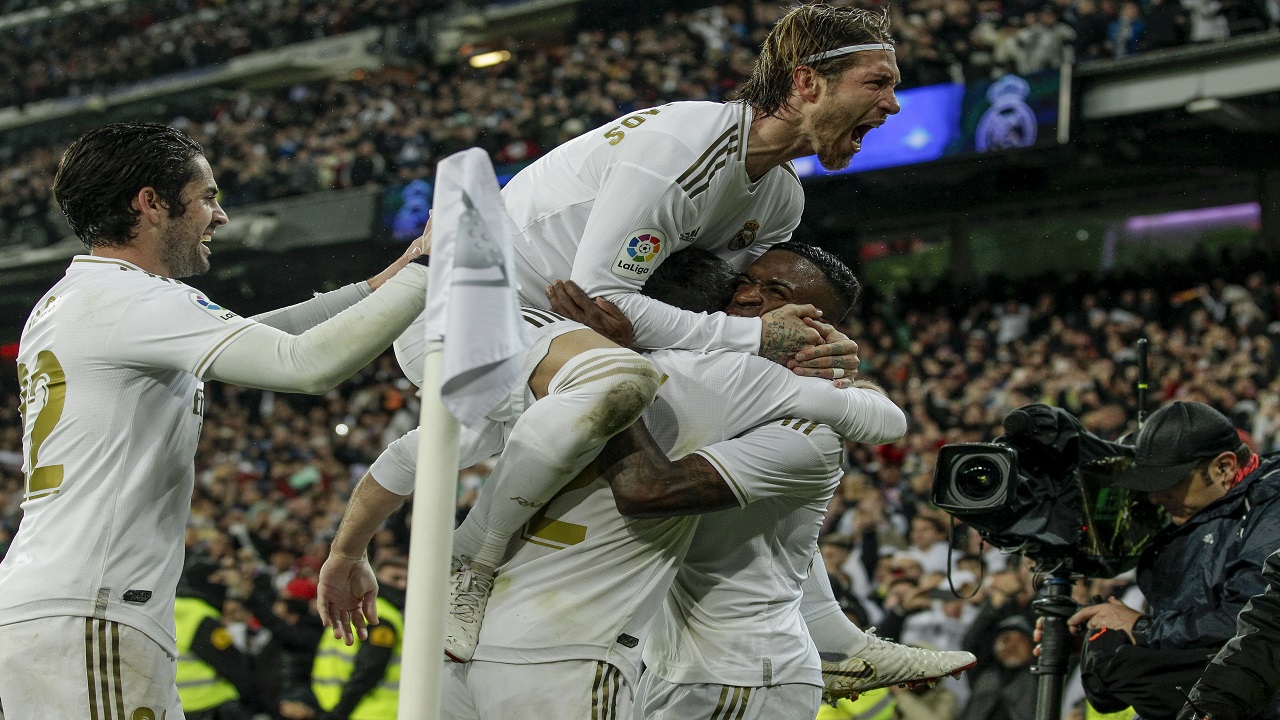 Real Madrid will be gunning to win the La Liga and also recover from the UEFA Champions League loss to Manchester City. (Image credit: Getty Images)

Ramos was lucky to get away with an error that allowed Nelson Semedo to break past him while Alba risked a second yellow when he checked Valverde but referee Mateu Lahoz was unmoved. Barcelona were sloppy after half-time and Madrid should have capitalised. Instead, Isco's header beat Marc-Andre ter Stegen but not Pique on the line and Karim Benzema volleyed over after a sloppy pass from Arturo Vidal. Vidal was replaced by Martin Braithwaite, Barca's emergency signing, and he sprinted in behind Marcelo twice in his first minute.

But Madrid remained in the ascendancy and in the 71st minute they took the lead. Benzema came short and pointed right to encourage Vinicius to run in behind. Kroos found him and Vinicius's shot deflected off the sliding Pique to beat Ter Stegen at his near post. The game opened up as Barcelona chased an equaliser. Marcelo celebrated when Messi's surge through was stopped by Raphael Varane. Pique headed Messi's cross over at the near post. Messi picked up a yellow card for a frustrated slide on Casemiro. In injury time, Ter Stegen ventured up for a late free-kick but it was Madrid that struck again. Mariano sped past Semedo and finished from the angle.