With Clusters Of Coronavirus Infections In The Lombardy And Veneto Regions, The Biggest Fixture Lost From The Serie A Program Was Juventus' Home Game Sunday Against Inter Milan In Turin, A Match Known As The Derby D'Italia, Or Italy's Derby

Juventus vs Inter Milan clash and the other four games affected were set to be played in a stadium with no fans to comply with the ban on sporting events imposed by the government. (Photo Credit: Reuters)

Amid a global health crisis, Italian soccer teams and Serie A's governing body are squabbling with each other about when to play games, with Inter Milan chief executive Giuseppe Marotta saying the season even runs the risk of being unable to finish. Five games scheduled in the top tier of the Italian league this weekend were postponed on Saturday in an attempt to contain the coronavirus outbreak. "The decision was down to me, but the clubs involved were contacted by telephone, so we know everyone's positions which were difficult to reconcile," Paolo Dal Pino, the president of governing body Lega Serie A, said on Sunday. "I invite everyone to think as Serie A, not as individual clubs."

Lega Serie A announced on Sunday that it has called an emergency assembly for Wednesday to "examine the consequences the governmental measures related to coronavirus have had on the fixture list." There have been 29 deaths from the COVID-19 illness in Italy and more than 1,100 people have tested positive, almost all in the country's north. With clusters of virus infections in the Lombardy and Veneto regions, the biggest fixture lost from the Serie A program was Juventus' home game Sunday against Inter Milan in Turin, a match known as the Derby d'Italia, or Italy's derby.

That match and the other four games affected were set to be played in a stadium with no fans to comply with the ban on sporting events imposed by the government. That ban is set to end in three of the six regions in which it has been imposed on Sunday at midnight, with Piedmont (which includes Turin) one of the three to have restrictions lifted. Marotta attacked the league's decision but Dal Pino said on Sunday that Inter had refused another option offered to the clubs.

"On Friday we proposed to Inter to move the match against Juventus to Monday night to be able to play it with fans present," Dal Pino said. "Inter categorically refused to go out onto the field, so it should assume its own responsibilities and not talk about sportsmanship or a falsified championship. Marotta represents the needs of Inter, I look after the general interests of all of Serie A, which unfortunately means daily conflicts of interests tied to each and every club. I have to promote Italian soccer and its image to the world, transmitting games in empty stadiums would have been a terrible calling card for the country."

The Derby d'Italia, which could also be a title-decider, is now due to be played May 13. It was the second straight week that Inter had seen a match postponed because of the new coronavirus. A new date for Sampdoria has yet to be scheduled, with Inter also still involved in the Italian Cup and the Europa League. Also, Thursday's Europa League match at San Siro was played without fans.

Inter fans protested outside the Serie A headquarters on Sunday, unveiling two banners. One read: "Shameful Lega. You should be ashamed of yourselves," with the Juventus logo inserted in place of two "i" letters in the original Italian. The second banner read: "Respect for football. Respect for fans." Marotta was asked in an interview by Italian newspaper Gazzetta dello Sport about the suggestion that Juventus pressure was behind the decision to postpone the match. 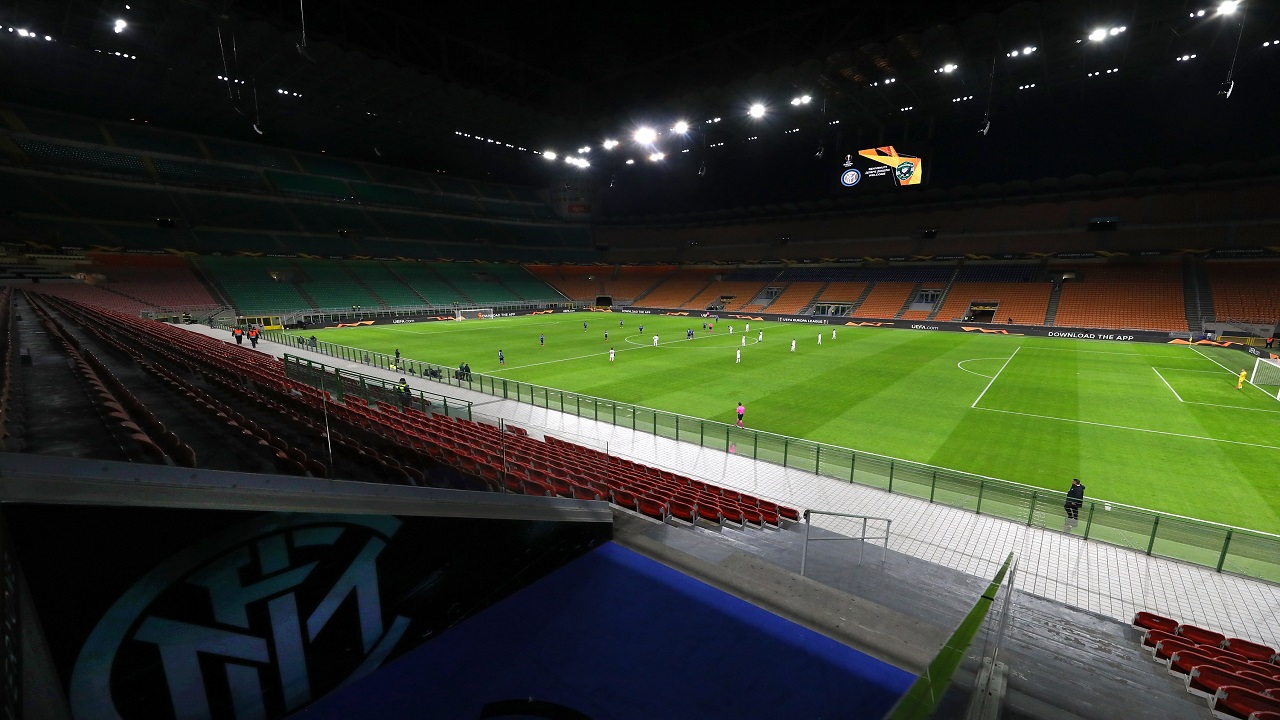 It was the second straight week that Inter had seen a match postponed because of the new coronavirus. (Image credit: Getty Images)

"I'm not very interested in that discussion," he said. "I say that the whole situation was dealt with badly. It should've been handled much quicker. The championship has been falsified. It's been unbalanced. Inter has been damaged, our fixture list for May is incredible. "What will happen from now on worries me ... it should have been the same for all teams this round, even postponing the whole round."

Marotta was also asked if there was the risk the season wouldn't be able to finish. "Yes," he said. "If more matches are called off then, yes." If Inter's match at Juventus had gone ahead in an empty stadium, it would have taken place at the same time on Sunday as the "clasico" between Real Madrid and Barcelona in Spain. "After the decisions that were made, there should not be even the shadow of suspicion of the uniformity of Serie A," Italy's sports minister Vincenzo Spadafora said on Sunday.

"We gave the Lega Serie A two options: postpone or play without fans. The Lega opted to postpone, also to avoid having the spectacle of empty stadiums. Now it's up to the Lega to sort this out, even taking apart the fixture list apart and putting it back together if needs be, to balance the calendar in the next few weeks. As minister, I will ask that it does the maximum to guarantee each club equal treatment."