Australia with the help of outstanding performances by Mitchell Starc and Nathan Coulter-Nile, managed to pull the match on their side by 15 runs against the Windies. West Indies won the toss and chose to bowl and they restricted Australia. David Warner, Usman Khawaja, Aaron Finch and Glenn Maxwell all fell cheaply with Sheldon Cottrell, Oshane Thomas and Andre Russell taking the wickets. Steve Smith held the key and he stitched a solid stand with Alex Carey as Aaron Finch's side staged a revival. Australia are facing the West Indies after 12 years and they have a 4-5 head-to-head record in World Cups. West Indies have not won a World Cup encounter against Australia since 1996 when they won in Jaipur. Get live cricket score and updates here.

22:03 hrs IST: Russell open his account with a HUGE SIX to Adam Zampa

21:56 hrs IST: Agains DRS wins and its a NOT OUT, Jason Holder gets another live

21:30 hrs IST: Another Umpire's decision reverted and its a NOT OUT. Worst day, I think, for the umpire in this World Cup.

21:18 hrs IST: WICKET! Shai Hope gets to his 11th fifty but Shimron Hetmyer is run-out. Terrible misunderstanding with Hope. After 27.2 overs, West Indies are 149/4.

21:13 hrs IST: After beating Hetmyer with a couple of googlies, the batsman eases the pressure with a slog swept boundary off Zampa. After 26 overs, West Indies are 138/3. Hetmyer 21, Hope 39.

19:40 hrs IST: Gayle vents his fury on Pat Cummins after the two wrong DRS calls. He blasts three boundaries and West Indies are 27/1 after four overs.

19:38 hrs IST: DECISION OVERTURNED AGAIN! The yorker from Starc and Gayle is late on the shot. He gets hit on the back pad and the umpire gives it out. Gayle again reviews and replays show that the impact is outside leg. What action. After three overs, West Indies are 12/1.

19:34 hrs IST: DECISION OVERTURNED! Starc bowls a full ball outside off and Gayle goes for the drive, Australia appeal and the umpire gives it out. Gayle immediately reviews and replays show no bat. The ball is hitting the stump.

19:28 hrs IST: WICKET! Good length ball angled across outside off from Pat Cummins, Lewis stabs at it and the edge is taken at second slip. West Indies are 7/1 after 1.4 overs.

19:24 hrs IST: A wayward start from Mitchell Starc as he gets his direction awry. West Indies are 7/0 after the first over. Serious pace from Starc as he bowls in excess of 150 kmph.

18:34 hrs IST: Coulter-Nile is at 80 which is the highest score HISTORY by an 8th wicket in World Cup

18:00 hrs IST: First SIX of the Australian innings by Coulter-Nile to Andre Russell

17:08 hrs IST: Carey finds the boundary again and the lower order is showing their worth . The partnership has reached fifty. Score after 27 overs, Australia are 129/5. Smith 37, Carey 33.

16:57 hrs IST: Carey blasts two boundaries, a cut through point off Cottrell and then he ends the over in style with a superb four to deep extra cover. After 24 overs, Australia are 110/5. Smith 26, Carey 25.

16: 36 hrs IST: Alex Carey survives an LBW shout and West Indies opt for the review. However, the ball is missing the stumps. They lose the review. Score after 18 overs, Australia are 80/5. Smith 23, Carey 0

16:32 hrs IST: WICKET MAIDEN! Holder bowls a maiden over and West Indies continue to apply the pressure. Can Australia's tail step up and get them close to 200?

16:27 hrs IST: WICKET! The partnership is broken and this is a massive blow for Australia. Stoinis pull a short ball from Holder straight to mid wicket where Nicholas Pooran takes the catch. After 16.1 overs, Australia are 79/5 with Stoinis gone for 19.

15:56 hrs IST: Stoinis gets on top of the bounce and smashes Carlos Brathwaite for two boundaries. After 10 overs, Australia are 48/4. (Smith 4, Stoinis 8)

15:53 hrs IST: Andre Russell is bowling with tremendous pace and hostility but he is bowling too many wides. After nine overs, Australia are 40/4. (Smith 4, Stoinis 0)

15:43 hrs IST: WICKET! This is superb stuff from Australia. Cottrell bowls a brilliant bouncer and Glenn Maxwell top-edges the pull shot, Shai Hope runs to his left and takes a good catch. After 7.4 overs, Australia are 38/4.

15:38 hrs IST: WICKET! Brilliant catch from Shai Hope and Australia are tottering. Khawaja makes room and goes for the cut, the edge flies to Shai Hope who dives to his left to take a great catch. Russell has struck and after seven overs, Australia are 36/3.

15:24 hrs IST: WICKET! Warner cuts a short ball from Cottrell to backward point and the Jamaican soldier gives the salute. After four overs, Australia 26/2 with Warner gone for 3.

15:19 hrs IST: Usman Khawaja gets off the mark with a boundary to the long on fence but Oshane Thomas responds with a ripping bouncer. Score after 3 overs; Australia 22/1 (Khawaja 5, Finch 2)

15:15 hrs IST: WICKET! Oshane gets this back of a length delivery to straighten outside off and Finch pokes at it. After 2.2 overs, Australia are 15/1. 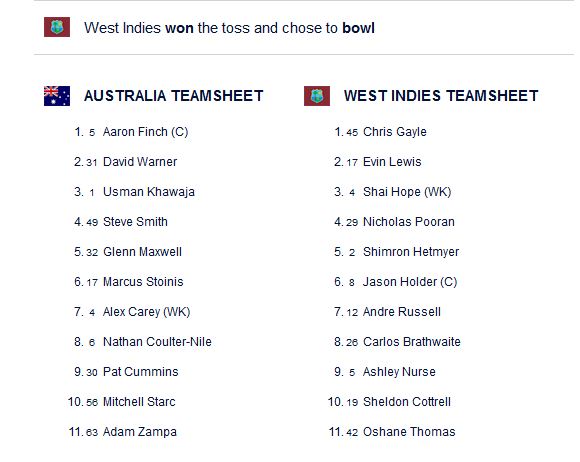 14:36 hrs IST: West Indies have chosen to bowl against Australia. Darren Bravo is out and Evin Lewis is in. Australia are unchanged.

14:31 hrs IST: The pitch in Trent Bridge is flat and there is a little bit of grass. It is not green grass and the conditions are sunny.

14:27 hrs IST: A win for either side today will help their confidence as the tournament progresses. Beating a five-time world champion is an added boost.

14:18 hrs IST: The resurgence of both West Indies and Australia is a magnificent story. West Indies held England to a 2-2 draw while Australia have won 11 consecutive games which includes the warm-ups. Australia know the habit of winning while for the West Indies, it is a question of sustained consistency.

14:09 hrs IST: The contest will come down to how the batsmen cope with the bowlers. Australia do play the cross-batted shots well and can cope with the short-pitched bowling well but can West Indies negotiate the brilliance of Starc and Cummins?

14:04 hrs IST: David Warner vs Chris Gayle: The battle of the two big-hitters. On the batting front, they are in superb touch. On the bowling front, West Indies have some hostile bowlers but when it comes to Australia, they have the class and pedigree of Mitchell Starc and Pat Cummins.

One day out from #AUSvWI at Trent Bridge, here is the pitch #CW19 pic.twitter.com/2umcdx2TXc

13:56 hrs IST: A warm welcome to the ICC Cricket World Cup clash between Australia and West Indies in Trent Bridge. West Indies started their campaign dominantly while Australia got over the line against Afghanistan. At Trent Bridge, Australia come back at a venue where they once conceded 481 against England in 2018. West Indies were saying 500 is possible? Will it happen today on a Trent Bridge shirtfront.