Rain Is Going To Dominate The India Vs New Zealand Clash At Trent Bridge, Nottingham And Fans Will Be Hoping That It Does Not Result In A Fourth Wash-out In The ICC Cricket World Cup 2019.

India and New Zealand are all set to clash on Thursday in Trent Bridge, Nottingham. The Kiwis have won their first three games and are on top of the group while India is also on a roll having won games against South Africa and Australia. New Zealand also has a 4-3 head-to-head advantage against India in World Cups and they have never lost in England. This makes for a mouth-watering contest. Virat Kohli’s team are dominant while Kane Williamson and his tactical acumen make this side dangerous. However, there is a problem heading into the clash and it has to with the heavens.

The rain, which has been lashing England in June, is all set to play a major part in this clash between India and New Zealand. The weather forecast for Nottingham is not good for June 13. There are intermittent showers predicted throughout the day, the kind of rain that settles down and refuses to go away quickly. Trent Bridge was lashed with heavy rain for two days prior to this match. Although it is not expected to be heavy, the rain could be consistent. The start of the day is expected to be cloudy but the rain could pick up as the day wears on. 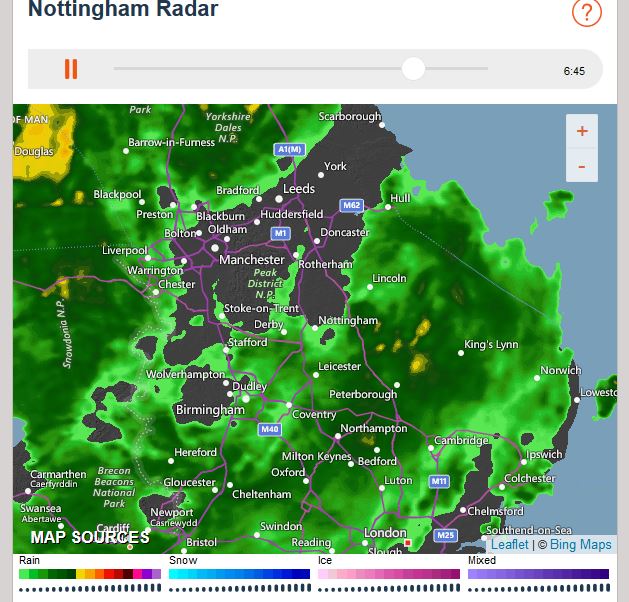 The India vs New Zealand clash could be affected by rain. (Image credit: Accuweather UK)

The rain has played havoc in the ICC Cricket World Cup 2019 with three games getting washed out. The Pakistan vs Sri Lanka clash and Sri Lanka vs Bangladesh clash in Bristol have all been washed out due to the rain. In fact, even a toss could not take place and this became the first World Cup in which two games were washed out without a ball being bowled. The South Africa vs West Indies clash in Southampton was also washed out but 7.3 overs were bowled in the Proteas innings.

New Zealand is currently on top of the table while India is in the third spot. Looking at the weather situation, things could remain the same but fans would be hoping that the rain gods have mercy and allow the match between India and New Zealand to take place.