The Indian Team Has Been In A Comfortable Position Against Bangladesh At Edgbaston With Rohit Sharma, Being The Highlight On India’s Batting Innings.

The Indian team has been in a comfortable position against Bangladesh at Edgbaston with Rohit Sharma, being the highlight on India’s batting innings thus far. After winning the toss on a batting friendly wicket, Virat Kohli asked the opposition to have a bowl. Both KL Rahul and Rohit Sharma stamped their authority on opposition bowlers right from the start and hammered them all-around the ground. In the course of the partnership, Rohit Sharma has been the aggressor with KL Rahul playing anchor’s role.

Scoring the 26th ton, Rohit Sharma also became the first batsman in the history of World Cup to score four centuries as an opener. His counterpart, KL Rahul, who scored fourth ODI fifty also looked good to give India a perfect start.

The duo strung a partnership of 180 runs together, before Rohit fell for 104 runs. Seeing his scintillating innings, India’s former batting all-rounder Yuvraj Singh took to the twitter and said, “And @ImRo45 walks closer to the Icc mos trophy #hitman you beauty 100 no 4 well played champion !!!”

Seeing the tweet, Kevin Pietersen couldn’t control his emotions and replied to Yuvraj saying, “Not if England wins the WC, Pie-Chucker!”

However, Yuvraj Singh was too smart with his reply and eventually trolled the Englishmen saying, “Let’s qualify first and then talk about wining and I’m talking about mos trophy not winning!”

Further, Kevin Pietersen had no answers from Yuvraj's response and just said, "I’m sure India will qualify mate!" to conclude the classic conversation. 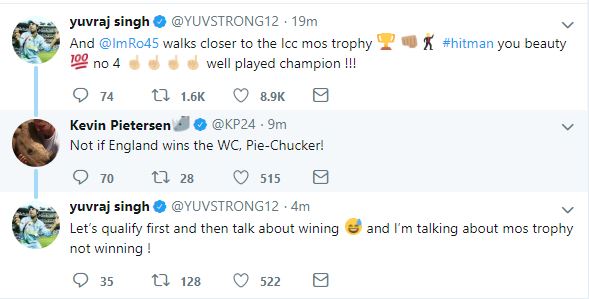