Khelo India: After Dipa Karmakar, Tripura's Priyanka Dasgupta Could Be India's Next Olympics Hope In Gymnastics

Priyanka Dasgupta Has Emerged As The Early Star Of The Ongoing Khelo India Youth Games (KIYG) 2020 In Guwahati After She Bagged Four Gold Medals.

The only daughter of a driver Priyanka Dasgupta needs proper diet and money for her training. (Photo Credit: Khelo India )

Indian trailblazer Dipa Karmakar was recently heaped with praises by none other than seven-time Olympic medallist gymnast Shannon Miller for showing young Indian athletes that anything could be achieved with hard work and passion.

Priyanka Dasgupta, touted as the next big thing in gymnastics, could well be what Miller was indicating. The 15-year-old, hailing from Karmakar’s state, has emerged as the early star of the ongoing Khelo India Youth Games (KIYG) 2020 in Guwahati after she bagged four gold medals in the all-around balancing beam, floor exercises and vaulting table events each in the Under-17 girls' competition.

Tripura's total medal tally at the competition is five so far.

Coming from a humble family, Priyanka not only admires Produnova-specialist Karmakar, but also takes her every advice intently.

“Dipa di told me to stay focused, not to get overawed by what the competition is doing, but to concentrate on my own performances,” Priyanka said in a recent interview.

“Di told me that the most important muscle in gymnastics is the brain. If you don't have the strength of will, you cannot win,” the class 10 student said.

Priyanka also gives credit to her coach, Soma Nandi, who she considers her “second mother”. 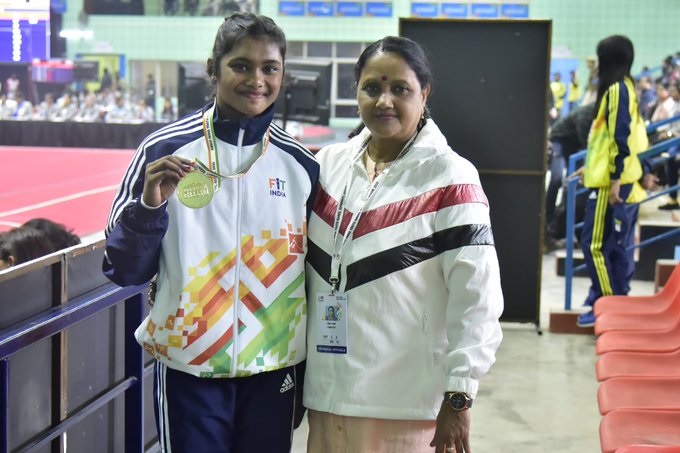 “Priyanka was only four years old when her mother took her to first Vivekananda Byamagar stadium in Agartala for coaching. When she came, I didn't think she was so talented. But she put her head down and always looked to learn new things. Dipa (Karmakar) was of course an inspiration,” Soma told News Nation over phone.

Soma had earlier coached Karmakar before her husband and Dronacharya awardee Bisweshwar Nandi. Now, Priyanka is also training under the husband-wife duo.

Referring to Karmakar's struggle, Nandi had earlier lamented that they had no apparatus at the Netaji Subhas Regional Coaching Centre (NSRCC) in Agartala. In absence of a vaulting platform, the coach-gymnast would stack mats on top of each other to make a platform, collect springs and shock absorbers from discarded scooters and attach them with plywood to make a spring board.

When asked if Priyanka had to face same hurdles, Soma said: “Not really, since the infrastructure at the NSRCC has improved.” “But Vivekananda Byamagar -- the oldest gymkhana of Agartala where Priyanka trained till her advanced stage -- still lacks proper apparatus… It’s a small club. The height of its roof is so low that Priyanka’s hands would slam it while taking jumps,” she said.

The only daughter of a driver, Soma added, Priyanka needs proper diet and money for her training.

“She can’t even afford to buy her kit. It’s me, Bisweshwar and Dipa who help her with money and other sporting stuff,” her coach adds.

Priyanka has nailed the girls' Under-17 all-around gold medal with a total of 42.60 points, improving on the 42.05 that West Bengal’s Protishta Samanta had secured en route to her yellow metal last year in Pune.

Despite a promising start, Priyanka missed out on a podium finish in the second edition by a mere 0.05 points after an unsatisfactory show on the uneven bars. With the bar set high -- an Olympics gold, she is now preparing to represent India in the 2024 and 2028 games.