Los Angeles Lakers Hosted The Portland Trail Blazers In Their First NBA Game Since A Helicopter Crash Claimed The Lives Of Bryant, His 13-year-old Daughter Gianna And Seven Others On Sunday.

LeBron James said the time for a Bryant memorial would come, but said he considered the match between LA Lakers and Portland Trail Blazers was (Photo Credit: Getty Images)

LeBron James spoke for everyone as the Los Angeles Lakers honoured the memory of franchise icon Kobe Bryant on Friday, delivering the simple message: "Not forgotten." It was a night of ceremony and tears at Staples Center as the Lakers hosted the Portland Trail Blazers in their first NBA game since a helicopter crash claimed the lives of Bryant, his 13-year-old daughter Gianna and seven others on Sunday. In the darkened arena, a purple-tinged spotlight picked out the two jerseys bearing Bryant's numbers of 8 and 24 hanging in the rafters. Bouquets of red roses held open two courtside seats in honor of Bryant and Gianna, while yellow roses sculpted the numbers of 8 and 24 in massive arrangements on the court.

As Usher sang "Amazing Grace," a hush fell over the crowd. Los Angeles Philharmonic cellist Ben Hong then played as a video montage of Bryant interviews, interspersed with on-court moments and intimate family pictures, was played on the massive scoreboard. After a 24.2-second moment of silence, Boyz II Men -- from Bryant's hometown of Philadelphia -- brought James to tears with their performance of the Star Spangled Banner in the dimly lit arena.

Then it was James's turn, his voice solemn as he recited the names of all nine killed when the helicopter went down in the rugged hills of Calabasas in suburban Los Angeles: Gianna's basketball teammates Alyssa Altobelli and Payton Chester, Alyssa's parents John and Keri Altobelli, Payton's mother Sarah Chester, basketball coach Christina Mauser, pilot Ara Zobayan and, finally, Kobe and Gianna Bryant.

"I've got something written down," James said. "They asked me to kind of stay on course or whatever the case may be. But Laker Nation, I'd be selling y'all short if I read off this shit so I'm gonna go straight from the heart," he added to cheers. "The first thing that comes to mind, man, is it's all about family. As I look around this arena, we're all grieving, we're all hurt, we're all heartbroken. When we go through things like this the best thing you can do is lean on the shoulders of your family."

James said the time for a Bryant memorial would come, but said he considered this night "a celebration" of Bryant's 20-year career -- all spent with the Lakers -- and of the life he was making since he retired in 2016. "This is a celebration of the 20 years of the blood, the sweat, the tears, the broken down body, the getting up, sitting down to everything, the countless hours, the determination to be as great as he could be. Tonight we celebrate the kid who came here at 18 years of age, retired at 38 and became the best dad we've seen over the last three years. The fact that I'm here now means so much to me," James added. 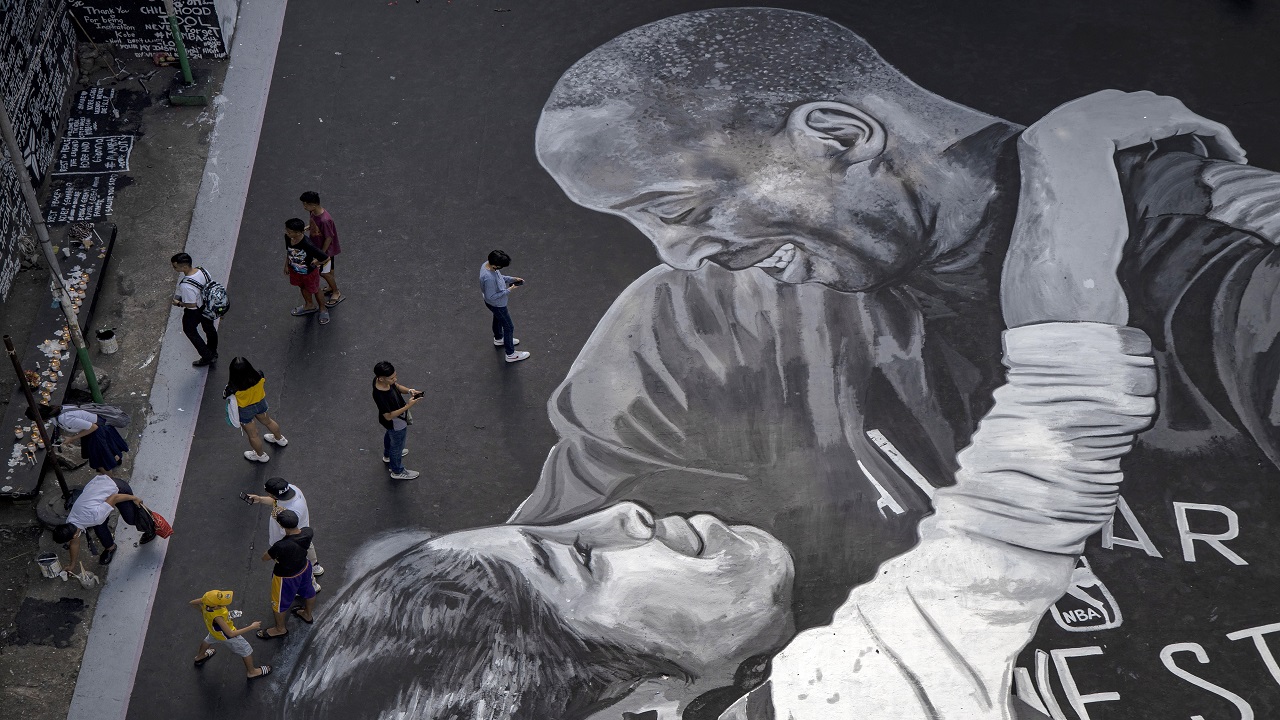 A helicopter crash claimed the lives of Kobe Bryant, his 13-year-old daughter Gianna and seven others on Sunday. (Image credit: Getty Images)

"I'm going to continue with my teammates to continue his legacy not only for this year but as long as we can continue to play the game of basketball that we love, because that's what Kobe Bryant would want. So in the words of Kobe Bryant: 'Mamba Out,'" James said, recalling Bryant's sign-off when he retired. But in the words of us: 'Not forgotten.' Live on brother."

And Bryant lived in symbols all over Staples Center -- a special KB logo painted on the court, and Lakers team introductions in which every player was introduced "From Lower Merion High School, No. 8, Kobe Bryant." James had prepared for the game with Bryant's No. 24 jersey hanging next to his locker -- the same locker Bryant used when he helped Los Angeles win five NBA titles. "He's been really a tower of strength for all of us," Lakers coach Frank Vogel said of James. "We're following his lead."

Staples Center officials had asked fans without tickets to watch the tribute from home, but many couldn't stay away. Thousands thronged the downtown arena and the neighboring LA Live entertainment complex, some adding to the memorials of flowers, stuffed animals, balloons and candles that have sprung up and some just finding comfort in being there.

Many wrote on massive paper-covered boards erected for the purpose, although pavements were also black with written messages. Impressionist painter Reza Safa said his reconstruction of a photograph showing Bryant carrying Gianna on his shoulders was a gift for Bryant's wife, Vanessa. "Tonight, I'm not going to the game," Safa said. "I'm just going to paint."