Vinesh Phogat Downed Two Tough Chinese Rivals On Her Way To The 53kg Gold Medal Bout, In Which She Overpowered Ecudor's Luisa Elizabeth Valverde During The Rome International Wrestling Tournament.

Her 'ground wrestling' remains a work in progress but Vinesh Phogat on Saturday avowed that a solid gold medal-winning performance in Rome shows that she is on the right track in the Olympic year. Competing in the first Ranking Series event of the 2020 season, Vinesh downed two tough Chinese rivals on her way to the 53kg gold medal bout, in which she overpowered Ecudor's Luisa Elizabeth Valverde. "Competing at an international event tests our training. It tells us whether we are moving in the right direction or not? So this result shows we are on right track since it's big year, it' an Olympic year," Vinesh, India's big medal hope at the Tokyo Games, told PTI from Rome.

She won by technical superiority against Ukraine's Khrystyna Bereza (10-0) and China's Lannuan Luo (15-5) before getting the better of Qianyu Pang (4-2) in the semifinal. "At this event, I competed with girls I had never wrestled before and against Pang I was wrestling for the third time. It was important to know if her style has changed or not. These tournaments help in assessing yourself and the rivals too." She was not much troubled by her rivals in Rome but Vinesh said she still lacks when it comes to scoring point from ground positions.

With coach Woller Akos, she has been trying to bring in the required changes and has made progress, but she is still a bit far from what they want to achieve. "We worked on strength and stamina in three months of off-season. The mat training began only in January. I mostly score points from standing wrestling and not much from ground wrestling. It's not easy to change but compared to last year's January, I am much better, so the coaches are happy," she said. "In India, I do score points from ground wrestling easily and against anyone but at this level, it's difficult. The more I compete in these competitions, the better for me. The training camps outside have helped me. Everything has changed since I switched the category. The training, the food, the technique, the style, everything has undergone a huge change. Body takes time to adapt though mind accepts. But both mind and body have to come together," the only woman wrestler to win a medal at the 2019 World Championship, said.

Year Since Competing In 53kg Category

It's been a year now that Vinesh is competing in 53kg category after dominating the 50kg weight division. She is gradually getting the belief that this is her category. "In 50kg, I knew each and every rival. Now in 53kg, also I have a fair idea against whom I have to use power and where I need to wrestle smartly. I can say that 60 to 70 percent I am there." 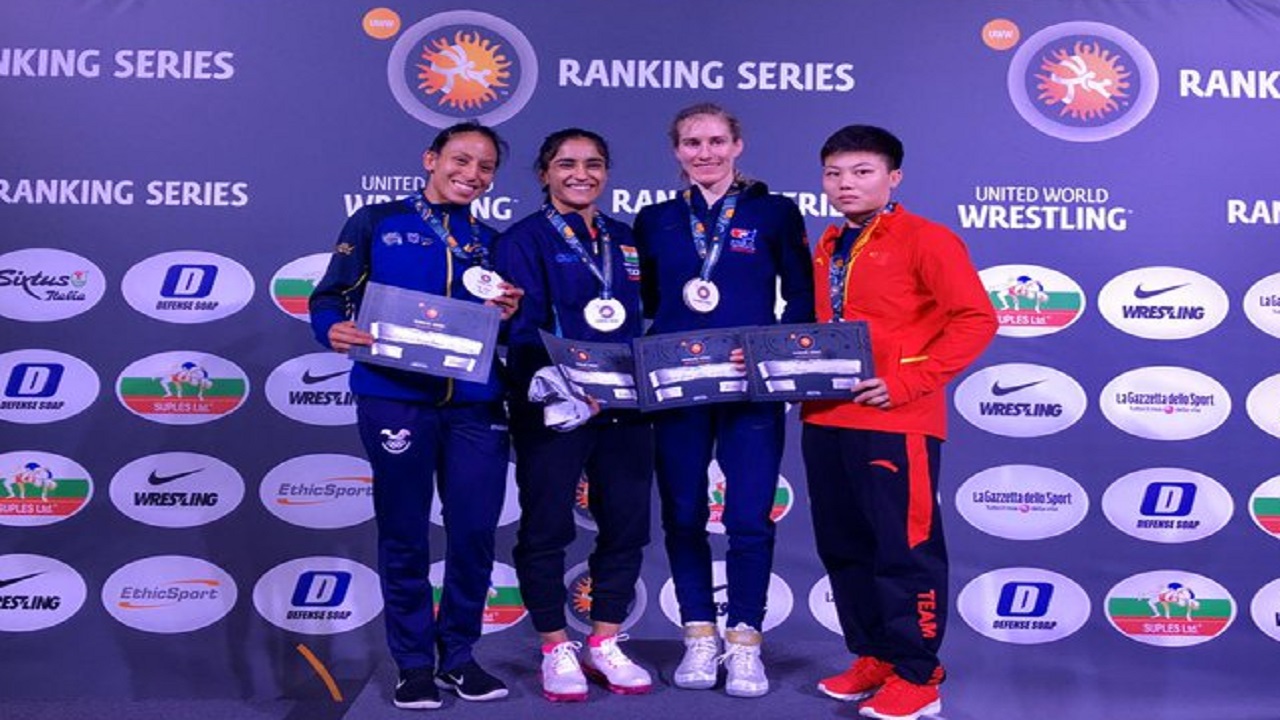 With coach Woller Akos, Vinesh Phogat has been trying to bring in the required changes and has made progress. (Image credit: Twitter)

If her win against Bereza was about a spectacular double leg attacks, the quarterfinal win over Luo was much tougher than the what the score-line suggested. Luo was a strong opponent, who led 5-2 at the end of first period but Vinesh turned it around with smart point-scoring moves from nowhere in the second period. Twice she threw Luo with moves from between the legs when the Chinese was holding her from the back. With two wrestlers having immense upper-body strength, jostling for upper hand from standing position was a sight to watch.

"The Ukraine girl (Bereza) was good, I had trained with her before coming here. The Chinese wrestlers were also good. But Luo was still scoring points off me. I so wanted to compete against them because I had never grappled with them. The Ecuador girl was also good. When you seem them practice it's different but on mat it's different. I needed to get a feel of all contenders, who I might be facing in Tokyo." Vinesh explained that how she could not stop Luo from going for double-leg attack.

"The strategy was not to give her leg but it did not happen. I had to get that feel, had not wrestled against her before. In the final too, Elizabeth was good in counter attackl and in power but I was more flexible and that was the difference. The Japanese are Chinese are clear, Elizabeth was a bit like me, creating moves from anywhere."