Air Quality In Melbourne, Habitually Ranked As One Of The World's Most Liveable Cities, Was Among The Worst On The Planet And Described As Hazardous By City Authorities

Maria Sharapova said she could feel "a bit of a cough coming out through the end of the second set". (Photo Credit: Getty Images)

Toxic smoke from raging bushfires hit the Australian Open build up Tuesday as a qualifier retired with breathing difficulties and Eugenie Bouchard needed medical attention, while other players struggled in soaring pollution. Air quality in Melbourne, habitually ranked as one of the world's most liveable cities, was among the worst on the planet and described as "hazardous" by city authorities. Qualifying for the first Grand Slam of the year started late due to the conditions and Slovenian Dalila Jakupovic did not cope well, bringing an early end to her match against Switzerland's Stefanie Voegele after a coughing fit. "I was really scared that I would collapse. That's why I went onto the floor because I couldn't walk anymore," she later told reporters, with searing heat not helping. It's not healthy for us," she added. "I was surprised, I thought we would not be playing today but we don't have much choice."

Former Australian Open semi-finalist Bouchard also had problems and needed a medical time-out after reportedly complaining of a sore chest. She recovered to win the third set and the match. Elsewhere in Melbourne, Maria Sharapova took to the court as scheduled against Germany's Laura Siegemund at the Kooyong Classic exhibition tournament. Both players agreed to call an early halt to the high-intensity contest at 7-6 (7/4), 5-5 in the German's favour after more than two hours, with the Russian star saying she could feel "a bit of a cough coming out through the end of the second set".

The deterioration in conditions followed months of deadly bushfires that have engulfed huge swathes of the Australian countryside, leaving at least 27 people dead and more than 2,000 homes destroyed.

Melbourne's city government urged residents to "stay indoors, keep windows and doors shut, and keep pets inside" on Twitter. Tennis officials have said there is little chance of the Australian Open being delayed, but that air quality is being monitored and umpires can halt matches to protect players' health. 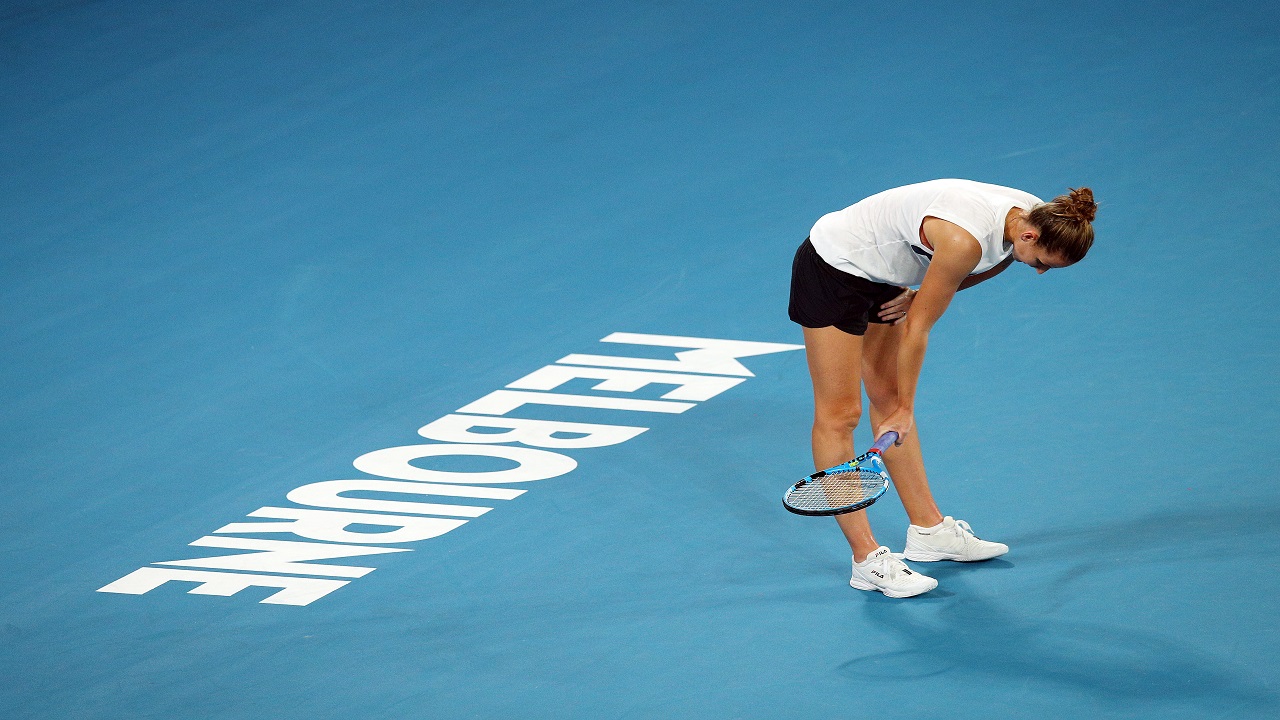 Practice on outside courts was suspended but big-name players including world number one Rafael Nadal were not affected, with their hit-outs going ahead on Rod Laver Arena with the roof closed. Australia's weather bureau said there was widespread smoke across central and eastern Victoria state, including Melbourne, which was expected to clear by Wednesday afternoon. World number five Elina Svitolina tweeted: "Why do we need to wait for something bad to happen to do an action," alongside a chart describing air quality in the city as "very unhealthy".

Mandy Minella, the world number 140 from Luxembourg, said she was "shocked" that qualifying was allowed to take place. "What about the health of all the people that have to work out there, especially the ballkids?" she tweeted. America's Noah Rubin complained on Twitter that players weren't being kept up to date and that the "lack of information on how to proceed is scary".

'Everyone was sent an email'

Tennis Australia chief Craig Tiley rejected the criticism and said that "everyone was sent an email". "It's unfortunate he missed that announcement for a variety of reasons," he said, adding that all decisions were made on expert advice. Tiley said last week it was unlikely that the Grand Slam would be delayed, regardless of the conditions, after world number two Novak Djokovic suggested the option should be on the table.

He noted that Melbourne Park has three roofed stadiums and eight other indoor courts, while meteorological and air-quality experts will be on site to monitor conditions. Any smoke hazards will be treated in a similar way to extreme heat and rain, with umpires able to stop play if it is considered too dangerous to continue. Several sports events have fallen victim to thick smoke since the fires first ignited, including last month's SOLAS Big Boat Challenge in Sydney and a Big Bash cricket match in Canberra.

Also Read | Ricky Ponting, Shane Warne To Come Out Of Cricket Retirement For THIS Noble Cause

But dozens of other fixtures have gone ahead. Leading tennis players and other sports stars have been quick to respond to the crisis, pledging money to relief efforts. Roger Federer, Serena Williams and Nadal are set to headline a fundraising exhibition at Melbourne Park on Wednesday.