Sania Mirza Had Injured Her Leg During Practice And With Her Right Calf Strapped Heavily, The Indian Tennis Star Struggled To Move Freely On The Court Which Also Affected Her Serve.

Sania Mirza and her Ukrainian partner Nadiia Kichenok were trailing 2-6 0-1 against the Chinese team of Xinyun Han and Lin Zhu when the Indian called it quits. (Photo Credit: Getty Images)

Sania Mirza's first Grand Slam outing after maternity leave ended with an early exit as the Indian ace retired mid-way into her women's doubles first-round match due to a calf injury in Melbourne on Thursday. Sania and her Ukrainian partner Nadiia Kichenok, who came into the major after winning the doubles title at the Hobart International, were trailing 2-6 0-1 against the Chinese team of Xinyun Han and Lin Zhu when the Indian called it quits. Sania has injured her leg during practice. She is returning to the circuit after a two-year break. Her right calf strapped heavily, Sania struggled to move freely on the court. It also affected her serve.

Kichenok was also struggling at the net, often missing easy put-away volleys. Serving at 2-4, Sania was broken by the Chinese and they served out the set easily. The Indian took a medial timeout after the first set. Soon after, the Indo-Ukrainian pair was broken in the first game of the second set and Sania found it difficult to continue. Sania had also pulled out of the mixed doubles event, forcing compatriot Rohan Bopanna to pair with Kichenok.

Also representing India in the mixed doubles is veteran Leander Paes, who has teamed up with Jelena Ostapenko, who had won 2017 French Open. They are pitted against local wild card entrants Storm Sanders and Marc Polmans.

Sania made a a dream start to her second innings after a two-year break by lifting the WTA Hobart International trophy with partner Nadiia Kichenok after edging out Shaui Peng and Shuai Zhang in the final in Hobart. The unseeded Indo-Ukrainian pair pipped the second seed Chinese team 6-4 6-4 in one hour 21 minutes. Playing her first tournament after giving birth to son Izhaan, the 33-year-old Sania has begun well in the Olympic year as she warmed up for the Australian Open in style. 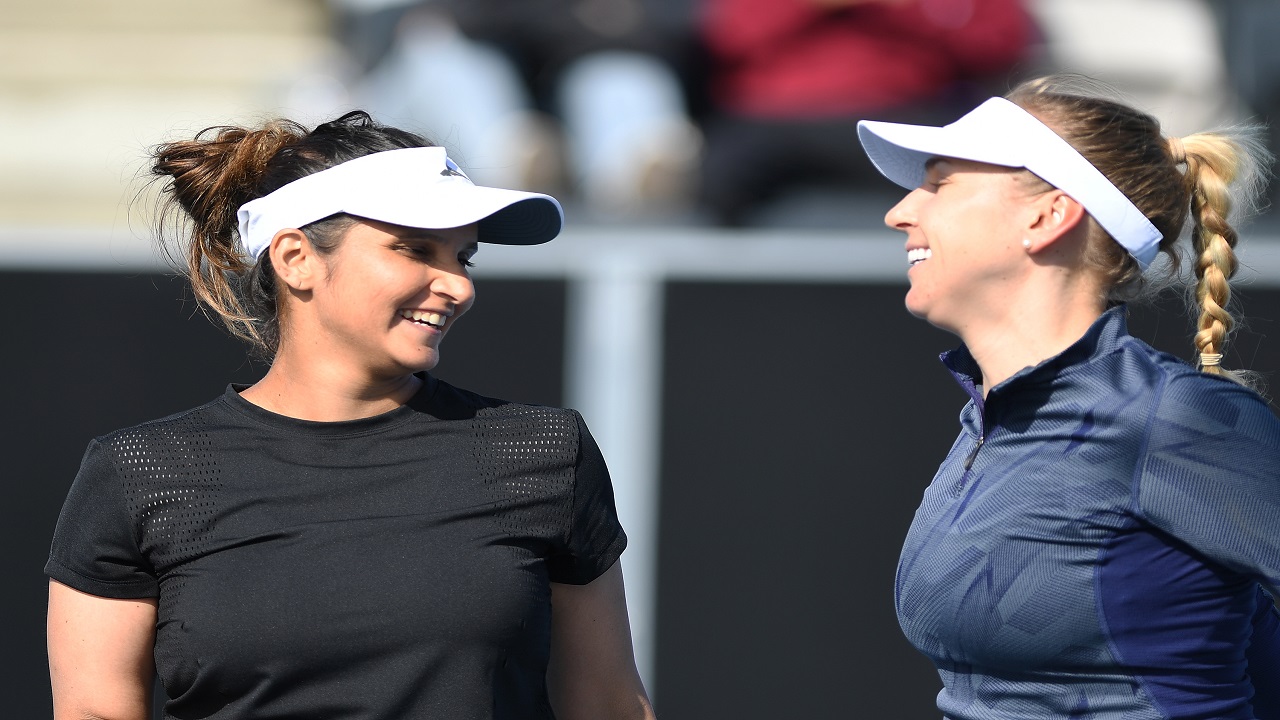 Sania has begun well in the Olympic year as she warmed up for the Australian Open in style by winning her 42nd WTA title. (Image credit: Getty Images)

It was Sania's 42nd WTA doubles title and first since Brisbane International trophy in 2007 with American partner Bethanie Mattek-Sands. Sania did not compete on the WTA circuit in the entire 2018 and 2019 seasons to start a family with Pakistani cricketer husband Shoaib Malik.

Sania and Nadiia began by breaking the Chinese players in the very first game of the match but only to drop serve in the next. The two pairs played close games towards the end and at 4-4, 40-all, Sania and Nadiia got the crucial break, earning the opportunity to serve out the set. There was no twist in 10th game with Sania and Nadiia comfortably pocketing the first set.