Bill Goldberg Defeated The Fiend Bray Wyatt To Become The Universal Champion While The Undertaker Returned To Win The Gauntlet Match By Pinning AJ Styles In WWE Super Showdown In Riyadh, Saudi Arabia.

Bill Goldberg became the Universal champion for the second time as he defeated The Fiend Bray Wyatt. (Photo Credit: Twitter)

For the fifth year in running, the World Wrestling Entertainment (WWE) made their presence felt in Saudi Arabia by hosting the WWE Super Showdown in Riyadh, Saudi Arabia. The pay-per-view was seen as more of laying the base for the future storylines and feuds heading into Wrestlemania and the results more or less confirmed what could be the drawcard for the main pay-per-view at Wrestlemania. The only major surprise was the change in the Universal Championship with Goldberg getting the better of the 'The Fiend' Bray Wyatt in what was a two-minute squash match. In Goldberg's contests ever since his return to the WWE in the 2016 Survivor Series, the pattern has emerged of his feuds. Spear, Jackhammer, 123 and the win.

Be it Brock Lesnar, Kevin Owens and Dolph Ziggler, Goldberg has always kept the matches short and sweet. Even against Bray Wyatt, Goldberg employed the same blueprint. Staring eye-to-eye with 'The Fiend', Goldberg employed three spears but each time Bray Wyatt, known to take immense amount of punishment, bounced back. Wyatt employed the Mandile Claw against Goldberg twice but he countered both times. Goldberg hit the jackhammer and pinned Wyatt to become the Universal champion again. In many ways, the result for Goldberg was redemption for his loss against the Undertaker last year at Crown Jewel when he suffered a concussion before the match and the entire game was botched. For 'The Fiend', this will be an interesting result and it remains to be seen whether he will challenge Goldberg again at Wrestlemania or will he have a new opponent. 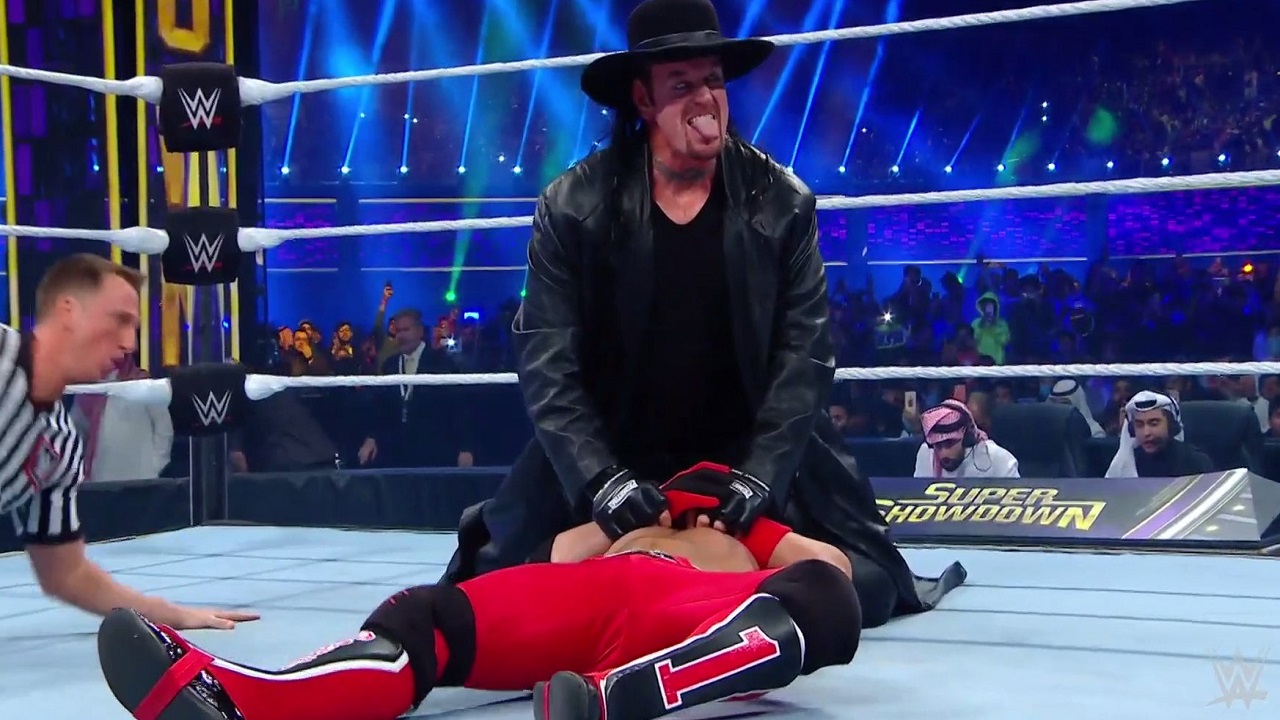 The Tuwaiq Trophy Gauntlet Match was the first-time this kind of match took place in Super Showdown and it involved R-Truth, Bobby Lashley, AJ Styles, Andrade, Eric Rowan and Rey Mysterio. The match saw AJ Styles beat R-Truth, who had earlier defeated Bobby Lashley and Eric Rowan. Styles prepared to face Rey Mysterio but he was getting beaten up backstage by Luke Gallows and Anderson. When Styles thought he was the winner because Mysterio was laid out, the Undertaker's music played out.

The 'Dead Man', who had been making sporadic appearances in the WWE, chokeslammed Styles and won the Gauntlet match. It will be interesting to see what The Undertaker does in Wrestlemania and whether his opponent will be Styles or someone else. In other results, Brock Lesnar defeated Ricochet in under two minutes while Bayley won the first-ever women's championship match by beating Naomi. Roman Reigns defeated King Corbin and this result could see him challenge Goldberg for the Universal Title at Wrestlemania. On Friday Night Smackdown, the fate of Goldberg and the return of 16-time champion John Cena could set the new path on the road to Wrestlemania.