If The Colour Reply Option Comes Into Existence, A User Who Posts The Initial Tweet Would See Their Responses In Grey While Replies From Followers Would Be In Blue.

From a revamped desktop layout to the increased character limit, there have been several changes to Twitter in the last few months. While Twitterati are yet to get used to the revised version, the American microblogging site is again teasing its 321 million global users with another upcoming app redesign. The changes, which include 'account switching' feature like Gmail or YouTube, is aimed at helping users see what's happening faster.

"A whole new Twitter is coming. New features and a new look are launching soon. Bookmarks, account switching, dark mode and so much more - before long, you’ll be able to see what’s happening even faster," a message on Twitter’s desktop app reads.

READ | Are you using a 'Fake' WhatsApp hit by malicious software? Here is how to check 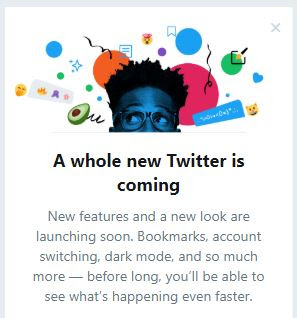 While account switching would allow users to handle multiple accounts swiftly switch while staying logged into all of their accounts, the idea behind the prototype app 'twttr' is to improve conversation features for its main platform. To make conversations appear chat-like, Twitter is planning a new round design for replies.

Moreover, the app has also been testing a "subscribe to conversation" feature that would notify users every time a tweet is added to the conversation in order to keep up with it, without actually becoming a part of the thread.

Since Twitter already features a dark mode for both of its mobile and desktop apps, users are eager to know what new tweaks are waiting for them as part of its redesign programme.

If the colour reply option comes into existence, a user who posts the initial tweet would see their responses in grey while replies from followers would be in blue.

Some recent app revisions include increased character limit from 140 to 280 and changed symbol of 'Fav' from a star to a heart. While the iOS and Android apps saw several design updates, the desktop website was changed in April, 2019 after five straight years. It didn't witness much change since 2014. In 2015 the profile pages were redesigned and later the top menu was changed from "Home Connect Discover Me" to "Home Notifications Messages".

Twitter is an American online news and social networking service on which users post and interact with messages known as "tweets". Tweets were originally restricted to 140 characters, but this limit was recently doubled to 280 for all languages except Chinese, Japanese, and Korean.