When the newly elected UK Prime Minister Boris Johnson made his first official remarks outside his new residence this week, young lady draped in floral pink maxi dress stood off to the side with his staff, however, did not accompany him to his audience with Queen Elizabeth. The new Prime Minister has Carrie Symonds, 31, as first girlfriend with a political career. According to reports, Carrie is the daughter of Matthew Symonds, a co-founder of the Independent newspaper. Symonds had a privileged upbringing in southwest London where she attended her school.

Carrie Symonds was part of the campaign team that helped to get Johnson re-elected as mayor of London in 2012, according to CNN report. The couple have been the subject of intense British media interest since they began dating. 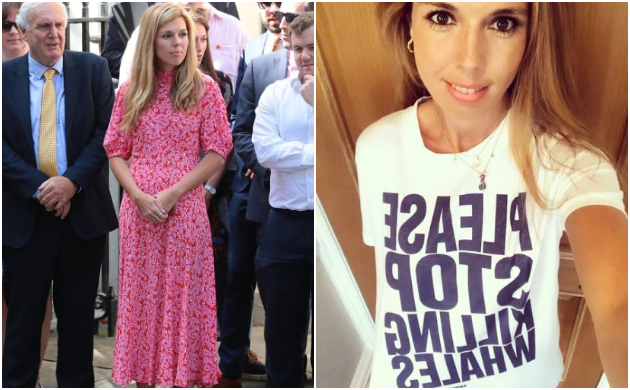 Reportedly, Johnson is in the process of divorcing his wife, Marina Wheeler. Johnson has four children and was married to her for 25 years.

Carrie Symonds previously worked as head of communications for the Conservative Party headquarters and served as an adviser to Sajid Javid, who is now home secretary.

"When Johnson moves into London’s 10 Downing Street, he will reportedly be bringing his new beau, making them the first unmarried occupants of the historic residence," according to The Sun.

Boris Johnson officially became Britain's new Prime Minister on Wednesday and promised to leave the European Union on October 31 "no ifs, no buts" under a "new deal" with the 28-member economic bloc.

The 55-year-old former foreign secretary and London Mayor laid out his vision as Prime Minister in his first speech on the steps of Downing Street after a meeting with Queen Elizabeth II at Buckingham Palace, during which the 93-year-old monarch formally invited him to form a government after accepting Theresa May's resignation a little earlier.

Johnson becomes the 14th Prime Minister to be appointed by Queen Elizabeth II, the 55th to hold the post of British PM and the third in fairly quick succession since Britain voted to leave the EU in June 2016 -- following on from David Cameron and Theresa May.