The US President Also Suggested Turkey To Negotiate A Deal With General Mazloum And Sent A Copy Of A Letter He Received By The Kurdish Leader.

US President Donald Trump on Wednesday said that he did not give a green signal to Turkey President Recep Tayyip Erdogan to invade northern Syria. Trump said that he had written a "very powerful letter" to warn the Turkish president in the days after announcing his decision to pull back US troops from the region. In the letter published by the News York Times, Trump wrote: "Let's work out a good deal! You don't want to be responsible for slaughtering thousands of people, and I don't want to be responsible for destroying the Turkish economy — and I will. I've already given you a little sample with respect to Pastor Brunson." 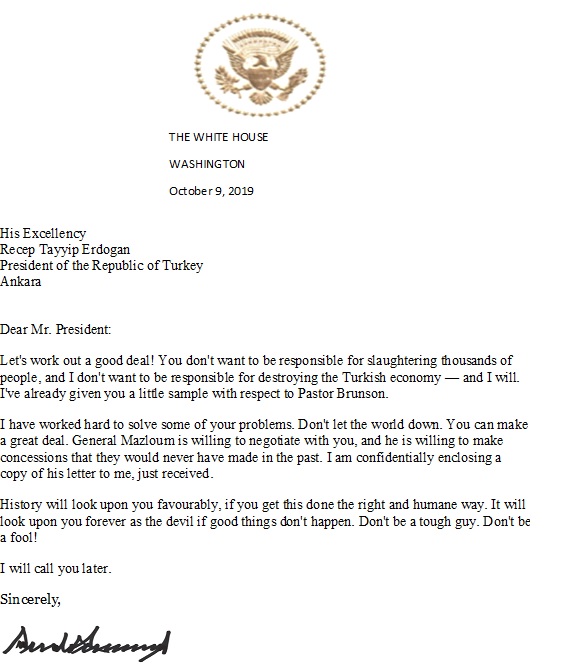 Earlier on Wednesday, Trump had said US is being "very tough" on Turkey and strongest sanctions have been imposed on Ankara. Trump, who was speaking to reporters at the White House, reiterated that his administration wants to bring US soldiers back home. A delegation led by vice-president Mike Pence is set to leave for Ankara in order to stop Turks to stop their ground offensive in Syria.

The delegation including Secretary of State Mike Pompeo and National Security Advisor Robert O’ Brien will meet Turkish President Recep Tayyip Erdogan on Oct 17. "Mike (Pence) is getting ready to make a big trip. He will be leaving tomorrow (Wednesday). We have a delegation leaving today and Mike is setting it up with Secretary Pompeo. They will be leaving tomorrow and we are having very strong talks with a lot of people," Trump said.