In One Of The Worst Attacks In Decades, 290 People, Including Nine Indians Were Killed And Around 500 Others Sustained Serious Injuries.

Easter celebrations turned into national mourning as a series of blasts rocked Sri Lanka churches and hotels on Sunday. In one of the worst attacks in decades, 290 people, including nine Indians were killed and around 500 injured. The blasts - one of the deadliest attacks in the country's history - targeted St Anthony's Church in Colombo, St Sebastian's Church in the western coastal town of Negombo and Zion Church in the eastern town of Batticaloa around 8.45 a.m. (local time) as the Easter Sunday mass were in progress, police spokesman Ruwan Gunasekera said. Explosions were reported from three five-star hotels - the Shangri-La, the Cinnamon Grand and the Kingsbury in Colombo.

Here are LIVE updates from the island nation:

Secretary of State Mike Pompeo vowed Monday that the United States will keep fighting "radical Islamic terror" after devastating attacks in Sri Lanka that targeted churches on Easter and hotels.

We regret to confirm the deaths of two more individuals in the blasts yesterday:
- Vemurai Tulsiram
- S R Nagaraj@SushmaSwaraj

Another fresh explosion rocked Colombo on Monday. The blast took place in a van near a church in where scores of people were killed on Sunday. Bomb squad officials were trying to defuse it when the bomb went off, according to news agency Reuters.

Coast Guard on high alert along the maritime boundary with Sri Lanka. Ships and maritime surveillance aircraft Dornier deployed on the maritime border to prevent any attempts by suicide bombing perpetrators to escape from Sri Lanka.

National Thowheed Jamath responsible for Easter attacks, says govt. The government admits to massive intelligence failure, issues apology to the victims. Lanka was alerted by a friendly country on April 4.

Sri Lankan authorities order curfew in Colombo from 8 pm to 4 am, reports Reuters.

7 JDS members who travelled to Sri Lanka are missing. These JDS members left to Sri Lanka on 20th of April after finishing Election Campaigning for Veerappa Moily. No information about their whereabouts them.

There were disruptions to flights, but Sri Lanka's national carrier Sri Lankan has already asked leaving passengers to report to check-in counters at least four hours prior to departure because of tight security checks at the Bandaranaike International airport.

Police have arrested 24 suspects till now in connection with attacks on churches and hotels. 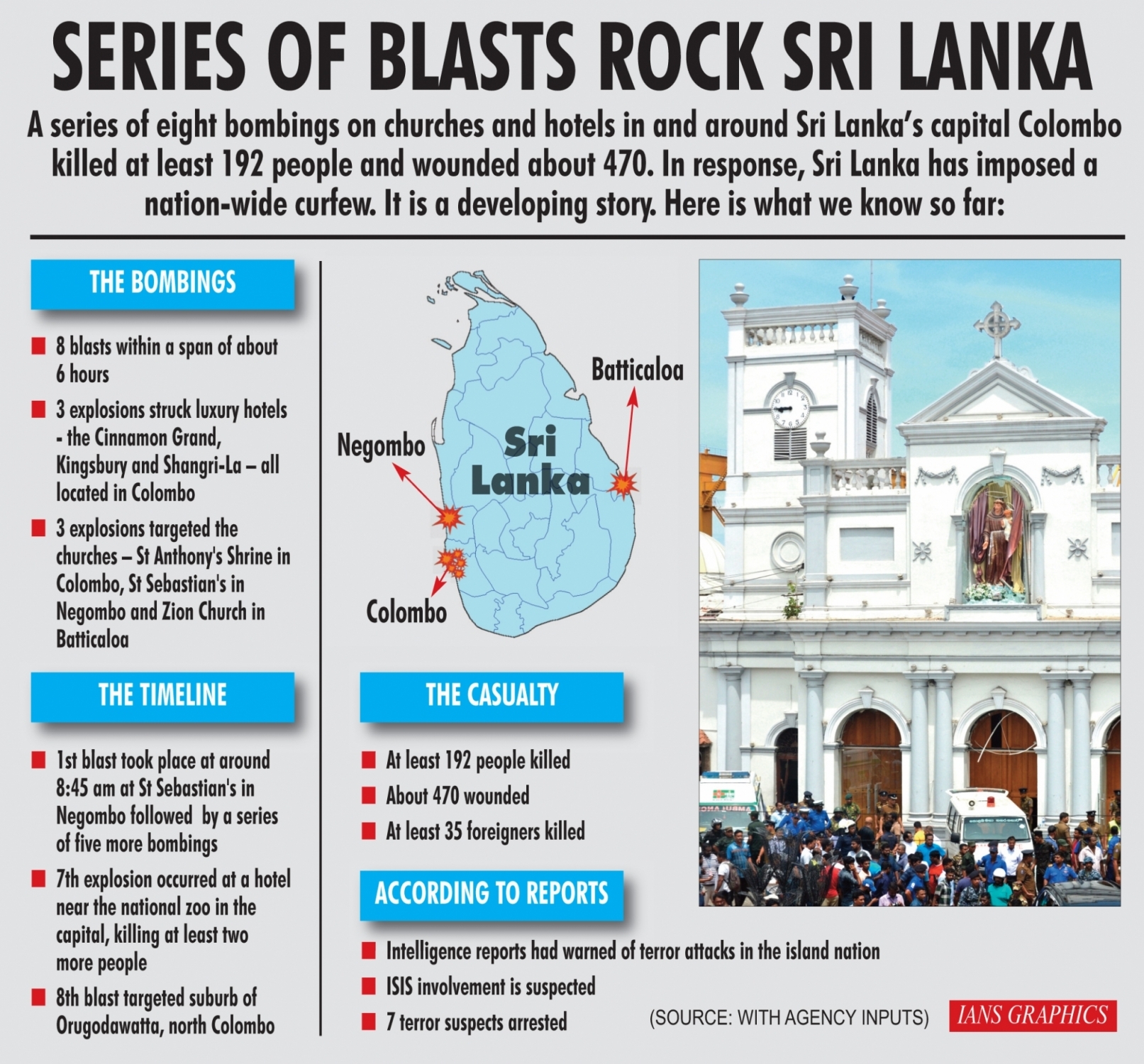 Sri Lankan police have arrested 13 men in connection with bomb blasts on churches and hotels that killed more than 200 people, officials said Monday. Authorities have not made public details on those held after Sunday's attacks. But a police source told AFP the 13 were detained at two locations in and around Colombo. The source said the 13 men are from the same radical group.