US says Pakistan must act against terror groups, urges 'restraint' after India's strike on Jaish

We Encourage India And Pakistan To Exercise Restraint, And Avoid Escalation At Any Cost, US Secretary Of State Mike Pompeo Said.

The United States on Wednesday said that Pakistan must act against terror and urged both India and Pakistan to exercise 'restraint' after the Indian Air Force carried out an airstrike on terror camps across the LoC in a pre-dawn operation on Tuesday. "We encourage India and Pakistan to exercise restraint, and avoid escalation at any cost," US Secretary of State Mike Pompeo said in a statement today after speaking with the foreign ministers of both countries. "I spoke to Pakistani Foreign Minister Shah Mehmood Qureshi to underscore the priority of de-escalating current tensions by avoiding military action and the urgency of Pakistan taking meaningful action against terrorist groups operating on its soil," Pompeo said as quoted by news agencies. 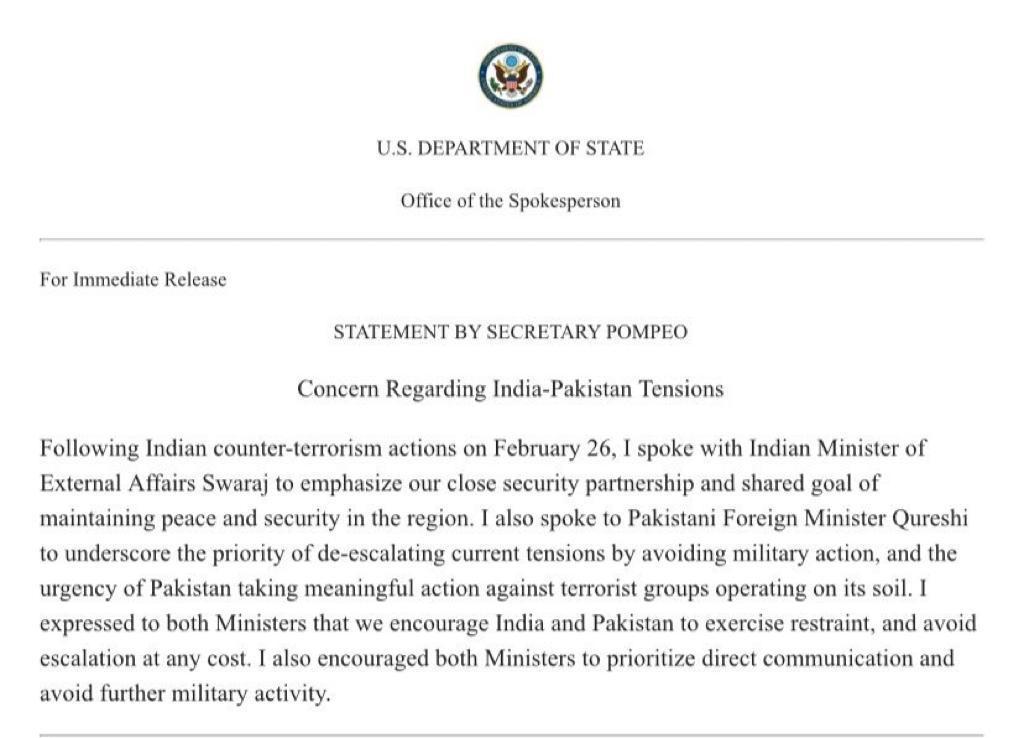 External Affairs Minister Sushma Swaraj raised Pulwama terror attack issue during the bilateral meeting with her Chinese counterpart in Wuzhen on Tuesday. Swaraj, who will hold trilateral talks with China and Russia later today, said that the Pulwama terror attack is a grim reminder that there should be zero tolerance against terrorism and ‘decisive action’ is need of the hour. The meeting gains significance in the backdrop of the Indian Air Force’s air strike in Pakistan’s Balakot, in which major terror camp run by the Jaish-e-Mohammed was completely destroyed.

Swaraj extensively spoke about the surprise mission and said that, “It wasn't a military op, no military installation targeted. Objective was to act against terrorist infrastructure of JeM to pre-empt another terror attack in India. India doesn't wish to see further escalation of situation. It'll continue to act with responsibility and restraint.”

“In the light of continuing refusal of Pak to acknowledge and act against terror groups on its territory and based on credible info that JeM was planning other attacks in parts of India, Government of India decided to take pre-emptive action and target was selected in order to avoid civilian casualties,” Swaraj added.