The White House Released Its Proposal For The Future Borders Of Israeli And Palestinian States As Part Of President Donald Trumpâ€™s Controversial Peace Plan.

US President Donald Trump on Tuesday described it as historic and a â€œgiant stepâ€ towards peace. (Photo Credit: File Photos)

US President Donald Trump on Tuesday describing it as historic and a “giant step” towards peace, unveiled his Middle East peace plan aimed at solving the Israeli-Palestinian conflict. Trump standing along with Israeli Prime Minister Benjamin Netanyahu proposed a “realistic” two-state solution to solve one of the world’s longest-running conflicts.

The White House released its proposal for the future borders of Israeli and Palestinian states as part of President Donald Trump’s controversial peace plan.

The map shows the West Bank area containing some 15 Israeli settlements, connected to the Gaza Strip area by only a tunnel. This would technically fulfil Trump’s promise of a contiguous Palestinian state.

Trump said that under his vision, Jerusalem “will remain Israel’s undivided, very important capital.” He proposed Palestinian capital in Eastern Jerusalem and that US will set up its embassy there.

“My vision presents a realistic two-state solution,” he said.

Together we can bring a new dawn in the Middle East, Trump said as he urged the Palestinians to accept his deal and bring peace in the region.

Describing his plan as historic and deal of the century, Trump claimed that his proposal has the support of the world leaders in particular those in the region. 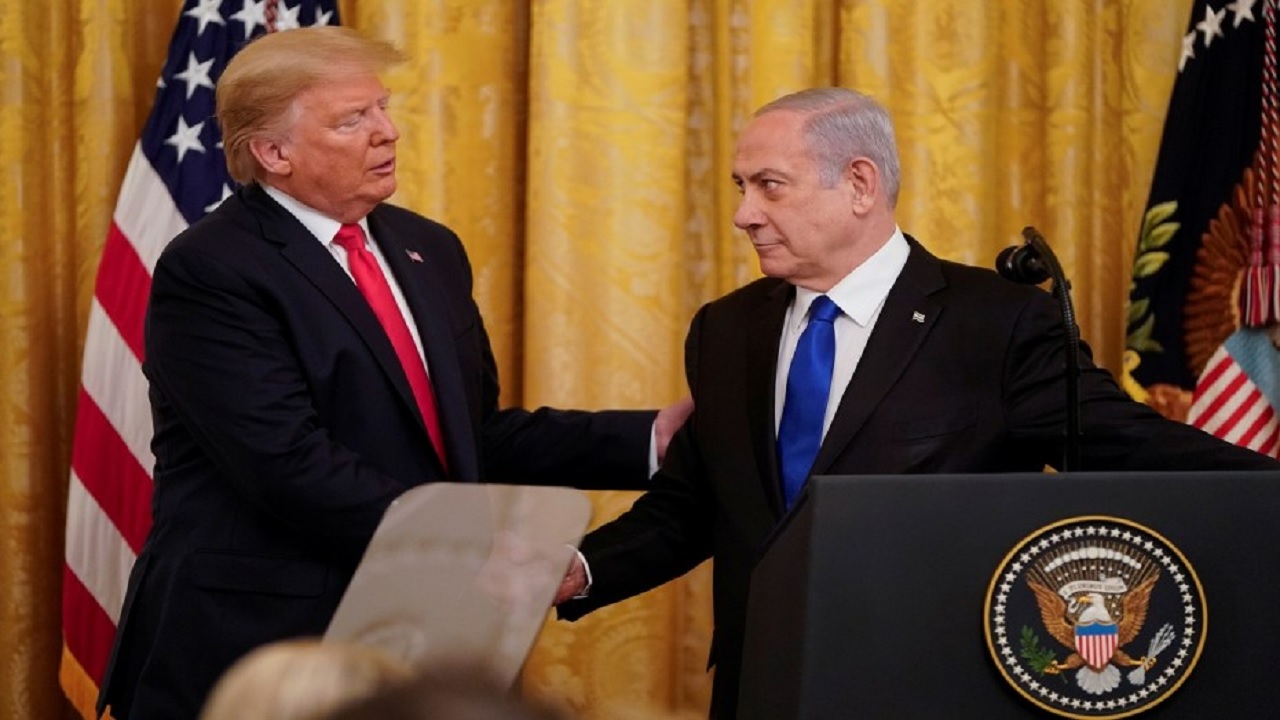 “After the nonsense that we heard today we say a thousand no’s to the Deal of The Century,” Abbas said on Tuesday at a press conference in the West Bank city of Ramallah, where the Western-backed Palestinian Authority is headquartered.

He said the Palestinians remain committed to ending the Israeli occupation and establishing a state with its capital in east Jerusalem.

“We will not kneel and we will not surrender,” Abbas said, adding that the Palestinians would resist the plan through “peaceful, popular means.”

Netanyahu hailed Trump’s plan as ‘historic day’ for Israel.  He compared Trump’s Plan with the day to May 14, 1948, when the then President Harry Truman became the first world leader to recognise the State of Israel.

The plan, he said, will strike the “right balance” where other plans have failed.

Unveiling his plan, Trump said, “I was not elected to do small things or shy away from big problems.”

Netanyahu said that he is now willing to negotiate peace with the Palestinians “on the basis” of the US peace.