Yearender 2019: 2019 Started Off With Donald Trump Entering His Third Year Of Presidency And His Lot Many Election Promises Yet To Fructify. With The Kind Of Unconventional Style Of Administration

2019 started off with Donald Trump entering his third year of presidency and his lot many election promises yet to fructify. With the kind of unconventional style of administration, Trump displayed till now, the year was bound to be eventful. Britons were yet struggling to get an exit from the 28-country club and they sensed in Boris Johnson, their last resort, for a successful Brexit. In the southern hemisphere, the world's largest democracy, India went to polls and gave a thumping majority to the incumbent government. Moreover, Pentagon hunted down Baghdadi into a dead tunnel and decided to pull out from Syria leaving Kurds at the mercy of Turkey. 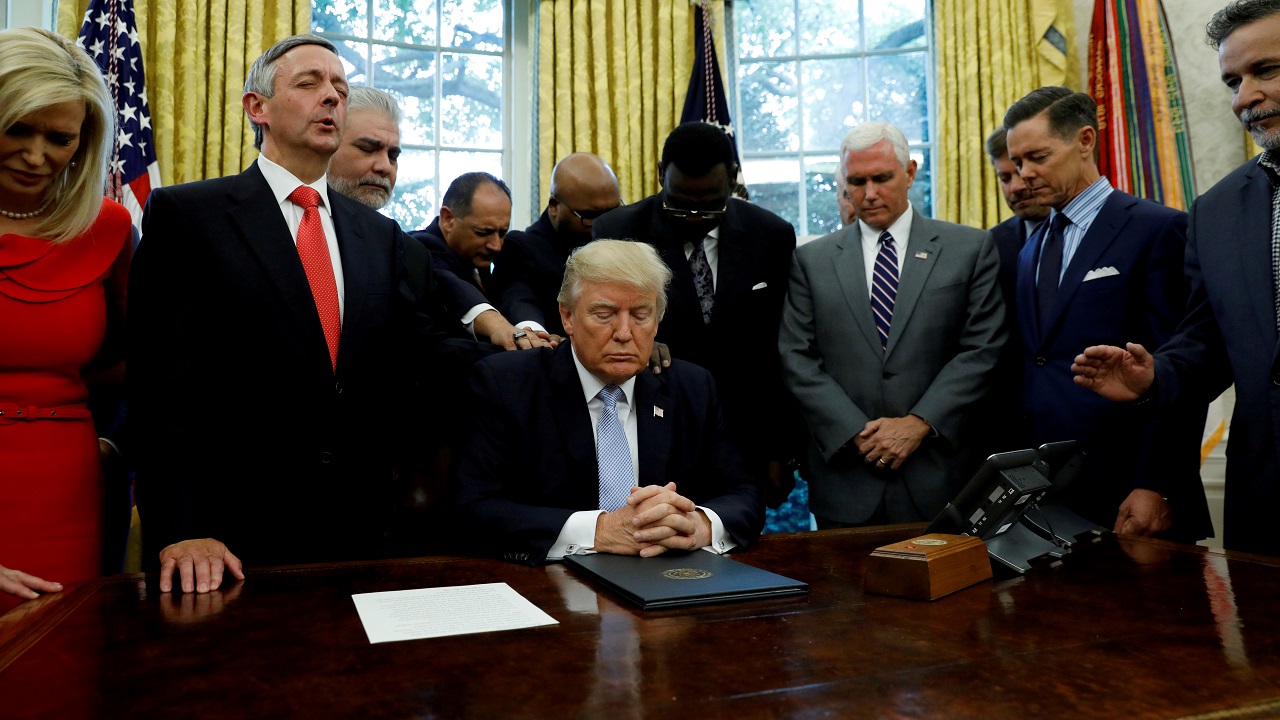 Trump becomes the third US President to be impeached. (Photo Credit: Reuters)

United States, the world's oldest democracy has seen 45 presidents with Donald Trump being the latest. However, in entire democratic history, the United States has impeached only three presidents. Trump became the very third in this very year on December 19. He was impeached by the House of Representatives with charges of 'abuse of power' and 'obstructing Congress'. With this, Trump joins a club of presidents, Andrew Johnson in 1868 and Bill Clinton in 1998, who were impeached by the house over charges of "high crimes and misdemeanors" cited in the US Constitution. Moreover, no president in the 243-year-long US history has been removed from office by impeachment. Impeachment of a president requires a two-thirds majority in the 100-member Senate. In Trump's case, at least 20 Republicans would be required to vote against Trump to remove him from office. Before Trump seeks re-election in 2020, he'll face a Senate trial. 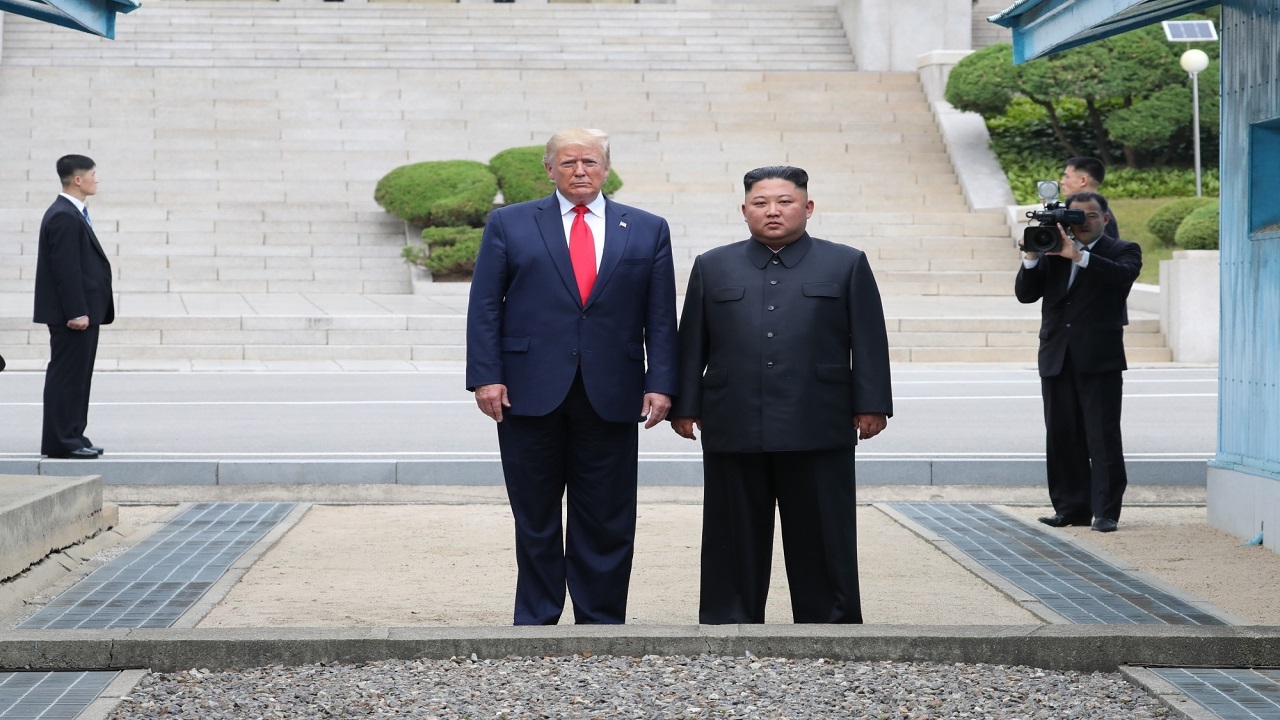 Donald Trump became the first US President to set foot in North Korea on June 30, 2019. Trump, whose election campaigns were replete with 'teaching lessons' to the North Korean dictator, Kim Jong Un, finally chose to set differences aside and iron out all the contentious points between both the belligerents. After meeting the North Korean leader, Trump had said that many North Koreans were 'literally in tears' when he stepped into their country before his historic meeting with Kim Jong-un in the demilitarized zone between the peninsula. Trump went to the demilitarized zone (DMZ) with South Korean President Moon Jae-In and met with troops stationed there. The North Korean leader then invited Trump to cross into his country. Trump accepted his offer and walked over the demarcation line, becoming the only sitting US president to set foot inside North Korea. However, by the end of the year, the relation between Washington and Pyongyang went south with dictator Kim threatening the United States with a 'Christmas gift'. Trump, on the other hand, has said that North Korean leader Kim Jong Un may be giving "a nice present" and it can be as nice as "beautiful vase" for Christmas. 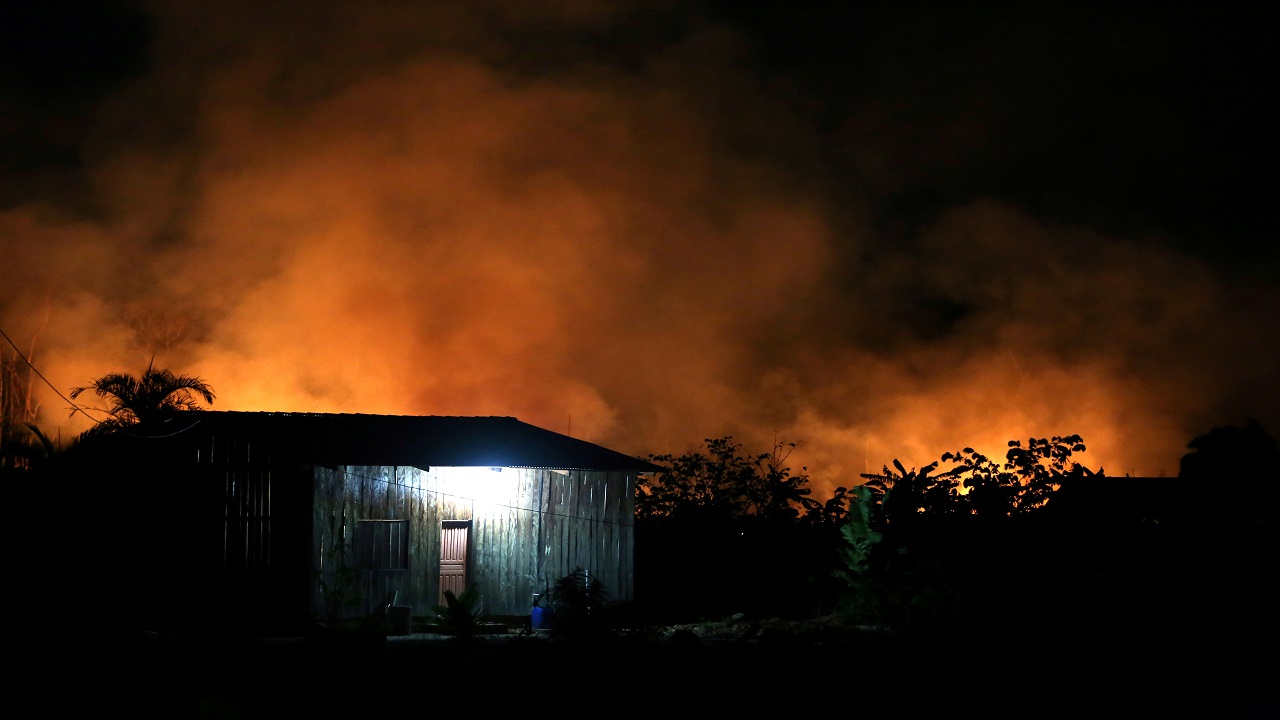 A huge wildfire devoured large sections of the Amazon rainforest in August this year. Many cities in Brazil were choked with smoke. One of the fiercest fires in Human history, the Amazon fire swept across 9,50,000 hectares of the forest. Brazil, at last, had to deploy the army to take the situation under control. Moreover, the Amazon fires brought Brazil and France in a state of conflict after French President Emmanuel Macron expressed his desire to discuss the tragedy in the G7 summit, held in France's coastal city, Biarritz. The Brazilian leadership had taken a jibe at Macron saying, "Brazil is a democratic, free nation that never had colonialist and imperialist practices, as perhaps is the objective of the Frenchman Macron." 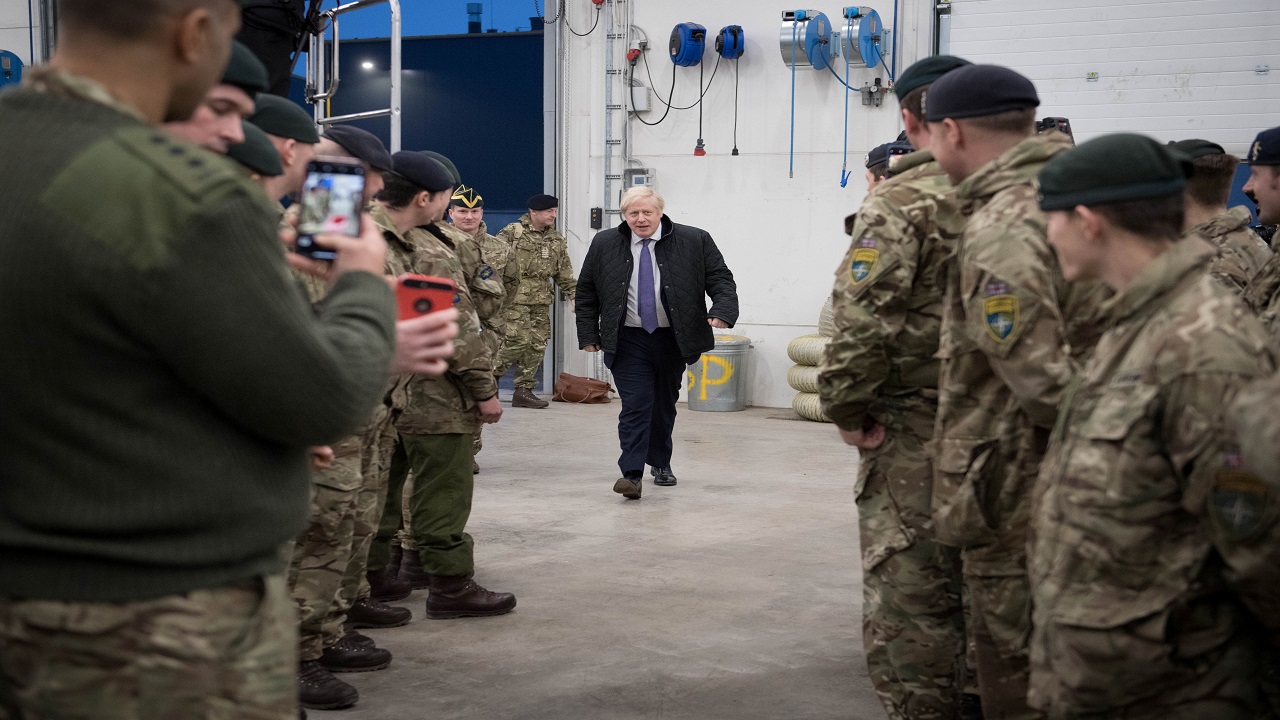 The victory of Tories was mainly based on Johnson's 'Get Brexit Done' message. (Photo Credit: Reuters)

In the most emphatic majority since the 1980s under Margaret Thatcher, the Conservative party led by Prime Minister Boris Johnson returned to power in the United Kingdom in the general elections in December this year. The victory of Tories was mainly based on Johnson's 'Get Brexit Done' message. Johnson's Conservatives bagged 365 seats in the 650-strong House of Commons. On the other hand, the Labour Party notched one of its worst performances since 1935. Importantly, north England, which has been the traditional stronghold of the Labour party, voted strongly on the basis of Brexit. However, the year started with Britain facing a March 29 deadline for leaving the European Union. The then Prime Minister, Theresa May failed to persuade the House of Commons to approve the deal she struck with the EU. After House of Commons voted down her deal three times, May had resigned.

Were Kurds Betrayed By The US? 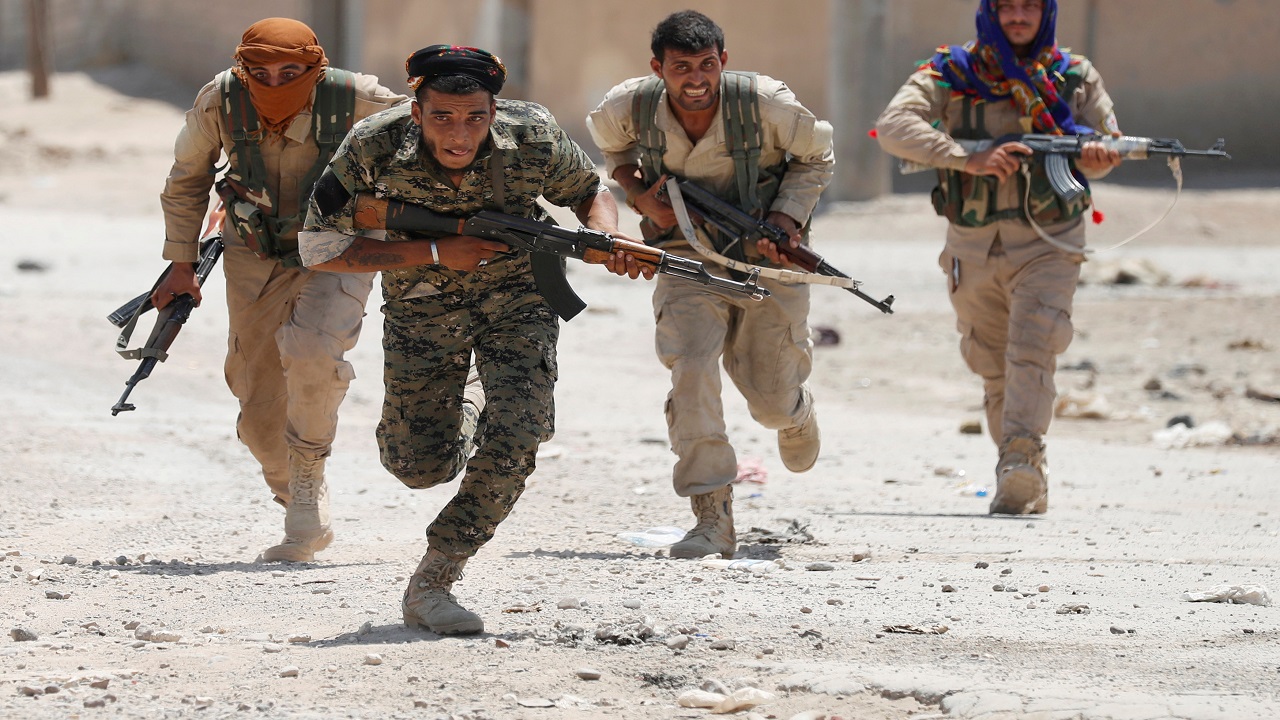 The withdrawal of United States troops from the region paved for Turkey to take over the Kurdish militia. (Photo Credit: Reuters)

Taking a complete U-turn, the United States in October this year withdrew its forces leaving the Kurdish forces in Syria with a feeling of ‘betrayal’. With the US' exit, Turkey got the chance to flex its muscles against the Kurdish forces in Syria. The decision by Trump administration was seen as an 'abandoning a close ally' in the US itself. However, Defence Secretary Mark Esper had reasoned that most forces would be redeployed to western Iraq to continue operations against the Islamic State. The American action against Islamic State in Syria gave room to the Kurdish forces to expand its territory. It allowed them to take over the governance of land seized from the extremists. The Kurdish forces backed by America, however, became a source of great anxiety for the Turkish government, which considers it a threat to national security. The withdrawal of United States troops from the region paved for Turkey to take over the Kurdish militia, the potential threat for Ankara. 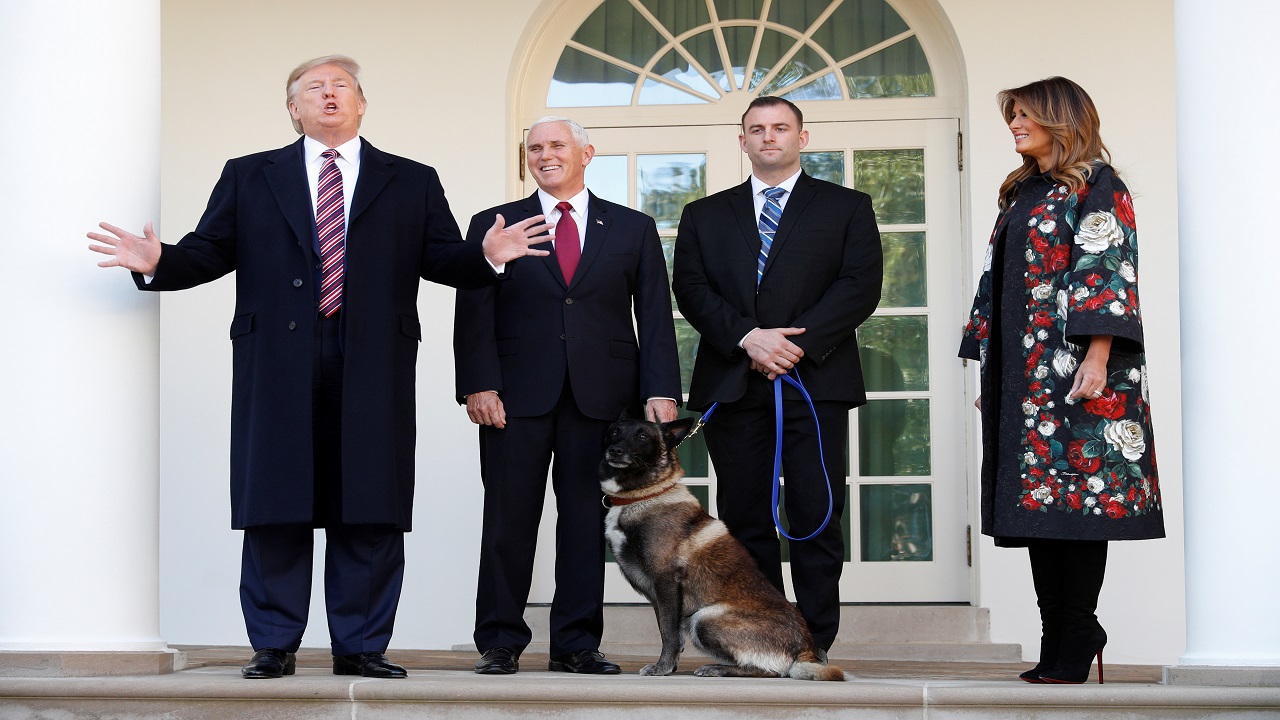 Conan also got into headlines as it chased down Baghdadi even after getting injuries during the raid. (Photo Credit: Reuters)

After the elimination of the then Al-Qaeda chief, Osama Bin Laden in Pakistan's Abbottabad in 2011, killing of Abu Bakr Al-Baghdadi this year once again bolstered American resolve of fighting terrorism. US President Donald Trump on October 29, 2019, announced that Abu Bakr al-Baghdadi was "dead as a doornail". While being chased inside a dead-end tunnel during a raid by US Special Operations forces, the ISIS chief blew up his suicide vest. Baghdadi's remains were then buried at sea, said US officials. It is being reported that Syrian Kurds were the key source of intelligence for the American agencies. Moreover, a US military dog, Conan also got into headlines as it chased down Baghdadi even after getting injuries during the raid. Conan, a Belgian Malinois military service dog, was further honoured by US President Donald Trump. 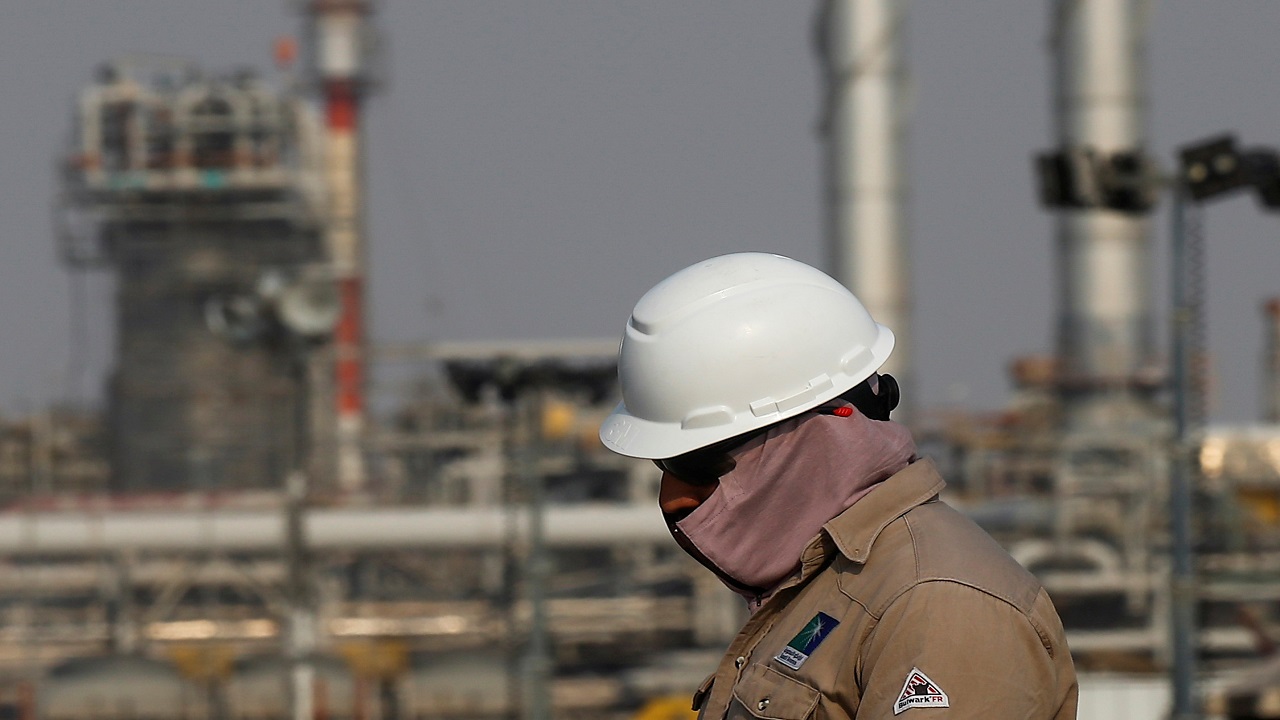 The Saudi defence was breached and they were forced to fire haphazardly and sporadically. (Photo Credit:Reuters)

The situation which brewed up after the unilateral withdrawal of United States from Iran's nuclear deal, with five permanent UNSC member plus Germany, further deteriorated when Saudi oil facility, Aramco was attacked by drone on September 29, 2019. The attack on Aramco, Saudi oil facility, posed worrying signs for not only the Kingdom which was at the receiving end, but also for the US that has always stood as its protector. Although the Houthi rebel group based in Yemen claimed responsibility for the attack, the United States, a key Saudi ally, blamed Iran for it. The Saudi defence was breached and they were forced to fire haphazardly and sporadically. The attack and its repercussions were not confined to the United States, Saudi Arabia, and Iran only. Russians also sensed a chance to take on Washington for 'failing' to secure the Saudi oil facility. Taking a pot-shot at US air defence systems in the aftermath of attacks on Aramco, Russian Foreign Ministry spokesperson Maria Zakharova said, "We still remember the fantastic US missiles that failed to hit a target more than a year ago, while now the brilliant US air defence systems could not repel an attack." In a meeting with Turkish and Iranian leaders in Ankara, Russian President Vladimir Putin went further by suggesting that Saudi Arabia would have been saved from the attack had they purchased a Russia-made missile defence system. On June 9 this year, protesters as many as close to a million marched in the streets. (Photo Credit: Reuters)

The introduction of Fugitive Offenders Bill by the Hong Kong government in February 2019 created an uproar in the region, which further culminated in protests. The bill, if passed, would have allowed the extradition of criminal fugitives who are wanted in territories with which Hong Kong does not currently have extradition agreements, including Taiwan and China. It was seen as an effort to undermine Hong Kong's autonomy and throttle civil liberties there. The bill received flak domestically and from abroad. On June 9 this year, protesters as many as close to a million marched in the streets demanding Chief Executive of the Hong Kong Special Administrative Region of the People's Republic of China, Carrie Lam to step down. Finally, on September 4, after 13 weeks of protests, the official announcement came from Lam regarding the withdrawal of the contentious bill. However, the final withdrawal was made on October 23. Moreover, Chinese President Xi Jinping in December sent a strong message to Hong Kong and Macau by spelling out his vision of a successful "one country, two systems". He reiterated that Beijing's governing principle was the only way forward for a bright future for both-Macau and Hong Kong. He further warned of any foreign interference in their affairs. The bombings claimed the lives of more than 300 people which included at least 44 foreign nationals. (Photo Credit: Reuters)

Shattering a decade of peace in Sri Lanka, coordinated terrorist suicide bombings in Colombo’s three churches and three luxury hotels on April 29, 2019, stunned the Island nation and the world as a whole. The bombings claimed the lives of more than 300 people which included at least 44 foreign nationals, said Sri Lankan foreign ministry. It was reported that nine suicide bombers, including a woman, were involved in the massive Easter bombings. Moreover, sixty people were arrested for possible links to the multiple attacks carried out in the capital city. In the aftermath of the attacks, a two-member team from India's National Investigation Agency (NIA) had visited Sri Lanka. The team had held discussions with authorities there about claims that some terrorists, belonging to the terror group ISIS, had travelled to India, including Kashmir. Earlier on March 15, 2019, massive shootings in Al Noor mosque in New Zealand's Christchurch claimed more than 50 lives. The man responsible for the attack, Brenton Tarrant, 28, was later arrested and was charged with 51 murders. The trail is expected to start in June 2020. 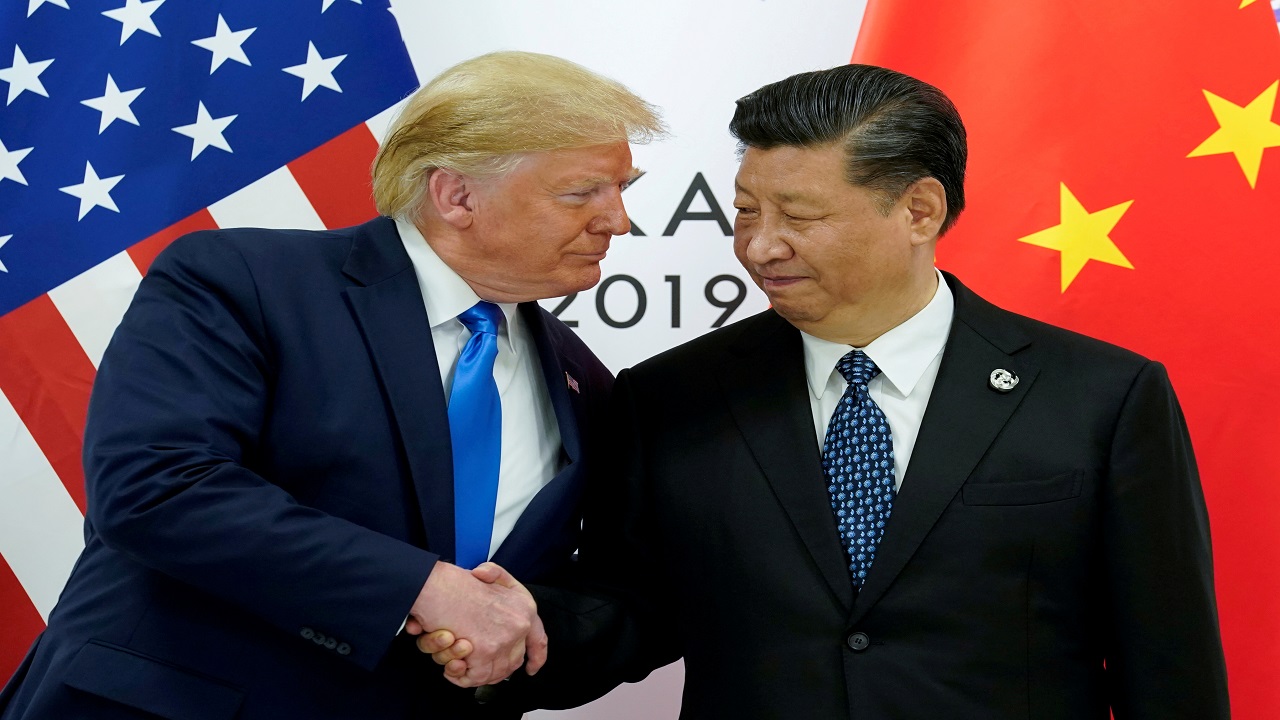 An IMF report says that the repercussions of the US-China trade war will spread world-wide. (Photo Credit: Reuters)

The United States-China trade dispute has stretched for over 18 months. Each of them has imposed tariffs billions of dollars on each other's products. On one hand, President Donald Trump has accused China of unfair trading practices and also accused it of intellectual property theft. China, on the other hand, blames the US for trying to curb its rise as a global economic power. An IMF report says that the repercussions of the US-China trade war will spread world-wide causing slowdown as it is set to reduce the global GDP by 0.8 per cent by the beginning of next year. So far in 2019, the US has imposed tariffs worth USD 550 Billion on Chinese goods while China in return has exclusively levied USD 185 Billion tariffs on US goods.