The Gandhi Scion Was Also Clicked With Several Other Party Members While Taking A Tea Break At A Shop In Chokkad Of Malappuram District.

Days after his massive win from the Wayanad parliamentary seat in the recently concluded Lok Sabha elections 2019, Congress president Rahul Gandhi on Friday began his three-day thanksgiving visit to Kerala. Gandhi, who arrived at Kozhikode airport around 2 pm this afternoon, has started his visit with a roadshow at Kalikavu in Malappuram district of the southern state.

During his roadshow, the Congress chief can be seen waving at supporters as he makes his way through the roads of Wayanad in an open truck covered with a canopy owing to the pre-monsoon showers. However, rains could not beat his supporters and a sea of humanity walk along the truck, holding banners that read "We are with you, Rahul" and "IYC(Indian Youth Congress) need you to lead us".

Thanking the people of Kerala for showing faith in him, Gandhi told the crowd, "I will fight for the people of Wayanad. I will take up the issues of Wayanad inside and outside Parliament. I will work for the constituency, work with you, listen to you".

"I will speak for the people of Wayanad. Thank you for all the love and affection shown towards me," Gandhi said, adding that he will work beyond politics, and for people from all walks of life, despite being a Congress man.

Gandhi, the newly-elected Wayanad MP, further promised to raise issues not only of his constituency but also of the people of the entire state in and outside Parliament. 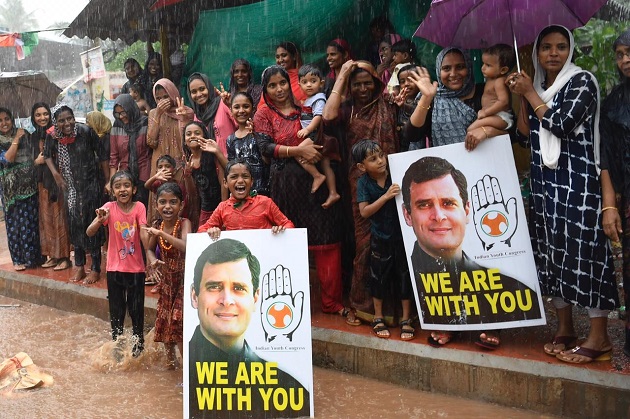 Later in the day, while addressing a public gathering in Nilambur, Gandhi launched a blistering attack on the current BJP government, saying Mr Narendra Modi spread hatred in the country and the Congress party knows and understands that the only way to combat hatred is through love and affection.

"We are committed to defending space of opposition, defending weak people in this country, defending people who are under attack by Mr Modi's policies and Mr Modi himself. I look forward to representing you&working with you to build a better Wayanad," the Congress chied added.

Rahul Gandhi in Nilambur, Kerala: We're committed to defending space of opposition, defending weak people in this country, defending people who are under attack by Mr Modi's policies & Mr Modi himself. I look forward to representing you&working with you to build a better Wayanad. https://t.co/gVJcwk663d

The Gandhi scion was also clicked with several other party members while taking a tea break at a shop in Chokkad of Malappuram district. He wasÂ accompanied by State Congress leaders Mullappally Ramachandran, opposition leader Ramesh Chennithala, MLA A P Anil Kumar, among others.

Kerala: Congress President Rahul Gandhi stops for tea at a shop in Chokkad of Malappuram district. He is on a three-day visit to the state, beginning today. pic.twitter.com/YP1Qgei6rR

In the recently concluded Lok Sabha polls, Gandhi won from Wayanad by a record margin of over 4.31 lakh votes. However, he lost Congress bastion Amethi in Uttar Pradesh to BJP leader and Union Minister Smriti Irani. Despite a disastrous performance in most parts of the country, the Congress won 19 of the 20 Lok Sabha seats in Kerala.

During his three-day visit, Gandhi is scheduled to participate in at least 15 public receptions across the constituency, spread over in the districts of Wayanad, Malappuram and Kozhikode. After visiting the facilitation centre at Wayanad collectorate, Gandhi will take part in various public functions organised by the party in the constituency. 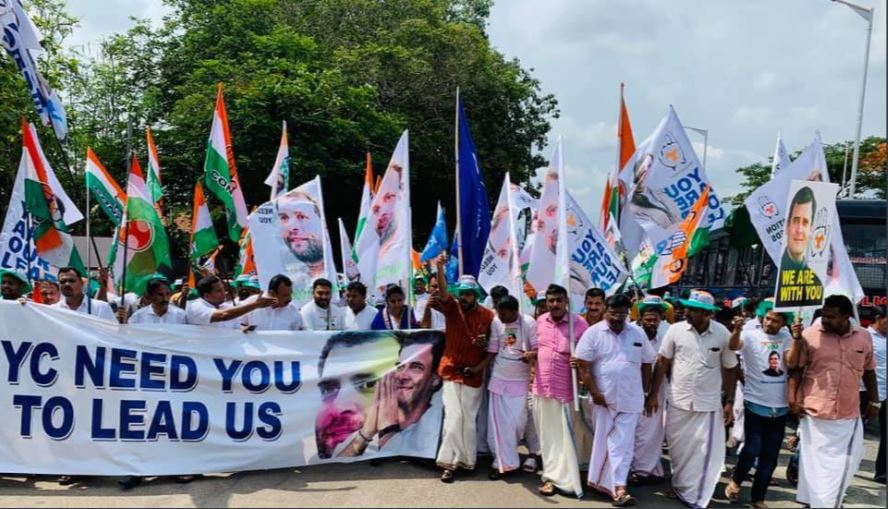 The Congress chief will be accorded reception at Kalpetta, Kambalkadu, Panamaram, Mananthavadi, Pulpally and Sultan Batheri and will also attend a roadshow in Kozhikode Assembly constituency on June 9, before leaving for Delhi.

Gandhi is also expected to visit the family of the 53-year-old farmer, Dineesh Kumar, who had ended his life after consuming a poisonous substance on May 23 at Panamaram in the constituency.

Earlier, in his first communication as an MP, Gandhi dashed a letter to Kerala Chief Minister Pinarayi Vijayan, requesting financial aid for Kumar's family. Vijayan responded, saying the issue of providing relief to the families of farmers who committed suicide over failure to repay bank loans, needs to be taken up in Parliament.

Thousands of Congress workers and leaders gathered at the airport to receive Gandhi, who is attending the first public function after the party's drubbing in the general elections.